Note: As votes are counted across Illinois on election night, you can track results live on NBCChicago.com and in the NBC Chicago app.

The 2020 general election is well underway in Illinois, with millions of people already requesting mail-in ballots, voting early or making plans to head to the polls on Election Day on Nov. 3.

Here's a look at some essential resources and information to help you feel prepared and informed as you perform your civic duty and make your voice heard.

How to register to vote in Illinois

Let's start with the first step. Are you registered to vote in Illinois? If you're not sure, you can check here by entering your name, address and birth date.

To register to vote in Illinois, you must be a U.S. citizen, 18 years old by Election Day and not serving a sentence in a penal institution because of a criminal conviction.

You can also take advantage of grace period registration through Nov. 3 in person at any early voting location in your jurisdiction or at your polling place on Election Day.

A full list of locations where you can take advantage of grace period registration can be found here.

How to vote in Illinois

There are three ways to vote in Illinois, with details on each listed below:

1: You can request a mail-in ballot and return it by either sending it through the U.S. Postal Service or by hand delivering it to your local election authority at an approved drop-off location.

2: You can vote early in person at an early voting location in your jurisdiction, open now through Election Day on Nov. 3.

3: On Election Day, you can vote in person at your precinct's specific polling place or, if your local election authority allows, at another voting location within your jurisdiction that will be open on Nov. 3.

Here's what you need to know about each of the three options:

How to vote by mail in Illinois

Anyone registered to vote in Illinois is eligible to vote by mail, no excuse needed.

Voters have until Oct. 29 to request a mail ballot, though election officials advise you apply much earlier, preferably by Oct. 15 in order to allow enough time for the ballot to arrive and be returned. To be counted, your mail ballot must be postmarked by Election Day and arrive within 14 days after.

You can find more information about voting by mail on the Illinois State Board of Elections website here or through your local election authority, which is where you can find an application to request a mail-in ballot.

If you requested to vote by mail and want to hand deliver your ballot, bypassing the U.S. Postal Service, you can do so in person at your election authority's office or the locations within your county listed here:

More than 2 million people in Illinois have requested mail-in ballots, shattering the previous record, as many officials have encouraged voting by mail to limit in-person interaction and crowd sizes as the coronavirus pandemic continues.

How to vote early in the Chicago area

If you want to avoid the rush and cast your ballot in person before Election Day, you have plenty of options. Here's the full list of early voting sites across Chicago, suburban Cook County and 10 of the area's suburban counties:

How to vote on Election Day

If you prefer to cast your ballot on Election Day, in most counties in Illinois you have just one option: your designated polling place. If you don't know where that is, enter your address below to find it:

New this year, all early voting sites in Chicago will remain open on Election Day for all voters in the city, as will six locations in suburban Cook County.

When are polls open on Election Day?

Polls open at 6 a.m. statewide, and will stay open through 7 p.m. But remember - if you are IN LINE when polls close, you can still vote! So if you're rushing to your polling place at the last minute, don't worry if you see a line - and don't let anyone try to dissuade you from casting your ballot.

See who's on your ballot in Illinois

There are so many important races happening in Illinois this election, so we've created a tool to help you learn who your representatives are - and who's running against them - before you vote.

For a complete sample ballot, including all local and judicial races as well as referendum questions, be sure to visit your local election authority's website. But to find out who you can vote for in many of the major races (presidential, congressional, statehouse and more), enter your address below:

Who’s On Your Ballot?

Find out who will be on your Illinois ballot in the 2020 general election.

What are the races to watch in Illinois?

There are countless races up and down the ballot across Illinois with fascinating and important narratives, some garnering national attention in a contentious and high-stakes election cycle.

Here's a look at nine of the biggest races you should be watching in the Chicago area and across the state:

What questions will be on the ballot?

Nearly every election includes some sort of referendum, or questions on a certain topic, and this year is no different. In addition to voting for your candidates of choice, you can weigh in on issues specific to your jurisdiction.

You can find the questions that will be asked of Chicago voters and suburban Cook County voters below:

Not in Cook County? Check your county clerk's website to see a full list of referendum questions as well as a sample ballot.

How to research judges on the ballot

A majority of the names on your ballot this election are judges, who are either running for the first time to fill a vacancy or are up for a retention vote, which is a yes-or-no vote to keep a judge on the court after each term on the bench is up.

Judges in Illinois are elected from specific districts or circuits, not statewide, so the judges on your ballot will be different based on where you live.

Then there's Illinois' circuit court system. The state's 24 judicial circuits deal with millions of legal cases every year, on everything from crime to civil lawsuits, divorce, adoption, eviction, traffic tickets, workers' compensation, wills and more - if it involves the law, it goes through the court system.

There are two types of judges in Illinois' circuit court system: circuit judges, who are elected by voters for a six-year term and then up for a retention vote thereafter, and associate judges, who are appointed by other judges. 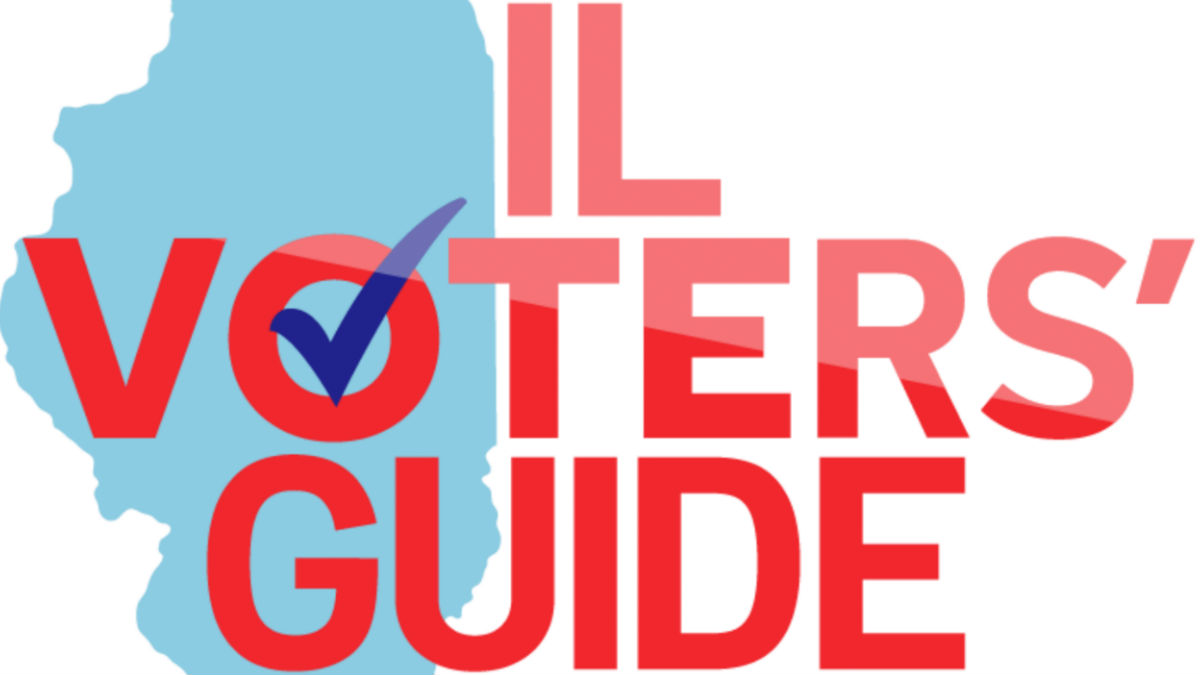 In Cook County, two-thirds of the roughly 400 judges are elected - either countywide or on a subcircuit, which is a particular portion of the county, similar to a district. This year, there are 62 judicial retention elections on the ballot in Cook County and dozens more retention votes in other circuits around the state.

There are plenty of resources to help you decide who to vote for and who to retain, including evaluations of each judge by several local bar associations (organizations made up of attorneys). You can find those recommendations on judges' qualifications from organizations like the Chicago Bar Association, the Chicago Council of Lawyers and the Illinois State Bar Association, among several others, on VoteforJudges.org.

For a more in-depth analysis, Injustice Watch has compiled information on each judge, including which division of the court they're in, any noteworthy cases, a record of reversals of their rulings, how harsh or lenient they tend to be in sentencing, and more.

How to listen to NBC 5's new election podcast

NBC 5 has debuted a new podcast called "The Illinois Voters' Guide” which examines contests and issues about which voters will be making decisions when they fill out their ballots this election.

Phil Rogers talks with reporters working on the station's broadcast and digital teams about important issues, and the people behind them.

In part one, political editor Carol Marin and political reporter Mary Ann Ahern discuss the race for Cook County State’s Attorney, which has been marked by controversial decisions by incumbent Kim Foxx involving actor Jussie Smollett, and the release of hundreds of offenders from Cook County Jail.

Part two is a look at some of the biggest races on the ballot in Illinois this election cycle as well as an exploration of political trends playing out across the state.

Episodes of “The Illinois Voters' Guide” will be released every Thursday ahead of the election. Listen below and wherever you find your podcasts.

What should I bring to vote in person?

If you are taking advantage of grace period registration, you need to bring two forms of ID, one with your address, like a utility bill, bank statement, pay stub, etc.

If you are already registered to vote at your current address, you do not need a government-issued photo ID to vote under Illinois law. But it can be helpful to bring one should any questions about registration, address, signature, or more arise during the voting process.

And if you need notes to help you remember which candidates you want to vote for, go ahead and bring them! You are legally allowed to bring written or printed materials into the voting booth to assist you.

Can I take a ballot selfie?

NO. In Illinois, ballot selfies are prohibited by state law. It's a felony to mark your ballot so another person can see how you voted, carrying a potential prison sentence of one to three years.

State election officials have long said it's "unlikely" anyone would be prosecuted for a ballot selfie, but you should play it safe and take a picture of your "I Voted" sticker or pose next to the polling place sign instead.

What should I do if I run into any problems voting?

While millions of people will cast their ballots without any issues, some may be challenged on their voting eligibility, experience voter intimidation, or have trouble at their polling place.

If you run into any issues at all, or simply have questions about the process, you are encouraged to call the Election Protection hotlines at:

The hotline is run by a nonpartisan coalition of more than 100 organizations, led by the Lawyers' Committee for Civil Rights Under Law.

How to get live Illinois election results

Live Election Day coverage will air on NBC 5 throughout the evening and at 10 p.m. You can also track up-the-minute race results live right here on NBCChicago.com or through the NBC Chicago app, where you can turn on notifications to be the first to know about winners of the biggest races.