The Chicago area is seeing its biggest snowfall of the season on Tuesday as a winter storm that began Monday continues to hit the region, leaving several inches of snow on the ground in parts of the region.

Here are the latest updates on the winter weather across the Chicago area:

Tuesday morning into the afternoon, the Chicago area will continue to see snow with additional lake-enhanced snow showers. Forecast models show the snowfall diminishing by Tuesday afternoon, leaving behind an additional 1 to 3 inches of accumulation.

Once the center of the storm passes to the east, the snow will wind down, but for areas along Lake Michigan it could be replaced by lake effect snow showers later Tuesday afternoon and evening, continuing into Wednesday morning for some.

These showers have the ability to produce quick accumulations in any given location where they set up. They could also move east into northwest Indiana before ending later in Wednesday afternoon.

Chicago's Streets and Sanitation Department Transitions to Clearing Side Streets

Chicago’s Department of Streets and Sanitation has transitioned its snow vehicles to clear snow from residential streets after clearing main roads and arterial streets, the department says.

The city of Chicago has received nearly six inches of snow since the storm began Monday, and could see more as lake-effect snow is possible through the early evening hours.

DSS staff will continue to monitor conditions through the city, and will spread salt and plow streets as needed, the department said.

Snowfall totals are still on the rise in many places across the Chicago area, with six or more inches falling in some locations.

Many of the largest snowfall totals were reported in Cook County. In Palatine, weather spotters reported 6.7 inches of snow, while in Evanston, 6.1 inches of snow have fallen so far during the storm.

At Chicago's O'Hare Airport, 5.8 inches have been reported.

You can check this link for the most up-to-date snowfall totals.

A winter storm warning took effect for most of the region Monday afternoon and remains in effect Tuesday morning.

Here's a breakdown of weather alerts and a look at what you can expect as the system continues to hit Chicago and the surrounding suburbs.

A winter storm warning issued by the National Weather Service took effect at 1 p.m. Monday in DeKalb, Kane, LaSalle, Kendall and Grundy counties. That warning will run through 12 p.m. on Tuesday. In McHenry County, the warning went into effect at 4 p.m. Monday and also expire at noon Tuesday.

For a look at the timeline of when the system is expected to move out of the Chicago area, click here.

How much snow has fallen across the Chicago area? Click here for a look at snow totals from the National Weather Service, broken up by county.

Schools across the area are shifting to e-learning or closing their doors on Tuesday as a result of winter weather that's expected in the area.

For the most up-to-date information, you can visit the running closures list here.

Flights Canceled at Chicago Airports Due to Winter Storm

More than 150 flights were canceled at the city’s major airports on Monday as the winter storm approached the Chicago area, according to the Chicago Department of Aviation.

According to the CDA's flight tracker website, more than 100 flights were canceled at O’Hare International Airport, with just under 50 flights canceled at Midway Monday afternoon.

The Chicago Department of Streets and Sanitation said early Tuesday that it had deployed more than 200 snow vehicles to begin clearing snow from residential streets.

Salt spreaders have also been deployed, the city said, with agency staff monitoring weather and ground conditions to adjust resources as needed.

The Illinois Department of Transportation also mobilized its fleet of snow vehicles to combat the storm, with salt spreaders and plows to keep roads safe.

“Our crews at IDOT are mobilized and prepared for the return of winter weather this week,” Acting Illinois Transportation Secretary Omer Osman in a statement. “As always in periods of inclement weather, the safest option is to stay home. If you must drive, slow down, give the road your undivided attention and please do not crowd our plows.”

The department says it will have more than 1,800 pieces of equipment and trucks available statewide, and crews will work throughout the storm to salt roads and to plow snow.

The Illinois Tollway is also deploying its fleet of nearly 200 snowplows to cover the highways under its jurisdiction, and will activate the Snow Operations Center to coordinate responses to the storm.

Drivers whose vehicles become disabled during the storm are being asked to remain in their cars, activate their hazard lights, and to call *999 from a phone to ask for assistance from the Illinois Tollway and Illinois State Police. Drivers will be asked to provide the roadway, direction of travel and the nearest milepost or cross road to help authorities locate their vehicles.

ComEd opened its Emergency Operations Center Monday in anticipation of the winter storm, saying it was also "getting equipment and additional crews in place to respond to potential power interruptions."

The utility giant's priority in responding to outages caused by storms is focused on restoring facilities like police and fire stations, nursing homes and hospitals first, ComEd said, followed by areas with the greatest number of customers.

ComEd urged customers to contact the company immediately if they experience a power outage, saying they can text OUT to 26633 (COMED) to report an outage and receive restoration information, call 1-800 EDISON1 (1-800-334-7661), or report outages via the website at ComEd.com/report.

The Illinois Department of Transportation said Monday night that the ramp from the inbound Chicago Skyway onto the inbound Dan Ryan Expressway was closed due to hazardous conditions.

According to a message posted to social media, the ramp was shut down Monday evening as a result of the weather, which is bringing snow, gusty winds and slippery conditions to the region.

Roads in Kankakee County Becoming Dangerous as Surfaces Freeze Over

According to the Kankakee County Sheriff's Department, motorists were asked to stay home unless necessary, with dropping temperatures and mixed precipitation causing hazardous travel conditions.

Kankakee County is one of multiple counties under an advisory until Tuesday afternoon, with icy precipitation and gusty winds both posing a threat to travelers.

Gloves, hats, mittens, shovels and salt flew off the shelves Monday at suburban Chicago stores as the area braced for what could be the largest snowfall of the season so far. NBC 5's Chris Coffey reports.

You can track the storm with our interactive radar here, or on this page: 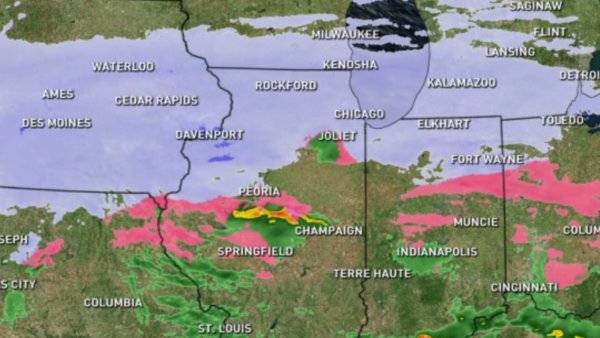 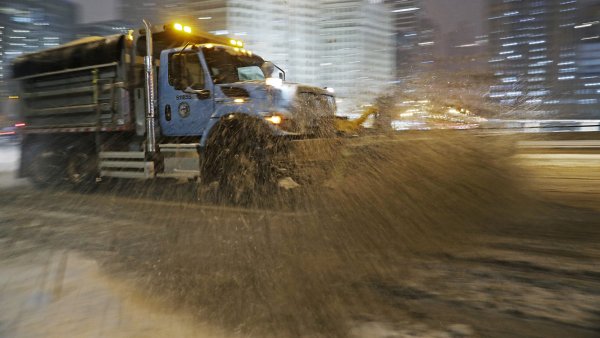