Here are the latest updates on the coronavirus pandemic across the state of Illinois today, Jan. 19:

Chicago moved out of Tier 3 mitigations this week and down to Tier 2, but could the city soon ease restrictions even further?

Almost all of Illinois was allowed to loosen certain restrictions this week after Illinois health officials changed the statewide guidelines.

"There had been some conversation about whether the non-hospital capacity needed to be included and the state has made a decision that that does not need to be included at this point, which we fully agree with, because you do need to also see your number of COVID cases that are hospitalized going down," Arwady said. "So here in Chicago, our number of COVID cases in the hospital is going down well, our ICU capacity adequate and our positivity had come down. And so really, as of now, still in restaurants and bars, there is no indoor service. That's allowed in the next tier, which we may possibly be able to move toward as early as, you know, possibly over the weekend, early next week, depending where this number goes." 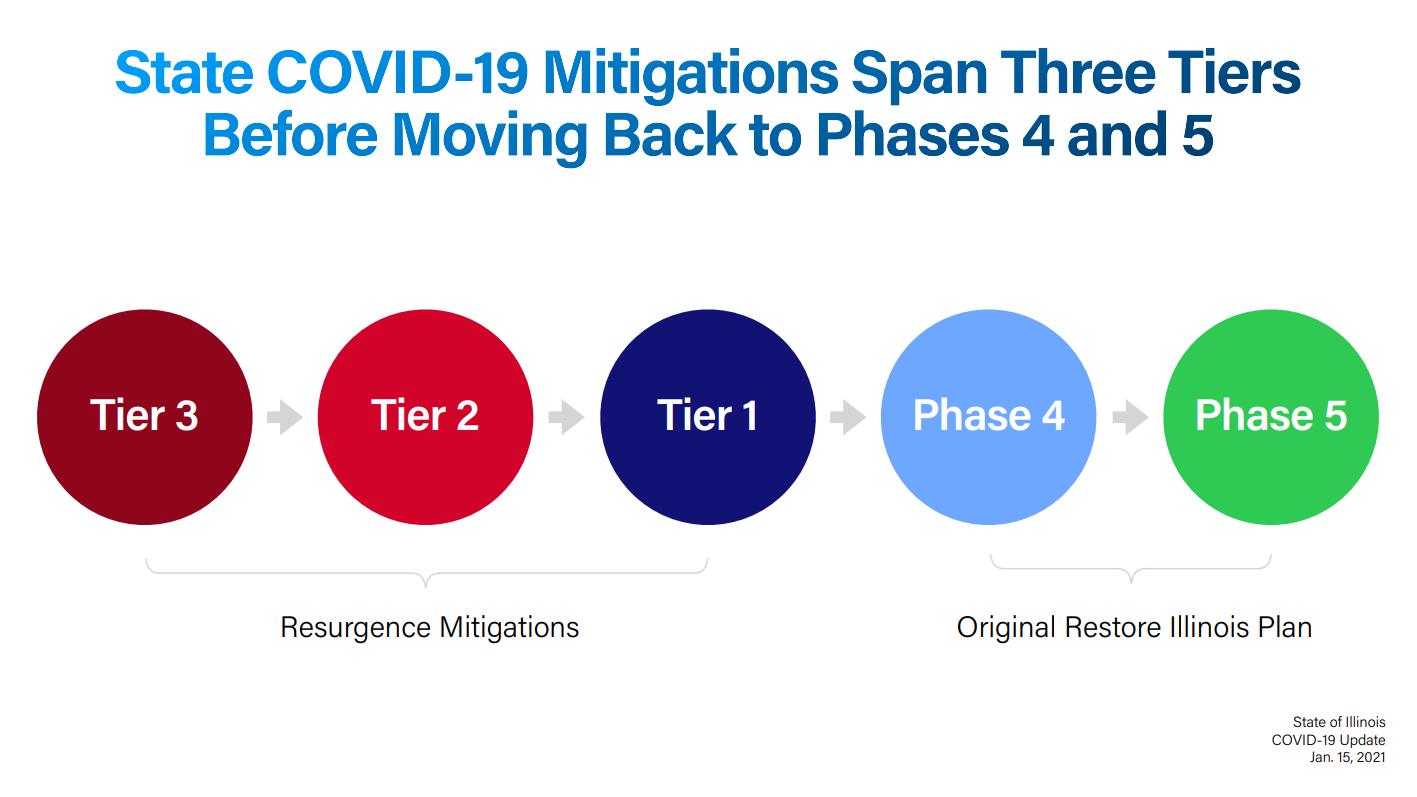 Much of Chicago Area Moves to Tier 2 COVID Restrictions: Here's What That Means

After Chicago moved into Tier 2 mitigations Monday, the Shedd said the facility is prepared to "safely reopen" to members Jan. 27.

For three days following the opening, members will have exclusive access to the Shedd before the aquarium opens to the general public on Jan. 30, according to a release.

Tickets will go on sale to members Thursday at noon, the Shedd said. The general public can purchase tickets beginning Saturday at noon.

Illinois Gov. J.B. Pritzker and Cook County Board President Toni Preckwinkle announced the launching of four state-supported coronavirus vaccination sites, as health officials aim to get through the first phases of the vaccination process.

The sites will be operated with the assistance of the Illinois National Guard, according to a press release. Vaccinations began Tuesday at the sites, and shots will be available for health care workers who are part of Phase 1A in the state’s vaccination plan.

“Illinois is moving forward with an aggressive vaccination plan that centers equity and focuses on communities which have been disproportionately impacted by COVID-19,” Pritzker said in a statement. “Standing up these sites is a pivotal first step of a plan that coordinates our 97 local health departments statewide, who operate clinics already and will open up more as vaccine supply grows.”

Those looking for information on vaccinations are encouraged to visit the Cook County Department of Public Health’s website.

Here's a list of locations open for health care workers who still need to be vaccinated.

Under Phase 1A of Illinois' vaccination plan, doses are currently only available to health care workers and residents of long-term care facilities. Phase 1B, which will center on residents aged 65 years and older and "frontline essential workers," is slated to begin next Monday, Jan. 25., Gov. J.B. Pritzker announced.

In order to receive the vaccine, which will be administered by the Lake County Health Department, an individual must register on the AllVax Portal and have a confirmed appointment, according to a news release.

When the Health Department receives a shipment of vaccine doses, officials said, a number of people who are eligible to receive the vaccine are notified to schedule an appointment.

Anyone who lives or works in Lake County can register on the portal to be notified when it's their turn to be vaccinated.

The city of Chicago released new details about its coronavirus vaccine distribution plan on Tuesday, including tentative dates for when each of the next phases might begin, with a goal of opening vaccinations up to all Chicagoans over the age of 16 by the end of May.

Chicago is currently preparing to enter Phase 1B of its vaccination plan along with the rest of Illinois Monday, opening up doses for frontline workers and those over the age of 65.

Chicago Department of Public Health Commissioner Dr. Allison Arwady announced in a livestream on Tuesday that the city will tentatively look to enter the next phase, Phase 1C, on March 29, followed by Phase 2 on May 31.

"I want to be very clear that any dates we provide are purely speculative based on how much vaccine we get," Arwady said. "Right now here in Chicago we're getting 34,000 approximately first doses… per week and that is not even enough to be able to vaccinate 5% of the people who are going to be eligible in Phase 1B."

Health officials in Illinois reported 4,318 new cases of coronavirus on Tuesday, along with 33 additional deaths attributed to the virus.

According to the Illinois Department of Public Health, Tuesday's new cases brought the statewide total number of confirmed cases to 1,076,532 since the pandemic began. The fatalities reported Tuesday lifted the death toll to 18,291.

In the last 24 hours, Illinois officials said 71,533 test specimens were returned to state laboratories, putting the state at 14,898,528 tests performed during the pandemic.

The seven-day rolling positivity rate on all tests was 5.7%, while the positivity rate for unique individuals tested is at 6.9% - both down slightly from the day before.

As of Monday night, 3,335 patients in Illinois were hospitalized due to coronavirus. Of those patients, 713 were in intensive care units, while 395 were on ventilators.

As of Monday night, 508,732 coronavirus vaccines had been administered, including 69,976 for long-term care facilities, according to IDPH.  On Monday, 13,169 doses were administered.

The state is stepping up efforts to increase staffing at hospitals, and as a result officials have determined that the percentage of available hospital beds will no longer be used as part of the metrics required for a region to roll back coronavirus restrictions.

Originally, a set of four metrics were used to determine whether regions could roll back coronavirus mitigation rules, but according to state officials, hospital bed availability will no longer be included in that list.

Instead, the state will launch multiple health care staffing contracts to help increase hospital staffing, thereby increasing the number of “staffed” beds available for coronavirus patients. That change will reflect the wishes of health officials, who said that the usage of the “staffed beds” statistic was slightly misleading, as hospitals had enough bed capacity, but not enough staff to care for patients in those beds.

“With this surge staffing program, IDPH and hospital leaders feel confident that metrics can safely move away from utilizing medical/surgical bed limits to move across mitigation tiers,” state officials said in a statement.

The surge staffing program will be spearheaded by IDPH and the Illinois Emergency Management Agency. Hospitals will be allowed to submit requests for additional staffing to the state, according to a press release.

All other metrics thresholds to move between tiers and phases will remain the same, according to the state.

Illinois Loosens COVID Restrictions for Several Regions, Bringing Some Back to Phase 4

Monday marked a day of major changes as several Illinois regions were allowed to loosen their coronavirus restrictions even further as the state changed its mitigation guidelines.

Here's a look at where each region stands.

The state of Illinois will prioritize inmates in its second round of coronavirus vaccinations, placing the group ahead of those with high-risk medical conditions, according to updated information from the state's Department of Public Health.

In line with its first phase of vaccinations, Illinois began administering COVID-19 doses to hospital workers as well as long-term care facility staff and residents in December.

The second phase of the rollout, Phase 1B, will begin Jan. 25. It will include residents aged 65 years and older as well as "front line essential workers" such as first responders, education workers, corrections, childcare workers, grocery store employees and postal service workers.

According to updated guidance on the IDPH website, as of Jan. 18, inmates are now included in Phase 1B. This puts inmates ahead of persons aged 16 to 64 years old with high-risk medical conditions, which are listed in Phase 1C.

Also in that phase are other essential workers, which may include individuals in transportation, food service, housing, finance and energy fields.

Previously, "incarcerated/detained people and staff" were listed behind Phase 2, which included those with moderate comorbid conditions and people in homeless shelters, according to Illinois' COVID-19 vaccination plan, which was dated Dec. 4.

However, IDPH noted that the information included in the report was subject to change.

In a statement, the American Civil Liberties Union of Illinois applauded Gov. J.B. Pritzker's decision to move up inmates to Phase 1B, calling it a policy that "makes sense."

"We urge everyone to ignore the temptation of political attacks on this decision. The suggestion that someone should die from COVID complications simply because they are incarcerated fails to recognize the value of human life," the ACLU statement read in part. "Vaccinating prisoners will save lives in the facilities and in the communities surrounding them..."

However, one legislator who talked to NBC 5 said he doesn't believe healthy inmates should be vaccinated before people with COVID-19 risk factors.

"Why we are putting healthy prison inmates in front of people with high-risk medical conditions is something I fundamentally don't understand," said Illinois Sen. Dan McConchie, R-Hawthorn Woods.

According to the U.S. Centers for Disease Control and Prevention, "the prioritization of correctional staff and incarcerated persons differ by jurisdiction..." The CDC, however, noted that outbreaks in correctional facilities are often difficult to control due to the inability to physically distance, limited space for isolation and a short supply of tests.

The public health institute added "sub-prioritization planning for vaccination within this group may be necessary based on facility-level or individual-level factors."