Kyle Rittenhouse, a 17-year-old from Antioch, Illinois, was arrested and charged in connection with the shooting

In a passionate response during a press conference Thursday, Wisconsin Lt. Gov. Mandela Barnes questioned how a teenage gunman accused of fatally shooting two people in Kenosha was able to walk by police while armed and travel to his Illinois home before his ultimate arrest.

Underscoring national concerns about racial injustice in policing, Barnes pointed out the disparity between officers' apparent treatment of the armed teen following a fatal shooting and the treatment of Jacob Blake, who was shot at least seven times in the back by an officer.

"The guy's from out of town," Barnes said. "So think about how ridiculous that is. Who is he accountable to? Nobody. And for him to even be able to shoot somebody and still walk away from the scene. I mean, they talked about finding a knife inside of the car, not even on Jacob Blake's person, but this guy's carrying a long gun and kills somebody just walking freely, was able to get back home to Illinois then we've got a much bigger problem on our hands."

Kyle Rittenhouse, a 17-year-old from Antioch, Illinois, was arrested and charged in connection with the shooting, which took place amid turmoil after a Kenosha police officer shot Blake Sunday, potentially paralyzing him.

Rittenhouse faces charges of first-degree intentional homicide and first-degree reckless homicide, among others, following the shooting. The teen was taken into custody in Lake County, Illinois, Wednesday and is scheduled for an extradition hearing on Friday.

Social media footage surfaced surrounding the late-night fatal shooting during unrest. Witness accounts and video indicate the gunman first shot someone at a car lot just before midnight, but details on what sparked that shooting weren't immediately clear.

The alleged gunman then jogged away, fell in the street, and opened fire again as members of the crowd closed in on him, some appearing to kick and grab at his weapon. According to witness accounts and video footage, police apparently let the gunman walk past them and leave the scene with a rifle over his shoulder and his hands in the air as members of the crowd were yelling for him to be arrested because he had shot people.

When asked why the gunman was not arrested in the moment, Kenosha County Sheriff David Beth said he couldn't say for certain, but noted the chaos surrounding officers that night.

Barnes also discouraged vigilante groups from going into Kenosha streets armed during unrest. While it's not clear if Rittenhouse was acting as part of such groups, there were several armed citizens on Kenosha streets the night of the shooting.

"That's not normal behavior," Barnes said. "These people aren't out here as auxiliary officers. Police have all the support they need from the National Guard so if in fact that is the case that this sort of person is being celebrate as a vigilante as a militiaman then that's ridiculous and speaks to a much larger problem and it is completely discouraged. it's more than discouraged. that should never happen.... that is something that is completely horrifying. 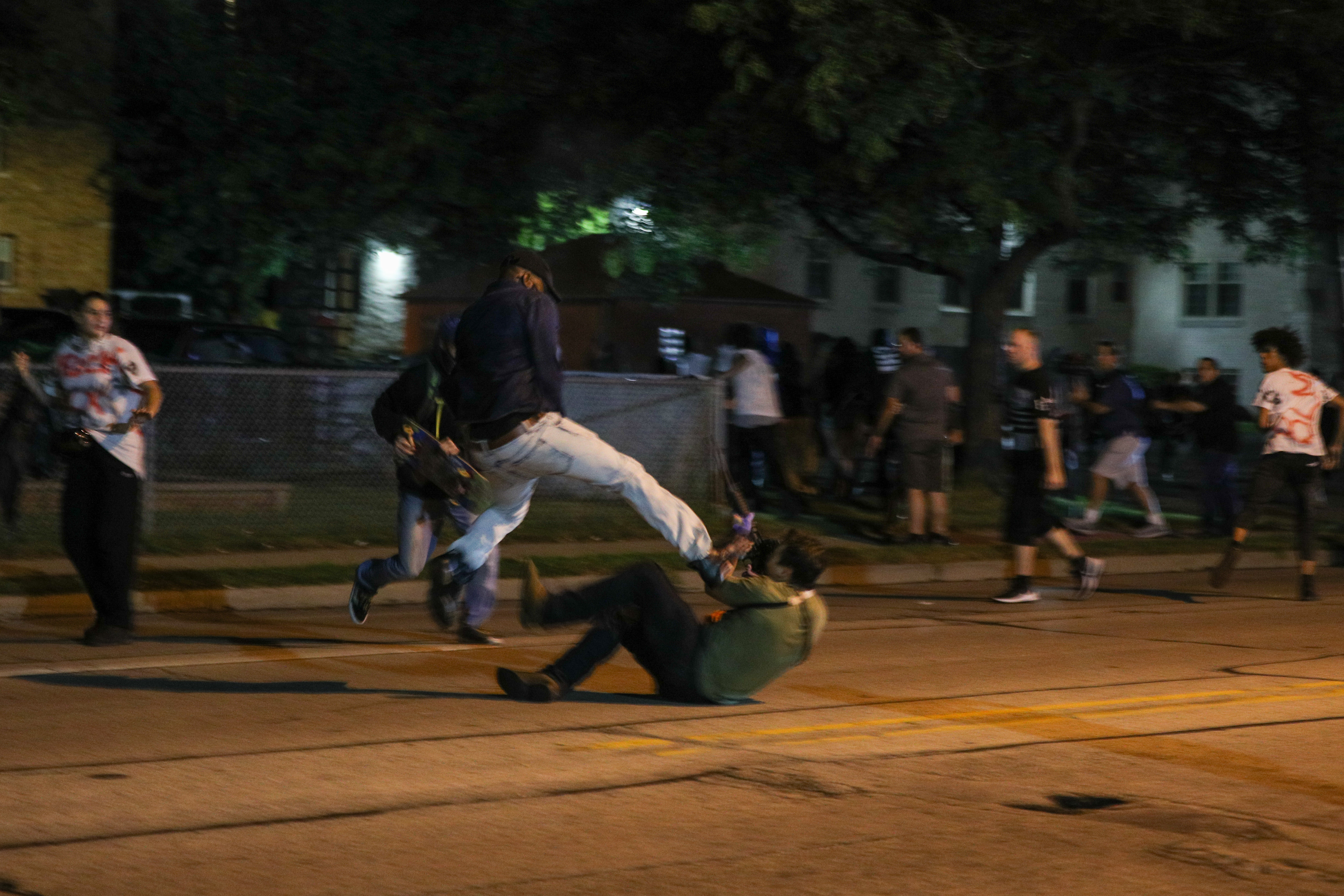 Additional photos from the scene Tuesday night showed what appeared to be multiple citizens armed with weapons as the unrest unfolded. Some stood outside area businesses and others were seen in the streets.

Kenosha County Sheriff David Beth confirmed there were so-called vigilantes or self-proclaimed militia groups on the streets, one of which even asked him to deputize them. It's unclear if Rittenhouse was connected to that group.

But video taken before the shooting shows police tossing bottled water from an armored vehicle to what appear to be armed civilians walking the streets. And one of them appears to be the gunman.

"When the Second Amendment butts up against the First Amendment my recommendation is simple: stay home," he said.