With tears streaming down her face, the mother of a young girl found dead following a frantic search in Joliet Township this week thanked the community for their support as she continues to grieve the death of her daughter.

"I want to say thank you to the community," an emotional Sheri Gordon said outside the home where a memorial for her 1-year-old daughter continued to grow. "I appreciate you guys for your love and support."

Sixteen-month-old Semaj Crosby was found dead Thursday in a home in the Chicago suburb, less than two days after her family reported her missing. Her death is being investigated as "suspicious," police said. 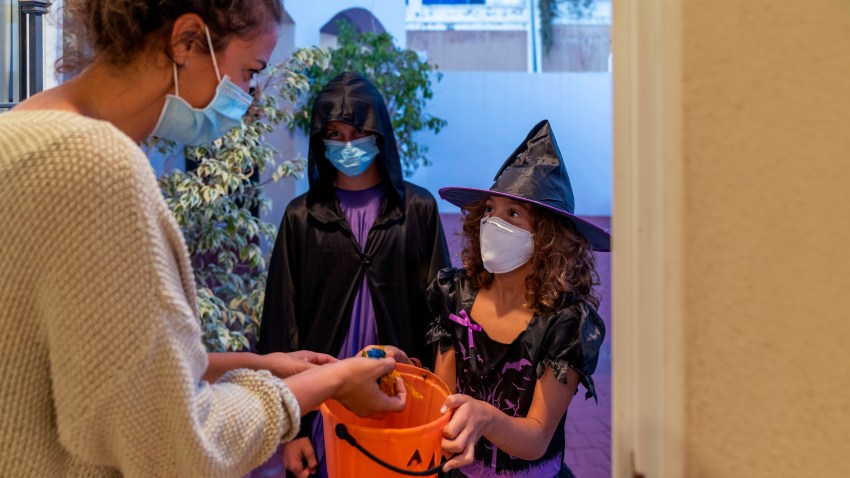 Lawyers representing Gordon released a statement on their Facebook page following the heartbreaking discovery of the 1-year-old’s body.

Chuck Bretz and Associates posted on its Facebook page Thursday evening the firm had been retained by Sheri Gordon to advise her in coordinating communications “between the various agencies involved.”

The Will County Sheriff’s Office, the FBI, Department of Child and Family Services and Will County Coroner’s office have all been involved to an extent in the investigation of Semaj Crosby’s death.

“Ms. Gordon is extremely distraught over the death of her only daughter. She will continue to support the investigation in this matter to the best of her abilities," the statement read. "She prays for her daughter and appreciates the community’s support in this matter. We look forward to when we can put this tragic incident behind us and allow the healing to begin.”

An autopsy on the body of young Semaj was completed Thursday. The cause of death, however, was pending further studies.

"We will continue to try and find out why this ended in such a tragic way," Deputy Chief Rick Ackerson with the Will County Sheriff's Office said during a press conference Thursday.

Semaj was found dead around 12 a.m. Thursday inside a home in the 300 block of Louis Road in Joliet Township, less than two days after she went missing from her home in the southwest suburb of Chicago.

Police have not confirmed if the home Semaj was found in is the same home she lived in before going missing.

The house is in the center of what had been a massive search area scoured by more than 100 officers, multiple teams of bloodhounds, divers and volunteers ever since the toddler was reported missing by her mother, Sheri Gordon, on Tuesday evening.

Gordon told authorities her daughter had been playing outside with other children before she wandered away. Semaj was last seen in the yard of the family’s Preston Heights neighborhood home with her cousins that afternoon, around 4 p.m., her mother said.

Ackerson said that early in the investigation, authorities noted the home Semaj lived in was in "very deplorable conditions."

Anywhere from five to 15 people typically lived in the home at a given time, officials said, adding that the attorney for the mother told them many of those residents were considered "squatters."

Investigators say the death of a 16-month-old girl reported missing earlier this week is being investigated as a "suspicious death," pending the results of an autopsy.

Just before Semaj went missing, investigators with the Department of Child and Family Services say they saw the little girl safe at the home. A spokesperson said the agency had visited the home that day and were investigating Gordon for an allegation of neglect.

DCFS investigators checked on the home at about 3:20 p.m., officials said, and all three of the Gordon’s children were there – including Semaj. About three hours later, at about 6:30 p.m., the family reported her missing.

Ackerson noted that while attempting to interview Gordon, another woman was trying to interrupt the conversation.

"She was pounding on the outside of the trailer trying to get [Gordon] to stop talking," he said.

Deputy chief Rick Ackerson noted that while investigators attempted to interview the girl's mother, Sheri Gordon, another woman was trying to interrupt the conversation. "She was pounding on the outside of the trailer trying to get [Gordon] to stop talking," he said.

The Will County Sheriff's Office said it was Gordon's attorney that helped authorities get consent to search the home on Louis Road around 11 p.m. Wednesday, before investigators found the body of the girl an hour later.

"Having kids of my own, it's tough," a teary-eyed Ackerson said of the heartbreaking discovery.