As Kyle Rittenhouse's murder trial enters its second week, what exactly have jurors been presented with so far and what is still expected?

Rittenhouse, 18, is charged with shooting Gaige Grosskreutz and fatally shooting Joseph Rosenbaum and Anthony Huber on Aug. 25, 2020. The one-time police youth cadet from Antioch, Illinois, was 17 when he went to Kenosha with an AR-style rifle and a medical kit in what he said was an effort to safeguard property from the demonstrations that broke out over the shooting of Jacob Blake, a Black man, by a white Kenosha police officer.

Rittenhouse is white, as are the three men he shot, but the case has raised polarizing questions about racial justice, policing, firearms and white privilege.

Here's a breakdown of the trial so far and what's ahead.

Attorneys spent the first week of Kyle Rittenhouse's murder trial sparring over who provoked whom, with prosecutors portraying the Illinois teenager as the aggressor and the defense working to show that the men he shot had threatened him.

Defense attorney Mark Richards went on the offensive during opening statements, telling jurors that Huber intended to “separate (Rittenhouse's) head from the body" when he hit him with the skateboard and tried to wrest his gun away.

Richards also has worked to persuade the jury that Rosenbaum was a menace. He got a police detective to testify that at various points during the night, Rosenbaum armed himself with a chain he stole from a construction site, set a Dumpster on fire and was walking around wearing his shirt as a mask.

Ryan Balch, a military veteran who carried a rifle and was with Rittenhouse at points, testified that Rosenbaum was “hyperaggressive,” had thrown rocks at his group and had threatened to kill “any of you guys” that he found alone that night. But another former veteran who was armed in the streets, Jason Lackowski, described Rosenbaum as a “babbling idiot” whom he didn't see as a threat.

The jury at Kyle Rittenhouse’s murder trial over a string of shootings on the streets of Kenosha watched one of the central pieces of video evidence Wednesday — footage of a man chasing Rittenhouse and throwing a plastic bag at him just before the man was gunned down. NBC 5’s Charlie Wojciechowski has the latest updates from the trial.

Richard McGinniss, a video journalist with the conservative website The Daily Caller who was recording events that night, testified that Rosenbaum chased Rittenhouse down and lunged for Rittenhouse's rifle.

Richards also noted in his opening statement that Grosskreutz was carrying a handgun when he approached Rittenhouse.

Assistant District Attorney Thomas Binger has pushed back, stressing repeatedly that Rosenbaum was unarmed when he was killed. He also has argued that Rittenhouse provoked Rosenbaum during a confrontation earlier that evening and that Rittenhouse chased him with a fire extinguisher before Rosenbaum turned the tables.

He got Balch to acknowledge on the stand that he never saw Rosenbaum strike anyone or carry a weapon. Binger also questioned McGinniss' description of Rosenbaum lunging toward Rittenhouse, raising the prospect that Rosenbaum was actually falling toward him — as McGinniss had said in a televised interview after the shootings.

Binger also has argued that Huber and Grosskreutz were trying to disarm Rittenhouse to protect others. He has said that Grosskreutz raised his hands in a universal “surrender” motion before he was shot. Richards maintains he dropped his hands and began to raise his pistol.

The fifth day of Kyle Rittenhouse's trial heard emotional testimony from the girlfriend of one of the men Rittenhouse shot and killed. NBC 5's Charlie Wojciechowski reports.

2. What Came of Hero Testimony at Rittenhouse Trial?

An effort by prosecutors to portray one of the men Rittenhouse shot as a hero never got off the ground.

Huber's great-aunt, Susan Hughes, was testifying about Huber in a matter-of-fact manner, talking about their relationship, how he ended up at the protest and how he always carried a skateboard.

As defense attorney Corey Chirafisi swiftly objected, Kraus posed another: “Had you ever seen Anthony Huber run towards danger?”

Without the jurors present, Chirafisi argued that if prosecutors were allowed to present evidence that characterizes Huber as a peaceful man, then the defense would be allowed to bring up evidence from Huber’s past that could paint a different picture.

That included criminal cases involving alleged violence Huber committed against his own family members, with the defense reciting in courtroom a detailed account of those allegations.

“I would normally not move to admit those,” Chirafisi said. “However, if they’re saying that this is a peaceful man... ."

A juror in the murder trial was dismissed after a court security officer reported that the man told a joke about the police shooting of Blake, which set off protests in the Wisconsin city where Rittenhouse is accused of shooting three people.

The judge presiding over the trial said the security officer reported the remarks earlier this week. Prosecutor Thomas Binger said the remarks as shared showed racial bias. Blake, who is Black, was shot by a white Kenosha police officer and left partially paralyzed.

It was a busy day in the murder trial of Kyle Rittenhouse, as a juror was dismissed for making a joke about Jacob Blake, and as witnesses recounted the events leading up to the fatal shootings. NBC 5’s Charlie Wojciechowski has the recap of the day in court.

When Schroeder called the juror into the courtroom to discuss what he said, the juror said he didn't want to repeat his comments. But Schroeder said it was “clear that the appearance of bias is present and it would seriously undermine the outcome of the case” and that the juror would be dismissed.

4. Prosecution Expected to Rest Its Case as Final Witnesses, Including Shooting Survivor, Testify

Prosecutors are near the end of their case.

On Monday, they called a man who suffered a severe arm injury when he was shot by Rittenhouse to the stand.

Gaige Grosskreutz says he confronted a rifle-toting Rittenhouse with a gun of his own to try to stop the bloodshed.

When asked what was going through his mind as he neared Rittenhouse, 27-year-old Grosskreutz testified, “That I was going to die.”

Grosskreutz, who was trained as a paramedic, testified that he volunteered as a medic at protests in Milwaukee in the days after George Floyd died under the knee of a Minneapolis police officer in May 2020. Grosskreutz said he attended around 75 protests before the night he was shot in August 2020, offering help to anyone needing medical attention.

“I believe in the Second Amendment. I'm for people's right to carry and bear arms,” he said, explaining why he was armed. “And that night was no different than any other day. It’s keys, phone, wallet, gun."

5. Rittenhouse Could Still Take the Stand

Kyle Rittenhouse could still take the stand as the defense prepares to make its case.

Rittenhouse has not spoken during the trial so far, but it is believed he could testify in the trial as early as this week.

Although his lawyer teased the possibility that the Illinois teen could address the jury, it remains unclear if that will in fact happen. 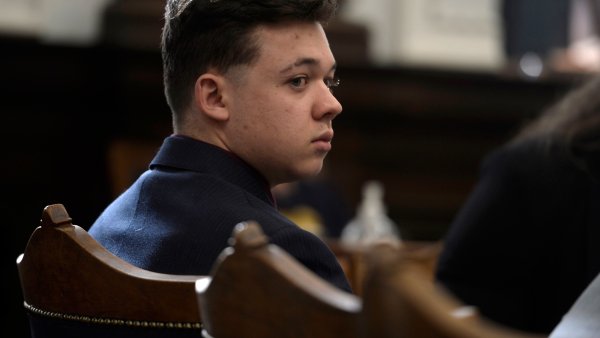