Here are the latest updates as the Winter Games begin

The competition for the 2022 Winter Olympics has officially started and the excitement will continue well before the Opening Ceremony begins this week, with local athletes set to make their Beijing debuts.

The U.S. women's hockey team began its first match in Beijing, with the game seeing some thrilling and equally frightening moments.

Here are the latest updates as the Winter Games begin.

Brianna Decker has been ruled out for the remainder of the 2022 Winter Olympics.

The assistant captain top-line center for the U.S. women's ice hockey team was stretchered off in the first period of the team's preliminary round game against Finland and did not return. She was seen after the game in shorts, crutches and a boot.

Why Was the US-Finland Hockey Game Score Changed at the Last Minute? Here's What Happened

The United States women’s hockey team thought it had finished off a 5-1 victory over Finland in their opening game of group play, but as the team celebrated and left the ice, they were told to come back in a bizarre scene.

As it turned out, 5-1 was not the final score of the game.

The United States started their quest to retain gold in women's ice hockey with a resounding 5-2 win over Finland in the preliminary round of the 2022 Winter Olympics in Beijing.

Alex Carpenter and Kendall Coyne Schofield each potted two goals in the opener for the Americans. Savannah Harmon recorded two assists and Amanda Kessel registered a goal and an assist. Maddie Rooney finished with 10 saves in the victory.

Kendall Coyne Schofield entered the 2022 Olympics as Team USA’s captain and one of the biggest stars in hockey, and she quickly proved that she’s comfortable on the international stage, as she scored two goals in 64 seconds during the team’s opener against Finland.

The captain extended her team’s lead to three goals in the second period of Thursday’s game with this absolute snipe.

Coyne Schofield showed off a different skillset just 64 seconds later when she managed to deflect home a shot from Cayla Barnes from near the face-off dot, making it 4-0 and giving herself her second goal of the young tournament.

The United States women’s hockey team is hoping to get their quest for a second-straight Olympic gold medal off to a good start, and Amanda Kessel made sure that’s exactly what happened as she scored the team’s first goal of the tournament.

Kessel, a Madison, Wisconsin-native and a long-time contributor to the U.S. squad, notched the power play tally in the first period of Thursday’s game against Finland:

Brianna Decker, an assistant captain on the United States' women's ice hockey team, was stretchered off in the first period of the team's preliminary round game against Finland.

Decker got tied up with Finland's Ronja Savolainen behind Finland's net and was taken out from behind.

She remained on the ice for a number of minutes before a stretcher came out for her.

Although the opening ceremonies of the 2022 Olympics in Beijing have not yet taken place, the women’s hockey tournament is set to get underway Thursday, with the United States looking to defend its gold medal in the event.

Two of the players who were on that roster in 2018, Kendall Coyne Schofield and Hilary Knight, have ties to the Chicago area, and both players are hoping that they can make history by helping the American squad to a second consecutive gold medal in the event.

If they are able to do so, it would be the first time in history that the United States has captured gold in back-to-back Olympics in the sport.

Team USA's first game is at 7:10 a.m. CT Thursday against Finland. The game will air live on USA.

Read more and see how you can watch it live here or click the link above.

Team USA's mixed curling team, which split its first two games on Wednesday, appeared in control of its third game of the 2022 Winter Olympics, taking a 6-3 lead into the sixth end against Norway.

The Norwegian team then called its power play and never looked back, sweeping eight straight points in the final three ends to hand the Americans their second loss in Beijing.

After falling to Italy in the set before, Team USA's mixed curling team of Christopher Plys and Vicky Persinger traded points with Norway through the first few ends Thursday, but with a pair of excellent shots in the fifth end — including a single throw that cleared three of Norway's stones from the house — leaped out to the 6-3 lead.

The United States plays Italy Wednesday evening and Norway Thursday morning at 12:05 a.m. CT in the next session.

Team USA does not play in the following session which is scheduled for 6:05 a.m. on Thursday.

Wednesday's 7:05 p.m. CT match against Italy can be watched on NBCOlympics.com, Peacock and USA.

The Olympic events for skiing also begin overnight, with women’s and men’s moguls freestyle skiing, which will take place at 4 a.m. CT and 5:45 a.m. CT, respectively. This will be the first round of qualifications for freestyle moguls.

See the full schedule of when to watch your favorite Olympic sports here. 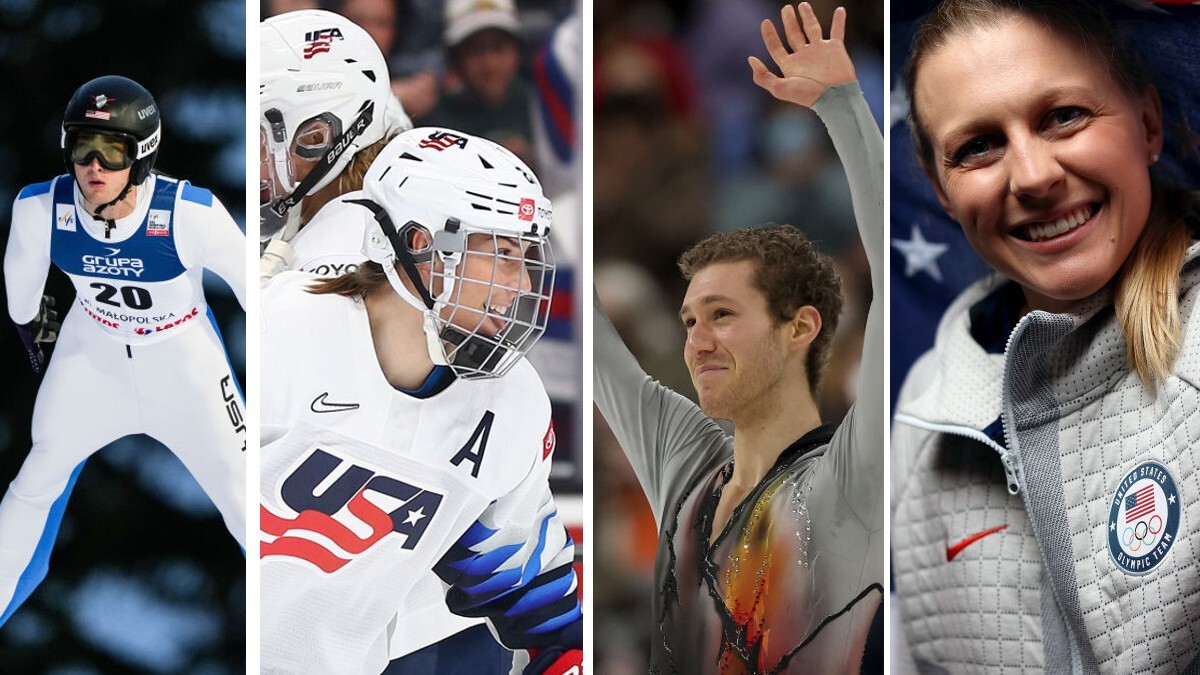 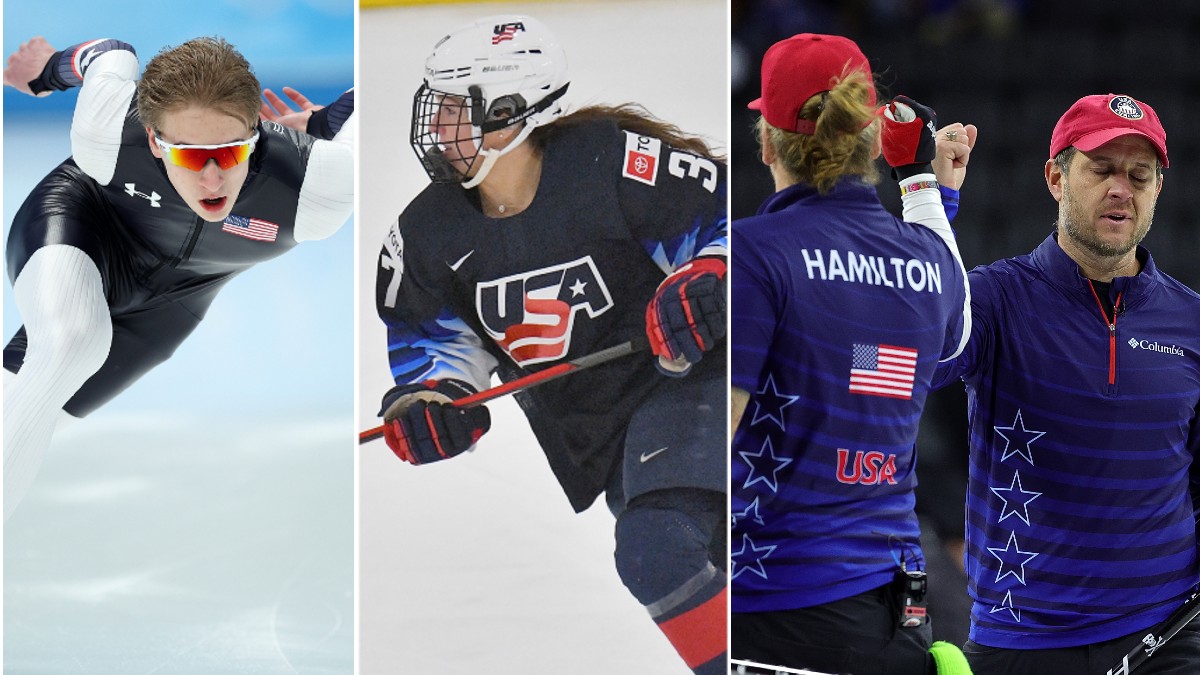 It was an emotional day, not just for John Shuster, but also for his family.

Shuster, a five-time Olympian who helped lead the men's curling team to its first gold medal during the 2018 Winter Games, learned Wednesday that he and fellow Team USA athlete Brittany Bowe had been selected as U.S. flag bearers for the Opening Ceremony at the 2022 Winter Games, considered one of the Olympics' greatest honors.

Watch the video here or below.

Watch the moment Team USA Curler John Shuster found out he would be a flag bearer for Team USA at the 2022 Winter Olympics and then watch him share the news with his wife and kids back home.

U.S. skier Kai Owens injured her face in a crash Tuesday during a moguls training run preceding the event's qualification round at the 2022 Winter Olympics.

The 17-year-old shared photos of her visibly bruised and swollen face to Instagram accompanied by an optimistic message:

"I took a little crash in training last night," Owens said. "I’m doing well, in high spirits, and working with our medical team to evaluate and make the best decisions. Thank you for all the well wishes!"

The Games have begun!

The 2022 Winter Olympics officially started Wednesday morning, beginning with four matches in curling mixed doubles. The United States' Vicky Persinger and Chris Plys stole the final two ends of their matchup to defeat Australia's Tahli Gill and Dean Hewitt 6-5 in the opener of the round-robin tournament.