In the most expensive race in Illinois history -- and one that's on track to be the most expensive, non-presidential race ever -- NBC News projects State Sen. Darren Bailey secured the Republican nomination in Tuesday's Illinois Primary Election, and will face Democratic incumbent J.B. Pritzker in the race for Governor in November.

With 98% of precincts reporting, Bailey received 57% of the vote. Trailing far behind Bailey is Republican candidate Jesse Sullivan, with only 16% of the vote.

In his acceptance speech, Bailey took aim at Pritzker on numerous fronts, saying that he doesn’t understand the plight of regular Illinoisans and that the Republican’s campaign will focus on making life easier for the state’s residents.

“Illinois is in trouble. Decade after decade of mismanagement, and back-to-back billionaire governors who don’t understand the struggles of working people,” he said. “And where has that gotten us? People and businesses leaving Illinois in droves, looking for work, affordable housing, lower taxes and better opportunities. They are leaving because Springfield and the political elites have failed every one of us.” 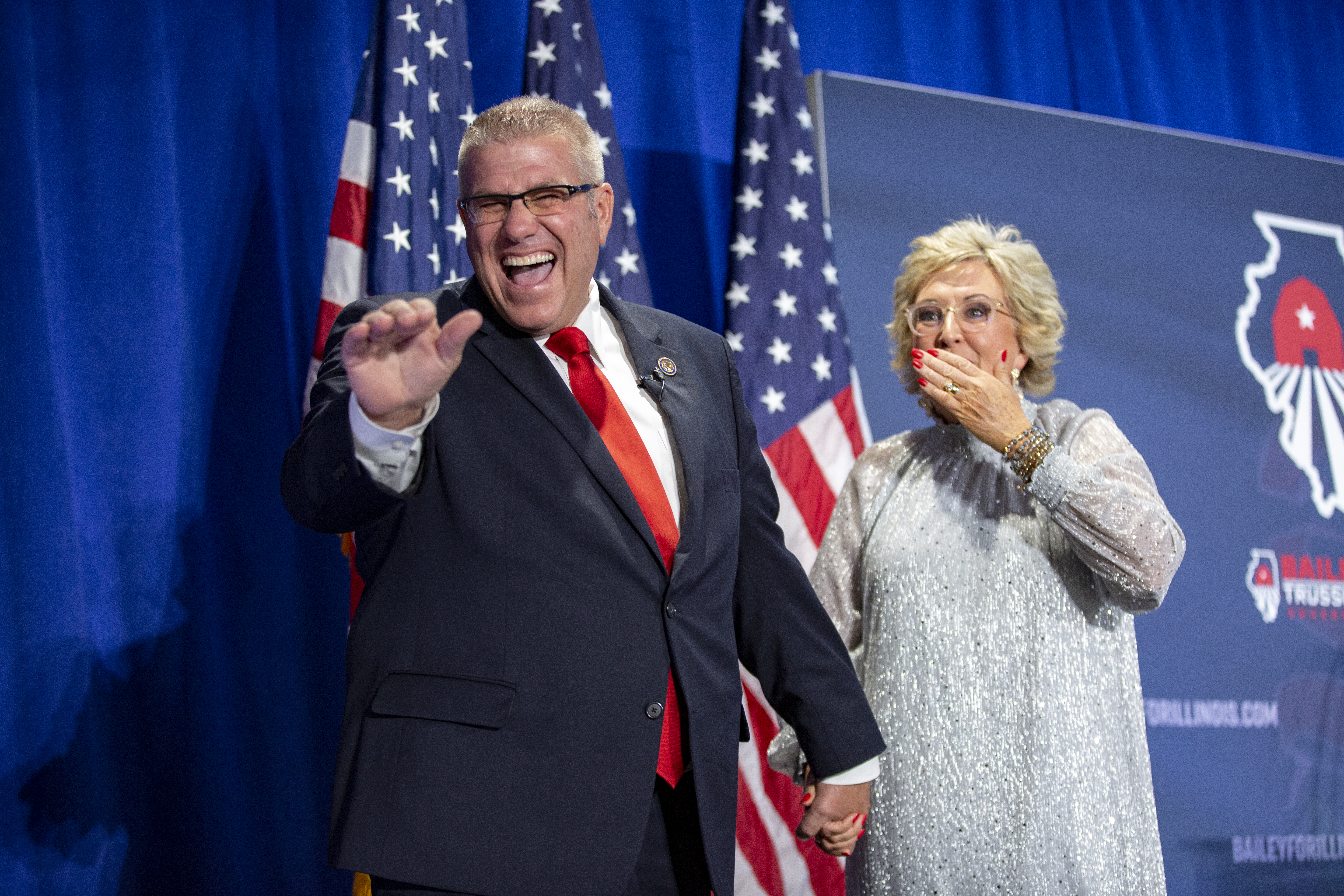 Bailey, who was elected to the state senate from Xenia, received significant downstate support and a coveted endorsement from former President Donald Trump in the late stages of the primary cycle.

Bailey fended off a crowded field of six Republican candidates that also included Aurora Mayor Richard Irvin, who was an early favorite in the campaign after using $50 million in donations from Illinois billionaire Ken Griffin to purchase a slew of televised advertisements.

Bailey in the General Election now faces Democrat incumbent Pritzker who swept the Illinois Primary Election for Governor Tuesday, winning 92% of the vote with 98% precincts reporting.

With the Democratic nomination for a second term secure, Illinois Gov. J.B. Pritzker took aim at Bailey and the Republican party on Tuesday night, blasting what he called “the radical right wing’s” extremism as he kicked off his general election campaign in earnest.

“We Democrats play by the rules. We respect our democracy. We honor the results of our elections,” he said. “We want to believe that surely the GOP can come together with us and agree on common sense things that will make life easier and better for most Americans. But it seems like lately, every time we extend a hand to the other side, it’s met with scorn, and we feel like Charlie Brown looking back at Lucy holding the football.”

Pritzker also took time to blast the Supreme Court’s recent decision to overturn a woman’s right to an abortion, and emphasized his fight for abortion rights as part of his platform.

“In the face of what’s happening in this country today, in the face of what the Supreme Court and the radical right wing are trying to do to the fundamental rights of every American, we owe something to our children and grandchildren. We owe it to them to win,” he said.

Who is Darren Bailey? Get to Know the Presumptive Republican Nominee for Illinois Governor

Bailey, 56, served in the Illinois House for one term before running for state senate in the 55th district, defeating Democrat Cynthia Given in 2020.

It was during that election cycle that Bailey put himself on the state political radar, suing Pritzker’s administration over its stay-at-home order during the COVID pandemic. He ultimately won a temporary restraining order from a judge in Clay County, but later had the TRO overturned on appeal.

Bailey also found himself in hot water after refusing to wear a mask on the floor of the Illinois House, with lawmakers voting to remove him from the chamber.

Runner-up Beverly Miles received only 8% of the vote.

According to the Illinois State Board of Elections, more than $216 million total was spent among eight candidates -- two Democrats, including incumbent Gov. J.B. Pritzker, and six Republicans.

Bailey, one of Pritzker’s fiercest critics, will face off against the incumbent Democratic governor in November’s general election on Nov. 8. If Bailey wins, Illinois will have its third Republican governor in 24 years.