Landlord Comments on Past Citations After Chicago Building Explosion, Collapse

More than 130 emergency personnel responded to the scene and final searches were conducted after a residential building in Chicago partially collapsed following an explosion.

City of Chicago inspection records examined by NBC 5 Investigates and Telemundo Chicago Investiga show the residential building that partially collapsed Tuesday after an explosion "failed" its last 12 Department of Buildings inspections in a row, dating back to 2010, although the cases that resulted from all of those inspections were later dismissed.

The upper floor of the building, located at 5601 W. West End Ave., partially collapsed just after 9 a.m. Tuesday. The cause of the explosion that apparently led to the collapse has not been confirmed.

At least eight people were hospitalized, three of whom were believed to be in critical condition and five of whom were in stable condition, according to fire officials.

More than 130 emergency personnel responded to the scene and final searches were conducted as fire officials said they did not believe there were any additional victims trapped.

The building is owned by West End LLC, and managed by Urban Alternatives.

Online city of Chicago inspection records showed the most recent posted inspection report is from February 2020 -- two-and-a-half years ago -- when the building was cited for six violations, including: washed-out mortar on the building’s south and west sides; failure to properly vent a gas dryer; cracked walkways; bubbling paint in the third-floor interior stairway; debris in the rear courtyard and a note that the department was not allowed entry to most apartments, meaning they could not inspect much of the building.

The Department of Buildings filed an Administrative Hearings case as a result of those violations, but that case was later dismissed. City officials confirmed that a follow-up inspection revealed that all six violations had been corrected. 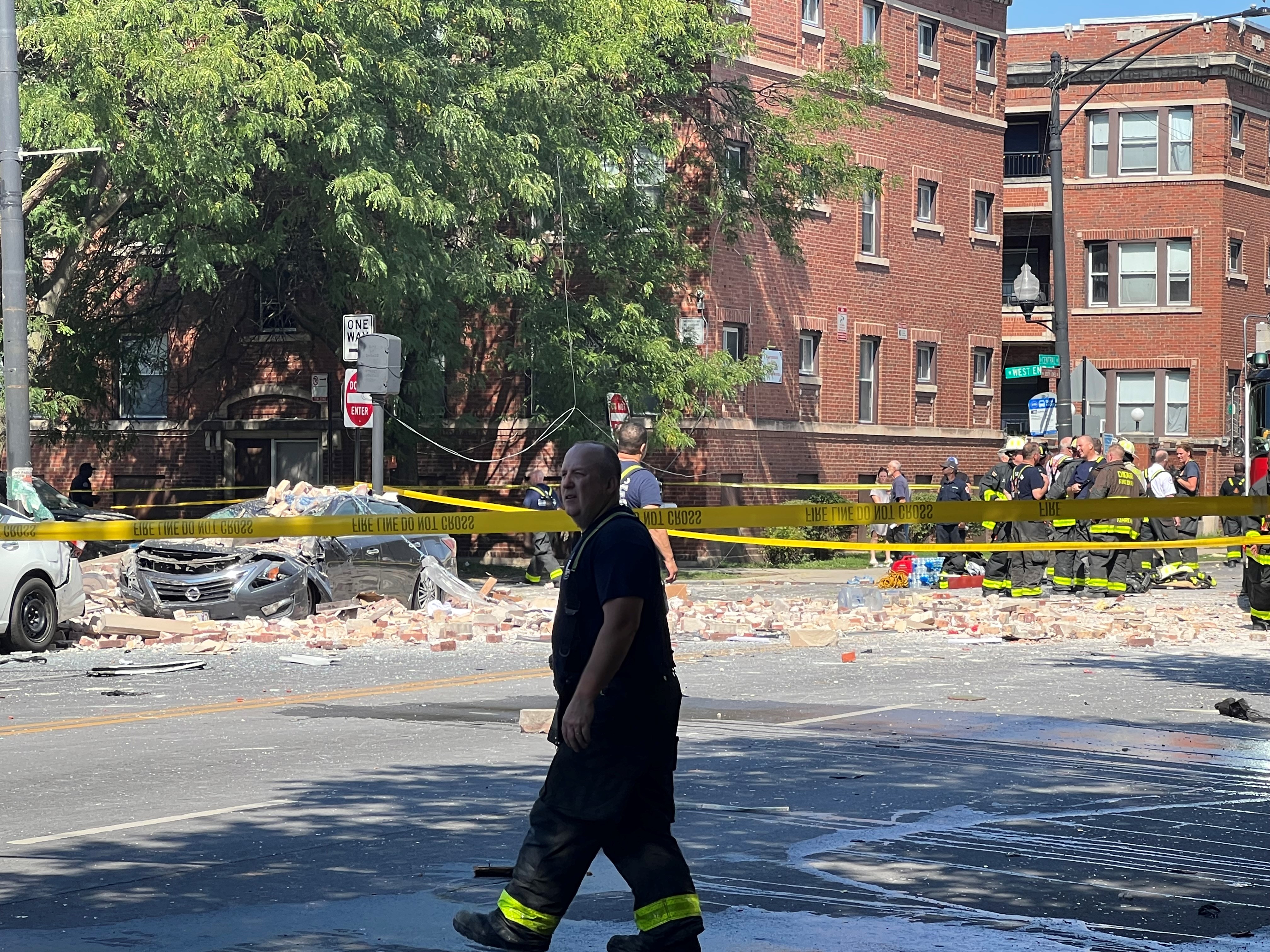 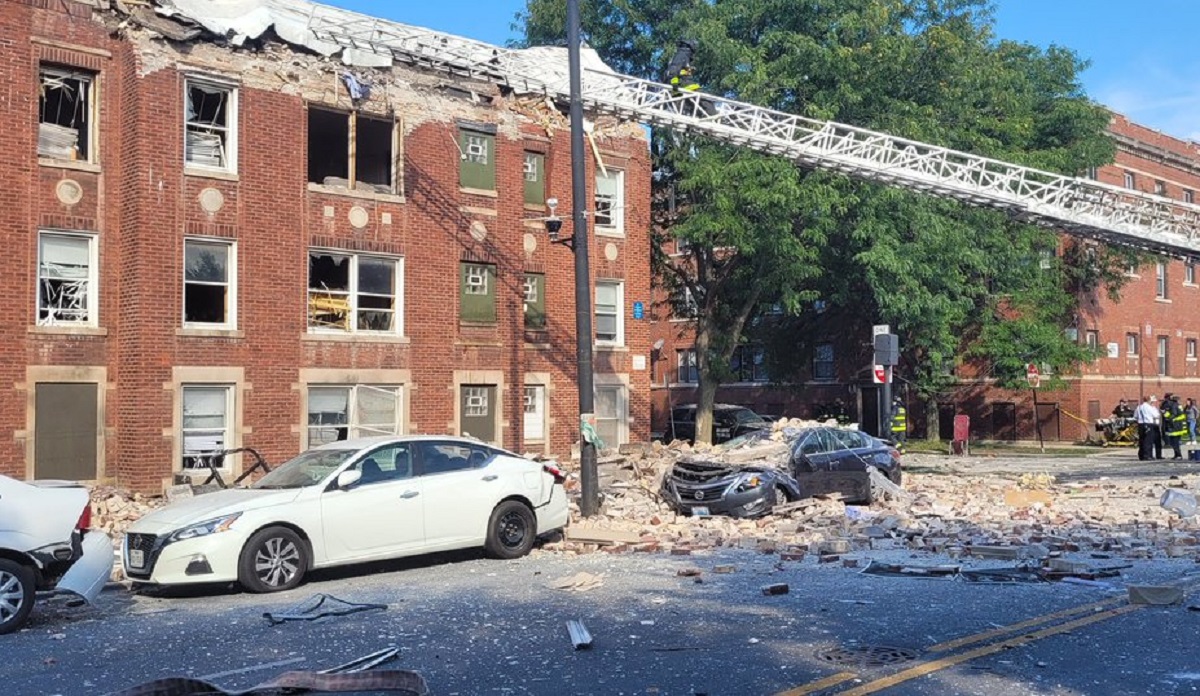 Building Collapses After Nearby Explosion on Chicago's West Side, Several People Injured

This was not the first time the building had been cited for some of these violations, according to the city’s website. NBC 5 Investigates found that in 2017 the Department of Buildings had cited the building for washed out mortar on the west wall, as well as overflowing garbage.

In all, city records show the building “failed” its last 12 DOB inspections in a row, dating back to 2010. But records show – and Viere confirms – that the administrative cases that resulted from these citations were all later dismissed.

Despite these repeated violations, city records show the last permit taken out by the building owners is from 2008 – 14 years ago – when the owners said they needed to repair masonry and plaster from another near-identical violation back then.

The Department of Buildings noted that it has not received any recent inspection requests or calls for service from the location, however, and "none of the violations would have contributed to an explosion or structural failure at the building."

“The Department of Buildings (DOB) takes public safety and quality of life issues very seriously," the department said in a statement. "Our thoughts and prayers are with the individuals and families that were affected by today's explosion and partial building collapse at 160-164 N. Central Avenue/5601-5613 W. West End Avenue. DOB will cooperate with our City agencies ​as they work to complete their investigation of this incident.”

Fire officials said the cause of Tuesday's explosion was not immediately known but an investigation remained ongoing. Peoples Gas and ComEd confirmed both companies were responding to the scene, but it was unclear if gas was involved.

Viere said his office had inspected the building at the center of the explosion just one week prior.

"We do, on a regular basis, inspect all of our apartments and last week Tuesday we inspected this particular building," he told NBC 5. "All smoke detectors confirmed working, except one to two units we are not allowed to go into because of residents. But the apartments we did go into were all either we changed batteries or replaced defective units."

A building collapsed Tuesday morning on Chicago’s West Side after a nearby explosion, and fire officials requested a mass casualty ambulance-bus to assist after multiple injuries were confirmed and a search continued for people who may still be inside the building.

An unknown number of residents were displaced by the explosion and adjacent buildings were evacuated.

"A big boom, doors opening, windows shattering - it was crazy, man," Ronald Martin, a resident who has lived in the building for several years, told NBC 5. "I was cooking breakfast, just a usual morning, was getting myself ready for work and it just stopped automatically."

Viere told NBC 5 he was working to find alternate housing for displaced residents, including a hotel, a church and some vacant apartments.

"We’ve provided housing in the community for over 30 years. We take this stuff very seriously," Viere told NBC 5. "That’s why we inspect units twice a year, we do maintain our apartments - these are these people’s homes. They deserve to have good, safe, clean housing. It’s devastating for everybody involved. I can’t imagine anybody would want something like this to happen. We are trying to help those affected. I feel we run good safe, properties and we try and take that responsibly very seriously."

Chicago Mayor Lori Lightfoot tweeted her thoughts were with the injured and the firefighters working the scene.

"My thoughts are with those who were injured and displaced in the building collapse in the Austin neighborhood. We must also thank the brave men and women of the Chicago Fire Department who are working to abate the dangerous conditions," she wrote.