What time the winter storm warning begins and how much snow you could see depends on where you live.

A large swath of the Chicago area will be under a winter storm warning Saturday as several inches of snow are expected to fall on the first day of the new year.

But what time the warning begins, and how much snow you could see, depends on where you live.

Here's a breakdown of what to expect and when, from NBC 5's Storm Team.

A warning begins at 9 a.m. in McHenry, DeKalb, Kane, LaSalle, Kendall, Grundy and Will counties in Illinois.

The heaviest snow is expected to fall between 2 and 8 p.m.

In Kankakee County, a winter weather advisory also begins at 9 a.m., warning of anywhere from 2 to 5 inches of snow. The advisory remains in effect until 3 a.m. Sunday.

The heaviest snow rates are expected between 3 p.m. and 11 p.m.

What to Know Across the Area 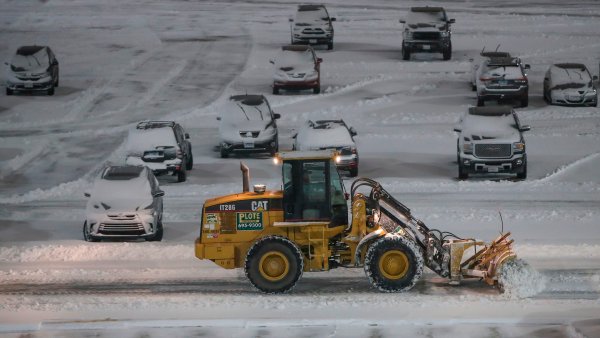 The Illinois Department of Transportation expects the winter storm will "create hazardous conditions across the state," including extremely slick conditions and poor visibility.

"IDOT crews will be out on the roads but conditions could still be extremely hazardous, so we encourage motorists to ask themselves if they really need to make the trip," said Illinois Transportation Secretary Omer Osman in a statement. "If you do have to travel, remember that the bitter cold and wind reduces the effectiveness of the materials we use to treat snow and ice. There will be lengthy travel times so make sure to prepare your vehicle in the event you are stranded."

Forecasters say that steady, blowing snow will be the primary threat from the storm, causing dangerous travel conditions throughout the area.

Snow accumulations will vary widely depending on the track of the storm, but forecasters say that accumulations between four and six inches are possible, along with northeasterly winds gusting in excess of 35 miles per hour.

IDOT said more than 1,800 trucks and equipment will be deployed statewide to treat roads and respond to weather emergencies. Drivers are asked to slow down and increase driving distance if you encounter a plow or maintenance vehicle.

If you must travel, IDOT recommends:

• Take it slow, especially when approaching intersections, ramps, bridges and shaded areas that are prone to icing.
• Make sure your gas tank is full.
• Keep a cell phone, warm clothes, blankets, food, water, a first-aid kit, washer fluid and an ice scraper in your vehicle.
• Check the forecast and make sure someone is aware of your route and schedule.
• Carry a cellphone and dial *999 in the Chicago area for assistance in case of emergency.
• Reminder: Using handheld phones while driving is illegal in Illinois, unless it is an emergency situation.
• If you are involved in a crash or break down, remain inside your vehicle, which is your safest form of shelter. Exiting your vehicle into live traffic can have fatal consequences.
• Always wear a seat belt, whether you’re sitting in the front seat or back seat. It’s the law.