5 Candidates for Illinois' US Senate Seat Square Off in Forum on NBC 5, Telemundo Chicago

The five candidates for U.S. Senate from Illinois squared off for the first time in a forum that was streamed on NBC 5 and Telemundo Chicago's digital platforms Friday evening. The forum is scheduled to air on both TV stations on Sunday.

The virtual forum includes all five candidates for the Senate seat on the ballot in the 2020 general election. They include, in order of their appearance on the ballot: incumbent Democrat Sen. Dick Durbin, Republican Mark Curran, Willie Wilson, running under the Willie Wilson Party, Green Party candidate David Black and Libertarian Danny Malouf.

Durbin is an attorney who's seeking a fifth term in the office he first won in 1996. Curran is an attorney who served as Lake County Sheriff from 2006 – when he was elected as a Democrat, before switching parties in 2008 – through 2018. Wilson is a businessman who previously ran for Chicago mayor in 2015, president in 2016 and then Chicago mayor again in 2019. Black is a retired attorney who previously ran for Illinois attorney general and Malouf is a human resources manager. 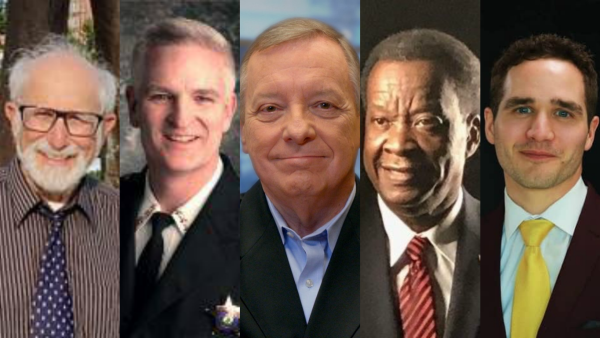 The event will be broadcast on both stations on Sunday, airing on NBC 5 at 10:30 a.m. and in Spanish on Telemundo Chicago at 1:30 p.m.

“This election is extremely important for our country and our state,” said Frank Whittaker, NBC 5 station manager and vice president of news. “We are delighted that all five candidates for U.S. Senate from Illinois are able to join us for our forum.  NBC Chicago and Telemundo Chicago are dedicated to keeping voters informed on the key issues facing our country. There is no better team to lead this discussion than Carol Marin, Mary Ann Ahern and Karla Leal.”