Along with releasing video of the fatal police shooting of Adam Toledo, the city of Chicago also made public on Thursday reports identifying the officer who shot the 13-year-old boy as Eric Stillman.

The Civilian Office of Police Accountability - Chicago's police oversight agency investigating the shooting - released body camera videos and other related materials two days after Adam's family was shown the footage and 17 days after the shooting itself, which took place in the early morning hours of March 29.

The Chicago Police Department's case incident report and tactical response report were both included in the materials made public, identifying the officer as 34-year-old Eric Stillman, an officer since August 2015, assigned to the 10th District.

An attorney for Stillman said in a statement Thursday that the officer "was faced with a life threatening and deadly force situation" in which he was "left with no other option."

Stillman's body camera video shows him driving to the scene in the Little Village neighborhood in response to an alert of shots fired, then exiting his vehicle and running down an alley as he yelled at Adam to stop and put his hands up.

Adam pauses near a fence at the end of the alley, with a split-second frame of the video appearing to show him toss a gun behind the fence and turn toward Stillman with his hands up.

A surveillance video from across the parking lot, though recorded from a distance, also shows Adam make a tossing motion with his right hand behind the fence before turning to face Stillman, who immediately fired.

Stillman's body camera video shows that he fired one fatal shot nearly instantaneously as Adam turned and raised his hands, the boy illuminated by a flashing light that appeared to show both of his hands at that point were empty.

The video shows that after Adam fell to the ground, the officer moved toward the boy and called for medical assistance, saying "shots fired by the police" as he requested an ambulance and began chest compressions.

Minutes after the shooting, the footage shows another officer shine a flashlight on a gun on the ground behind the fence, several feet from where other officers were attempting to resuscitate Adam. 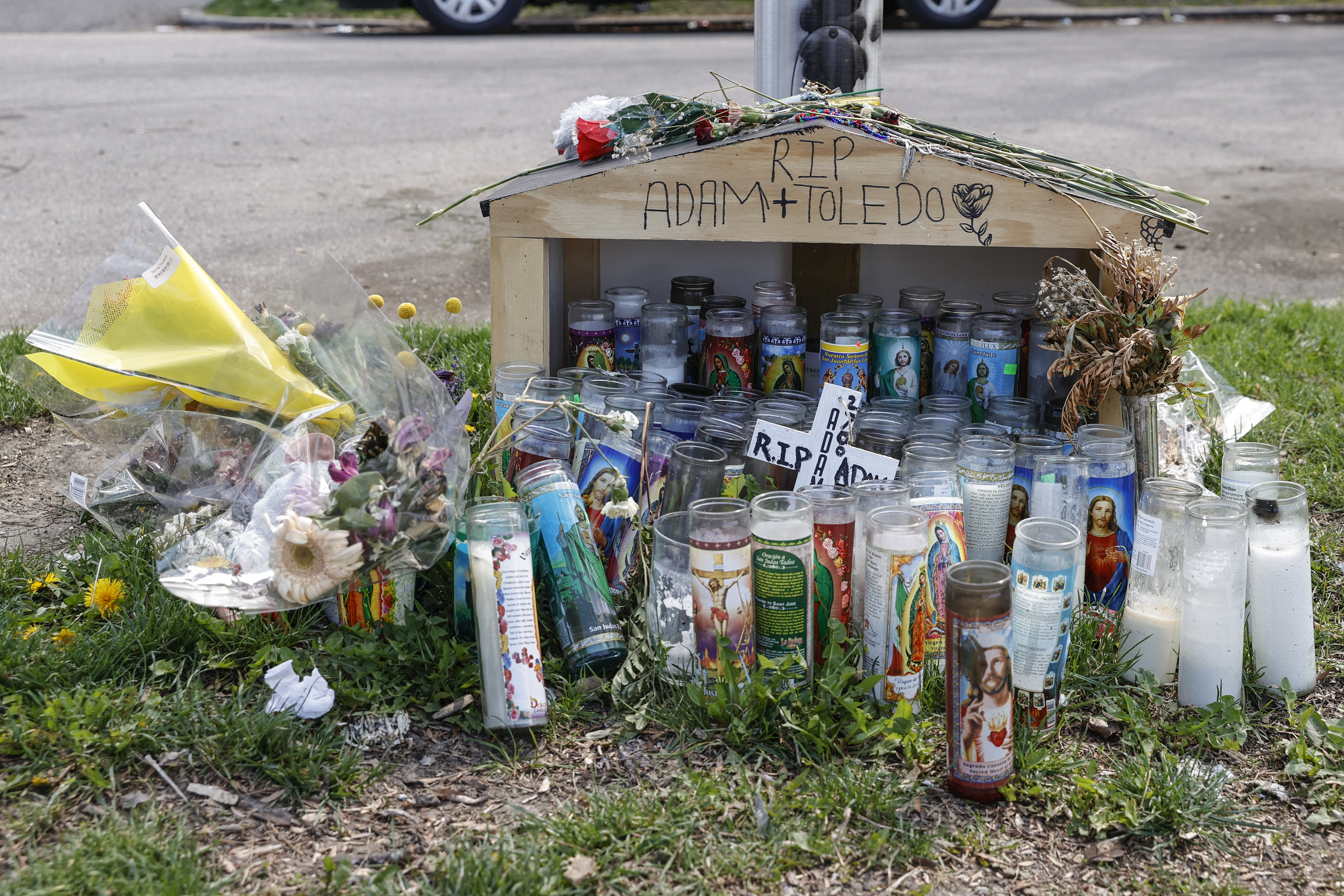 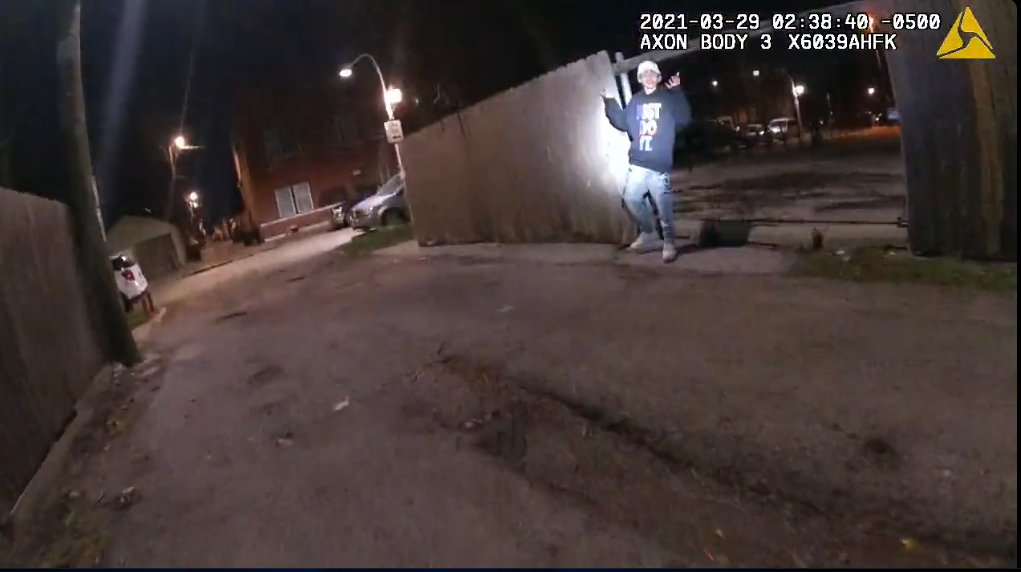 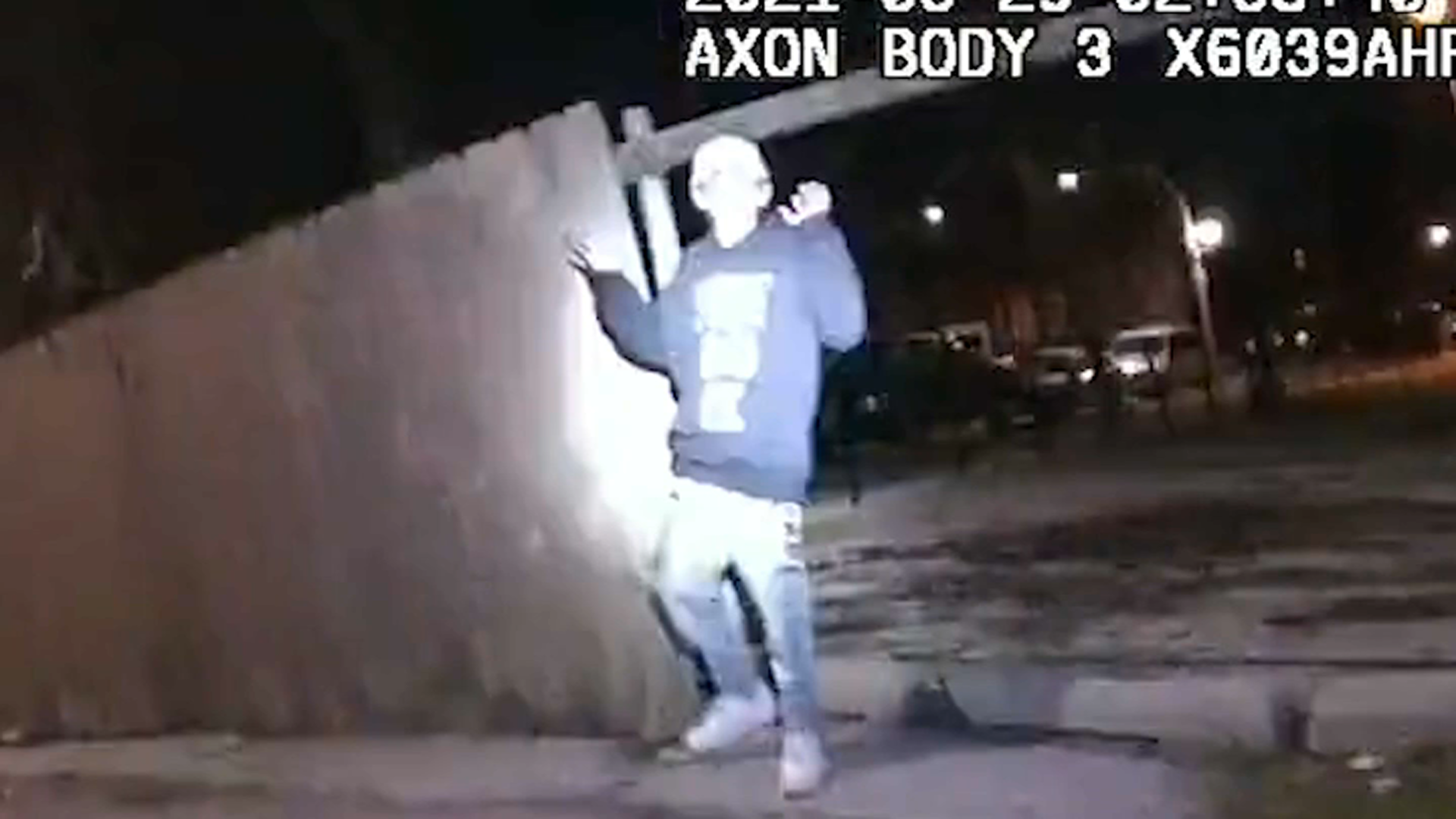 Adam Toledo: What We Know So Far as Chicago Police Shooting Video Released

"At this point the officer was faced with a life threatening and deadly force situation. All prior attempts to deescalate and gain compliance with all of the officers lawful orders had failed," Grace continued. "The officer had no place to take cover or concealment, the gun was being orientate in his direction and he was left with no other option."

An attorney for Adam's family said Thursday that the video showed boy did not have a gun in his hand at the moment Stillman fatally shot him.

Required by law to publicly release body camera footage no more than 60 days after a police shooting, COPA released the materials 17 days after the shooting took place on March 29.

At the time, police said officers responded to an alert of shots fired at 2:37 a.m. in the 2300 block of South Sawyer and saw two males in a nearby alley. Police said at the time, and the newly released video shows, that both fled as the officers chased them and Stillman opened fire. Adam was pronounced dead at the scene.

The 21-year-old man who authorities say was with Adam at the time of the shooting was charged with multiple felonies in connection with the incident.

Stillman has been placed on administrative duties for 30 days in accordance with CPD policy as COPA investigates the shooting.

COPA noted Thursday that it is "committed to completing a full, thorough and objective investigation of the entire incident which includes not only the officer’s use of deadly force but also the actions of other involved officers leading up to and following the deadly shooting to determine whether each officers’ actions complied with Department policy directives and training."

COPA's recommendation on any potential disciplinary actions for Stillman will be sent to Chicago Police Supt. David Brown, who will then have 90 days to review the agency's findings.

"If I agree to what COPA has recommended, that recommendation is sent to the city's Department of Law to prepare charges for suspension or separation which are then filed before the Police Board," Brown said at a news conference earlier this month, adding that if he disagrees COPA's recommendation, the decision then "goes before a one-person panel of the Police Board for determination and possible referral to the entire Police Board."