A broken surfboard did not shake Brazilian surfer Italo Ferreira's confidence in the finals of the first-ever Olympic surfing gold medal match.

Ferreira won in the finals against Kanoa Igarashi of Japan, despite crashing off an air to land on a broken board.

The incident occurred in the opening minutes of the last day of competition at the sport’s historic debut and required a quick board switch near the beginning of the heat.

But it didn't seem to rattle the Brazilian who had so little growing up that he learned to surf on a cooler.

By the time the clock ran out, Ferreira turned to the ocean, collapsed his hands together in a prayer and wept, nearly knocked over by his emotions and the waves crashing onto shore. He was carried out of the water by his team.

In an interview with Brazil's Globo-TV news after the competition, Ferreira wept as he talked about wishing his grandmother was alive to see him win. The reporter appeared equally emotional.

"I wish she was alive to see this, to see what I was able to make of myself and for my parents and community," he said. "I don't have words to describe this. It's something I wished for a lot and dreamt about...and now my name is written in the history of the sport of surfing." 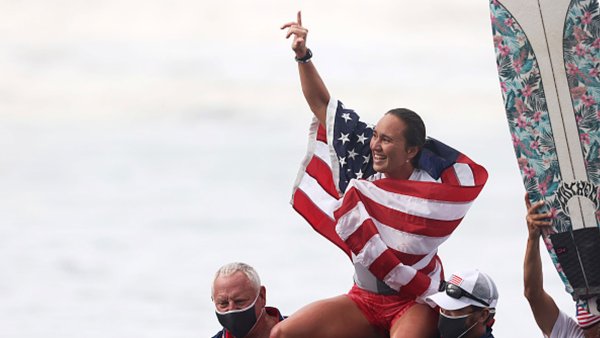 Igarashi, the hometown hero who surfed a career best earlier in the day, won silver.