Chicago, IL (Sports Network) - Russell Martin's three-run double highlighted a five-run second inning when the Cubs committed a pair of errors, and Manny Ramirez homered for a second straight night, carrying the Los Angeles Dodgers to a 10-3 win and a commanding lead in their National League Division Series.

Ramirez drove in two runs and Rafael Furcal went 3-for-6 with two RBI and a pair of runs scored for the Dodgers, who won 7-2 Wednesday night and can sweep the best-of-five series with a victory Saturday in Los Angeles.

"It feels great," said Ramirez. "It takes a lot of pressure off our team. We've got to continue to come out every day. They're the best team in the National League and I've got a lot of respect for them. We need one more game."

Chad Billingsley (1-0), making his first career playoff start, had seven strikeouts over 6 2/3 effective innings, as he was charged with five hits and a run. 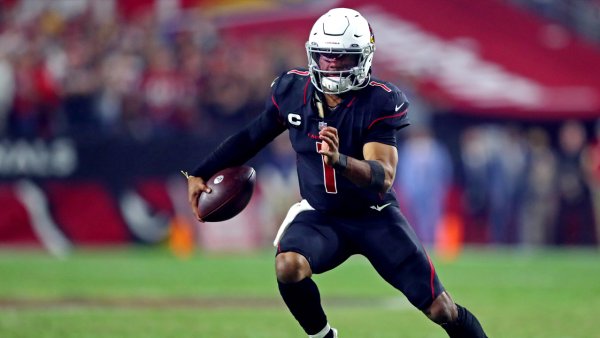 Cardinals Will Reportedly Have Kyler Murray, DeAndre Hopkins Back vs. Bears

It was another case of postseason futility for the Cubs, who committed four errors on the way to their eighth consecutive playoff loss since their infamous collapse during the 2003 NLCS against the Florida Marlins.

Possibly left without another home game in this postseason, the Wrigley Field faithful voiced their displeasure with the Cubs in the middle innings, and the team is now one loss away from being eliminated, 100 years since their last World Series championship.

Carlos Zambrano (0-1) was touched for six hits and seven runs, but just three of those were earned, in 6 1/3 innings. He also had seven strikeouts against two walks.

"I don't think you can win 97 ball games playing that way," said Cubs manager Lou Piniella. "It wasn't good baseball. In fact, the last two days, they've probably been the two worst games we've played all year from a walking and errors standpoint. It wasn't fun to watch, I can tell you that."

On the other side, the Dodgers are one victory away from their first postseason series triumph since 1988 when they beat Oakland to win the World Series. They came into this series with just one win in their previous 13 playoff games.

The only team to rally from a 2-0 deficit to win a division series was the New York Yankees against Oakland in 2001. Current Dodgers manager Joe Torre was at the helm of the Yankees then.

Andre Ethier and James Loney singled to start the second inning, putting runners at the corners. Matt Kemp struck out, but second baseman Mark DeRosa then made a critical error, botching a potential double-play grounder. Blake DeWitt was safe on the play, driving in Ethier. On the next play, first baseman Derrek Lee fumbled Casey Blake's chopper, leaving the bases loaded.

Billingsley fanned, but Furcal bunted for a base hit for an RBI. DeRosa charged to get the ball, but his throw was late to first base. Martin then smacked a line double to left-center, prompting groans from the home crowd.

"Well, that was huge for us," said Torre. "You get in the postseason, you're playing good teams. Even during the course of the season, when you're not playing this caliber of team, you still don't like to give extra outs. When you give extra outs, chances are they're going to be capitalized on, and that's what we were able to do tonight."

Ramirez tattooed an 0-1 offering over the wall in center field to start the fifth inning, and Kemp's RBI double off Neal Cotts down the right field line in the seventh plated Ramirez for a 7-0 cushion.

Back-to-back doubles from DeRosa and Jim Edmonds in the bottom of the inning got the Cubs on the scoreboard, but they wasted a first-and-third opportunity when Kosuke Fukudome grounded into a force play to end the frame.

The Dodgers padded their lead to 9-1 in the eighth. Furcal singled in Casey Blake, and later Edmonds failed to make a diving catch in center field on a ball hit by Ramirez. That knocked in Furcal.

Pinch-hitter Juan Pierre reached base on a throwing error by shortstop Ryan Theriot in the ninth, and then scored on a Blake base hit.

DeRosa, who had a two-run homer Wednesday, stroked a two-run double with nobody out in the ninth inning. Jonathan Broxton finished up, retiring three straight batters after walking pinch-hitter Felix Pie.

After the game, Piniella said he was fed up with the questions from the media regarding Fukudome, who is hitless in eight at-bats.

"From now on I don't want to hear about Fukudome anymore as far as whether he's going to play or not," said the Cubs skipper. "I'm going to play (Mike) Fontenot or Reed Johnson or somebody else and that's the end of that story. The kid is struggling, and there's no sense sending him out there anymore."