Eloy Jiménez, Yasmani Grandal and Brian Goodwin also connected for the White Sox, who went 5-1 against the Cubs this year. Robert, Jiménez and Goodwin each drove in three runs.

White Sox slugger José Abreu hit a two-run double in a seven-run fifth to get to 101 RBIs with 29 games left. The reigning AL MVP drove in a career-high 123 runs in 2019.

“He’s one of the elite run producers in the history of the game,” White Sox manager Tony La Russa said. 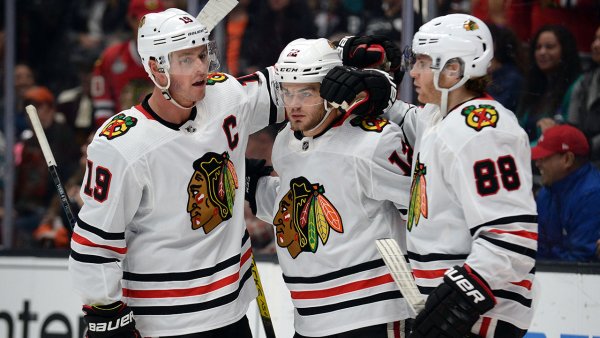 Blackhawks Talk Podcast: Jonathan Toews Is Back and Other Takeaways From Day 1 of Camp

Jiménez and Cease, who were acquired from the Cubs as part of a five-player trade for left-hander Jose Quintana on July 13, 2017, continued to haunt their former organization.

After Abreu’s two-out double over the head of Rafael Ortega in center field, Jiménez chased Kyle Hendricks (14-6) with a three-run homer to right that lifted the White Sox to an 8-1 lead.

Cease is 2-0 with 21 strikeouts in his last two starts against the Cubs.

“I feel my velocity lately has been picking up,” Cease said.

Meanwhile, Hendricks is 1-3 with a 6.75 ERA in five career road starts against the White Sox. Hendricks allowed a career-high nine runs against Milwaukee on Aug. 12.

Frank Schwindel homered for the Cubs in the fourth. He has hit safely in 21 of 26 games since joining the team on July 30.

Cubs first baseman Alfonso Rivas made his major league debut, hitting a single and double in his first two at-bats.

“I thought he managed the plate very well,” Cubs manager David Ross said. “It was a nice piece of hitting.”

The Cubs advanced only three runners as far as second base against Cease and three relievers.

Robert is batting .382 with five homers in 15 games since returning from the injured list Aug. 9.

"My swing is the same,” said Robert, who missed 85 games because of a right hip flexor. “I haven’t been over swinging.”

Goodwin hit an opposite-field drive to left for a two-run homer in the second. Grandal went deep in the fifth, connecting for his third homer in as many games since returning from the IL Friday.

The Sox scored 30 runs in the three-game series despite getting blanked Saturday by Alec Mills and Codi Heuer.

Rivas and reliever Scott Effross became the 62nd and 63rd players employed by the Cubs this season and the 37th and 38th players to make their Cubs debut — both extending franchise records. Twelve players have made their major league debuts with the Cubs, one shy of the franchise record set in 2012.

Cubs: SS Sergio Alcántara left in the bottom of the fifth because of a right ankle bruise.

White Sox: SS Tim Anderson didn’t start because of recurring soreness in his legs. Anderson missed four consecutive games from Aug. 21-24 because of leg discomfort. “They’re barking,” La Russa said. ... 3B Yoán Moncada also didn’t start despite his 14-game hitting streak. Moncada has coped with a sore right shoulder, but La Russa thought it was wise to take advantage of upcoming days off on Monday, Thursday and Sept. 6.