Here a list of key takeaways from the Nevada caucuses

Sen. Bernie Sanders cruised to victory in the Nevada caucuses, heartening his supporters and stoking alarm among moderates who fear he is too liberal and would lose to President Donald Trump.

Takeaways from the Nevada caucuses: 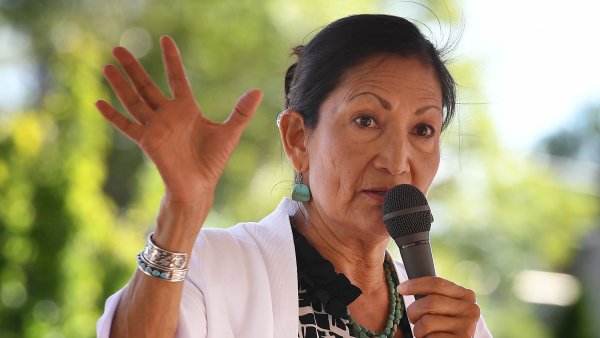 US Official to Address Legacy of Indigenous Boarding Schools

Sanders' convincing win means there is no longer an asterisk next to his status as the front-runner in the race. He proved his strength with a broad coalition that included Latino voters, union members and African Americans.

Now Sanders claims three victories in a row heading into South Carolina next Saturday, and more important, Super Tuesday on March 3 when about one-third of the delegates needed for the nomination are at stake. The biggest prizes that day, California and Texas, look a lot like Nevada demographically.

Another advantage: His opponents remain splintered and, with the exception of billionaire former New York Mayor Mike Bloomberg, under-funded to compete across such a vast terrain.

But now there will be extraordinary pressure to try to consolidate moderate support in an effort to stop Sanders' rise. And Sen. Elizabeth Warren will have a decision to make on how much she tries to draw separation from Sanders since they are both competing for the progressive vote.

There is at least one strong note of caution about Sanders' success. In Iowa and New Hampshire he didn't seem to grow the electorate substantially. Data is still out in Nevada.

Here is what Pete Buttigieg talked about at the NBC News/MSNBC Democratic debate in Las Vegas on Feb. 19, 2020.

Former South Bend, Indiana, Mayor Pete Buttigieg ran well behind Sanders, but he tried to cast himself as the strongest alternative to Sanders.

In language uncharacteristically blunt, Buttigieg issued a warning to Democrats about the perils of nominating Sanders, whom he characterized as inflexible and whose ideas are not in the American mainstream.

“Sen. Sanders believes in an inflexible, ideological revolution that leaves out most Democrats, not to mention most Americans,” Buttigieg told supporters. He held himself out as the only viable alternative. “We can prioritize either ideological purity or inclusive victory,” Buttigieg said.

He added: “Sen. Sanders sees capitalism as the root of all evil. He’d go beyond reform and reorder the economy in ways most Democrats — let alone most Americans — don’t support.”

Despite his forceful argument, there’s a serious risk to Buttigieg in the upcoming calendar. He will have to win over black voters in South Carolina, then pivot to a multistate primary with comparatively limited resources. Buttigieg put out a plea for $13 million from donors before Super Tuesday.

The former mayor of a city of 100,000 has repeatedly defied the odds in the presidential nominating contests, but the odds are getting longer.

BIDEN HAS HIS BACK AGAINST A FIREWALL

Here is what Joe Biden talked about at the NBC News/MSNBC Democratic debate in Las Vegas on Feb. 19, 2020.

Former Vice President Joe Biden was hoping Nevada would turn things around for him after a disastrous showing in Iowa and then New Hampshire. He argued that he'd do better in a more diverse state.

But Biden again lost badly even as he told supporters at a union hall, “We’re alive and coming back and we’re gonna win.”

His last and best hope may be to win in South Carolina next Saturday. He’s counting on his support among the state’s black voters — they could make up two-thirds of the voters — to serve as his firewall.

If Biden doesn't win South Carolina, the rationale for his candidacy will much harder to maintain.

In Las Vegas, he tried out a new rallying cry: "I ain't a socialist. I ain't a plutocrat. I'm a Democrat. And I'm proud of it." Party loyalty may be all Biden has left.

MAYBE CULINARY ISN'T ALL-POWERFUL AFTER ALL

The 60,000-member Culinary Workers Local 226 represents workers in the casinos on the Las Vegas strip, and it’s routinely described, correctly, as the most powerful force in the state’s Democratic politics. But it’s not omnipotent.

Culinary didn’t want Sanders to win. It has strongly opposed his “Medicare for All” plan, warning its members that it would eliminate their own generous health plan. Some observers thought the union might end up backing Biden. But after the former vice president’s embarrassing performances in Iowa and New Hampshire, Culinary instead stayed neutral.

The calls from leadership went unheeded by many. Sanders had strong showings in some caucuses in casinos where crowds of Culinary members chanted the Vermont senator’s name and powered him to wins in most casinos. Culinary is driven by its members, many of whom are Sanders supporters, and there was no consensus among the rest about what they should do.

Leadership decided to refrain from a divisive fight, helping pave the way for Sanders’ win. It’s a reminder that even in places like Nevada with strong political institutions, those institutions ultimately derive their power from voters.

NO BOUNCE FOR KLOBUCHAR

Here is what Amy Klobuchar talked about at the NBC News/MSNBC Democratic debate in Las Vegas on Feb. 19, 2020.

Sen. Amy Klobuchar produced one of the few surprises of the race when she surged to a third-place finish in New Hampshire, announced that she had raised more than $12 million, and vowed to prove her doubters wrong.

Her momentum proved short-lived. She finished well behind the leading candidates, and in the process, prompted questions about her viability.

But in a speech to supporters in her home state of Minnesota, she was defiant and said she would continue. She even tried to make a virtue of the fact that Trump mentioned her name at a rally. “By the way, for the first time ever, he mentioned me at a rally,” she said. “You know I’ve arrived now. You know they must be worried.”

Probably not. Time is running out for candidates who haven't finished higher than third in any contest. That also applies to Warren, also desperately needs a win. Her strong debate performance came after much of the state had already cast early votes.

NOT A GREAT RETURN ON INVESTMENT

After Tuesday’s Democratic presidential debate, candidate Tom Steyer commented that climate change, his campaign’s number one priority, was left entirely out of the debate. “The impeachment discussion was worth it, but I’ll tell you what broke my heart, was no asked a question about climate,” he said.

Tom Steyer, the billionaire who made his fortune running a hedge fund, bet heavily in Nevada, more than $12 million on advertising, and lost big, finishing sixth. Steyer has made strong appeals to minority voters, but in Nevada, failed decisively.

But Steyer's impact on the race could come next week in South Carolina, where he has spent even more money. Polls show that he has made significant inroads among African American voters. That would not be good news for Biden, who is counting on those votes to resuscitate his campaign.