Olympians to watch with connections to Illinois, Indiana and other Midwestern states

The Tokyo Olympics begin in July, and athletes from Illinois, Indiana and other Midwestern states have already been slated to compete for Team USA in the Games.

Here's who to watch from the Midwest:

Insight: Shea grew up sailing on Lake Michigan with her family and fell in love with being on the water. She joined Chicago Yacht Club's junior sailing program and competed in high school before taking on the Laser Radial 2008 Olympic Trials her senior year. Shea graduated from Connecticut College in 2011 in Political Science where she was sailing team captain and led the group to national rankings.

Achievements: Shea competed in the Laser Radial 2008 Olympic Trials before attending college. She led her sailing team to a 2nd place finish at ICSA Women's Nationals and a 4th place finish at Women's Singlehanded Nationals. In 2009, she was recognized as an All-American Honorable mention and NEISA Sportswoman of the Year in 2011.

Insight: Mensah-Stock narrowly missed punching her ticket to the 2016 Rio Games despite winning the Olympic Trials. She still traveled with the team to work as a practice partner, but now she'll be traveling as an Olympian.

Achievements: Mensah-Stock is the reigning women’s world champion in the 68-kilogram category. She captured gold in the 2019 Pan-American Games and became a Final X champion in both 2018 and 2019. She is also a three-time Senior World Team member and a 2018 Senior World bronze medalist.

Insight: 21-year-old Owen has seven world championships under her belt going into the Tokyo Olympics. In high school, she was sidelined from her first passion, basketball, with an ACL injury. While recovering from surgery, Owen turned to cycling and found a new love. When Owen is not racing, she enjoys her cats and listening to Michael Jackson from her pink couch, according to her website.

Achievements: Owen was the first American woman to receive the individual gold medals at the 2015 UCI Juniors Road World Championships in the under 18 category. She and the USA Cycling Team won the team pursuit at the World Championship in March 2016, becoming the first in USA Cycling history. In Rio, her team earned silver medals, as well. Owen also won gold medals at the 2017 UCI Track World Championships. In 2018, she set a world record time in the qualifying round of the 3000 individual pursuit, then broke her own record that same evening.

Insight: Roberts began riding at the age of 9, according to Team USA, in the footsteps of her cousin, who was a professional BMX rider. After recovering from a fractured vertebra, she entered her first competition in 2012. The 19-year-old enjoys traveling, filming, editing and meeting new people.

Achievements: In her two years participating in the world championships, she won a gold medal in 2017 and a bronze medal in 2018 -- both for the freestyle category. In 2018, she placed 2nd in the World Cup overall rankings for freestyle.

Insight: As the most decorated fencer in U.S. history, 35-year-old Zangunis qualified for her fifth Olympic team in 2020, and for the first time as a new mother, according to NBC Sports. She began fencing at the age of 10, with the Olympics being commonplace in her household as both parents competed on the 1976 U.S. Olympic Team for rowing. According to Team USA, she also enjoys cooking, running, hiking, gardening, volunteering and playing tennis.

Achievements: Throughout her two-season collegiate career, she brought the University of Notre Dame two NCAA championship titles. Since 2000, Zangunis has competed in 15 World Championships, earning 15 medals. At the age of 19, Zangunis attended her first Olympics in 2004, claiming the first Olympic fencing gold medal for the U.S. in 100 years. She continued to win another gold and two bronze metals at the 2008, 2012 and 2016 Olympic Games.

Insights: Hildebrandt enjoys reading and playing video games. She will now represent her Indiana hometown, which has a population of about 30,000, at the Tokyo Games.

Accomplishments: Hildebrandt captured her spot in Tokyo by virtue of finishing as the runner-up in her weight class at the Pan-American Olympic qualifier. She won the silver medal at the 2018 world championships in Budapest, and captured gold in the Pan-American Games in 2019.

Insights: Miracle attended high school at Culver Academy in Indiana, where she was a state qualifier competing against boys, according to her Team USA bio. She is the only girl ever to reach the IHSAA state finals while in high school, the Indy Star reports.

Accomplishments: Miracle won the US Open championship in 2017 and 2018. She won the silver medal in the 2020 Pan-American Olympic qualification tournament and was the 2019 Final X champion.

Insights: At age 5, Roble began sailing in Wisconsin on Lake Beulah and competing in the Optimist class. At Old Dominion University, she earned two All-American sailing honors and was team captain while receiving a degree in finance. According to her website, Roble was one of the few women competing as a skipper in the open division. She graduated in 2011 and became a professional sailor, serving many roles aboard the boat.

Accomplishments: While competing professionally, Roble has earned a World Championship, five National Championships and podium finishes at World, National and Continental championships. In 2014, she received the US Sailing Rolex Yachtswoman of the Year and was a finalist for the award the following three years. Competing with Shea, originally from Illinois, the two finished 5th at the 2018 European Championships, 3rd at the World Cup Series Genoa and 3rd at the 2020 49er World Championship.

Insights: Bernau started her shooting experience at the age of 12, where she began shooting American trap at a local 4-H club, according to USA Shooting. Within a few years, she was shooting American trap, skeet and sporting clays for her local high school team. In 2014, Bernau attended a development camp at the Olympic training center for athletes interested in the Games. She began competing with USA Shooting in the summer of 2016 at the Junior Olympic Championships. Besides shooting, Bernau graduated with a Bachelor of Science degree in biology. She enjoys traveling and outdoor activities.

Accomplishments: In 2017, Bernau competed in the Spring Selection Match in Georgia and earned her first official spot on the team in 2018. Once on USA Shooting, she attended the World Championships in Changwon, Korea. She also earned a spot on the Junior National Team at the National Junior Olympic Championships. Bernau shot for the National Elite Team the following year, as well as attended her first World Cup. During the 2020 Spring Selection Match, she placed 2nd overall for women.

Insights: Chidester graduated from the University of Michigan's School of Kinesiology in 2012 with a degree in physical education, according to the school. Her brother also played collegiate baseball and football. For Team USA, she wears No. 19 and is a catcher.

Accomplishments: Since high school in Michigan, Chidester has earned an array of awards for her performance in the softball field. In 2008, she was named Detroit Catholic League Female Athlete and selected to the EA Sports All-American first team for the second year in a row. At the University of Michigan, she was captain her senior year and won Big Ten Player of the Year. Her team won two NFCA All-America titles, as well as All-Big Ten Conference third team. Chidester was a two-time World Championship silver-medalist, prior to winning the gold in 2016. She's won both the gold and silver medals at the Pan American Games and the World Cup of Softball.

Insights: Sancho's love of combative sports started when he began judo at the age of six, according to his bio on the U.S. Army's World Class Athlete Program. His wrestling career began at age 15, but Greco-Roman ultimately became his favorite “because I could throw people on their heads," the bio states.

Accomplishments: Sancho secured his spot in the Olympics by defeating former Olympian Ellis Coleman in the Olympic Trials earlier this year. He is part of the U.S. Army’s World Class Athlete Program and is also a three-time U.S. National Team member.

Insights: Condie began her climbing career at 11 years old at Vertical Endeavors gym in St. Paul, Minnesota. After starting the sport, Condie was diagnosed with severe idiopathic scoliosis, according to her website. In 2010, she had a spinal fusion surgery to fix the curvature in her back. After recovering, she won her first major competition. While not climbing, Condie can be found on the Board of Directors of USA Climbing, watching Netflix, doing puzzles and studying. She aims to attend veterinary school one day.

Insights: Gable is named after Iowa wrestling legend and Olympic gold medalist Dan Gable. He is known for his signature handspring and backflip following a victory, which the crowd begged for after his Olympic Trials victory. 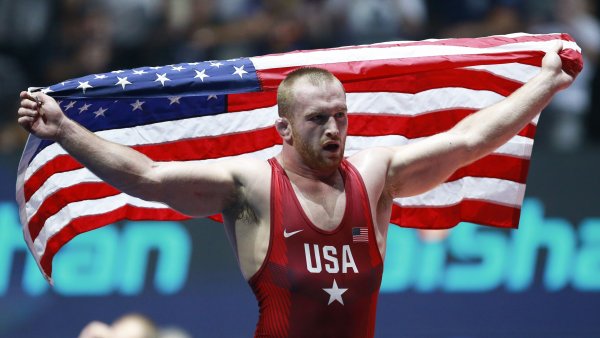 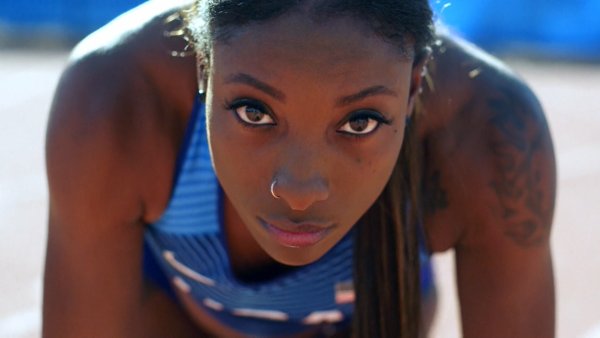 Insights: Attending her third Olympics in 2021, Kiefer is the most decorated women's foil fencer in U.S. history, according to the Team USA website. At the age of 17, she won individual bronze at the 2011 Senior World Championships. After wining four NCAA Championships for the University of Notre Dame, she transferred to the University of Kentucky Medical School in 2017. In 2019, she married men's foil fencer Gerek Meinhardt, who was also her teammate at the 2012 and 2016 Olympics, as well as at Notre Dame. Kiefer's siblings and father were also award-winning fencers.

Midwest Connection: From Council Bluffs, Iowa and attends the University of Iowa

Insights: Gilman is an avid reader and even shares his top book recommendations on his blog, many of which are centered on historic events - no surprise coming from a history major. He will turn 27 just before the Tokyo Games.

Accomplishments: Gilman, a three-time All American at Iowa, won the Pan-American Olympic Qualifier last year and also captured the top spot in the US Olympic Trials ahead of the Tokyo Games. He is a 2017 World silver medalist and 2017 Big Ten champion.

Insights: Snyder is the youngest Olympic Gold medalist and the youngest World Champion in American wrestling history. He enjoys cooking shows and often cooks himself breakfast and lunch.

Accomplishments: Snyder was a three-time national champion at Ohio State and qualified for the Olympics by virtue of winning bronze at the 2019 world championships. Snyder is also the defending Olympic gold medalist in the 97-kilogram division. He has since added two world medals to his list winning a silver in 2018 and a bronze the following year.

Insights: Winchester was unable to compete in the Rio Olympic wrestling trials when she tore her knee playing soccer. She didn't start wrestling until about a decade ago, when she was a junior in high school.

Accomplishments: Winchester is the reigning world champion in the 55-kilogram class. She also finished in fifth place in the 2018 world championships in the same classification. She is the first American to earn a medal at the worlds in Kazakhstan.