Thousands of Chicago-area Metra passengers will no longer have their Thursday night train schedules disrupted after all, the train operator said in statement Thursday morning, thanks to a tentative agreement reached between union rail workers and railroad companies.

"We are happy to report that in the overnight hours a tentative agreement was reached between freight railroads and their unions, averting a strike that could have started tonight and halted service on the BNSF and three Union Pacific lines," Metra said in a statement posted to their Facebook page.

"We are greatly relieved that we will be able to continue to provide the safe and reliable service that you deserve and that you rely upon. Please accept our apologies for this week of uncertainty and anxiety, and our thanks for your patience and understanding. The late Thursday evening trains that had been canceled by BNSF and Union Pacific in anticipation of a strike will now run as scheduled"

Metra, who is not part of the labor dispute, had prepared for the potential strike by pre-emptively canceling Thursday evening service across 4 busy commuter lines that travel to and from Chicago and the suburbs.

Earlier in the week, the train operator said that, should a strike take place Friday, the service suspensions would continue.

Amtrak, who is also not part of the dispute, had also canceled service pre-emptively on all long distance trains -- three of which originate out of Chicago.

However, in a statement Thursday morning, Amtrak said it was "quickly working to restore canceled trains and reaching out to impacted customers to accommodate on first available departures."

While the potentially devastating and disruptive freight rail way worker strike set for Friday has been averted —for now — it isn't a done deal yet. 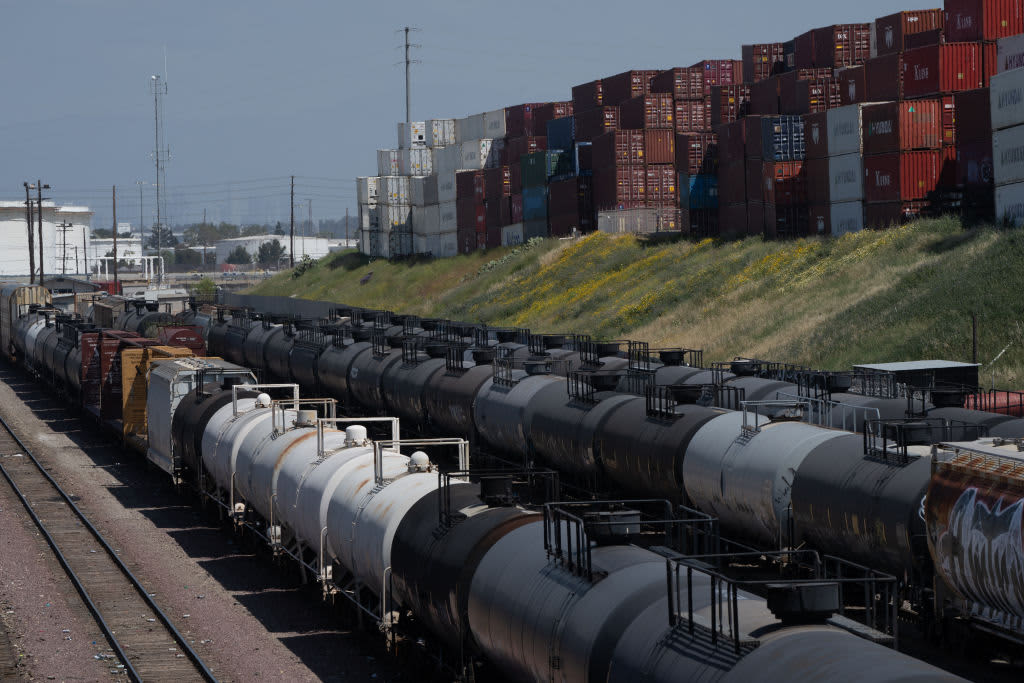 Thursday morning, the White House released a statement about the two parties reaching a tentative agreement, saying it is a "win for our economy and the American people," a statement from President Joe Biden read. "I thank the unions and rail companies for negotiating in good faith and reaching a tentative agreement that will keep our critical rail system working and avoid disruption of our economy."

According to a report from NBC News, freight workers were threatening to strike as early as Friday for reasons including higher pay, more generous paid leave, and a renegotiation of strict attendance policies that makes it difficult to take time off.

A statement from the American Association of Railroads confirmed the tentative agreement, and indicated that new contracts negotiated "provide rail employees a 24 percent wage increase during the five-year period from 2020 through 2024, including an immediate payout on average of $11,000 upon ratification."

According to a report from the Associated Press, railroads and union representatives had been in negotiations for 20 hours Wednesday at the Labor Department to hammer out a deal. Train passengers wouldn't be the only ones impacted by a strike. Due to the volume of products carried and moved by rail, supply chains for various items could be affected.

According to a report from CNBC, about 40% of the nation's long-distance trade is moved by rail. If the unions strike, more than 7,000 trains would be idled.

And the United States Chamber of Commerce says a rail worker strike could further affect economic and supply chain issues by impacting the flow of goods and raise already inflated prices.

"A shutdown of the nation's rail service would have enormous national consequences," the Chamber said on Monday, Reuters reports.

According to Joe Schwieterman, a Transportation Professor at DePaul University, the timing of the threat, which the White House says was averted by the tentative agreement, is especially critical.

"This comes at a really tough time," Schwieterman said in an interview with NBC 5. "Our supply chains are stretched. We have difficult logistic problems. Our highways are really clogged up. You throw in a rail strike it makes things really unpredictable for manufacturers."

"The effects on shipping are tremendous," Schwieterman said. "A lot of stoppage will occur if there is a strike."

Last week, a coalition of 31 agricultural groups sent a letter to Congress, and the Fertilizer Institute trade group joined the chorus of concerned shippers Saturday because shipments of ammonia and other fertilizers will be delayed.

“Supply chains are already strained and there is currently zero elasticity in rail transportation,” FIT group President and CEO Corey Rosenbusch said. “This situation will get exponentially worse every day there is no resolution.” According to Rosenbusch, more than half of all fertilizer is hauled by railroads.

Additionally, more than 75% of all finished vehicles are taken from factories to dealerships by train, and countless other products move by rail.

The Association of American Railroads estimates shutting down the railroads would cost the economy $2 billion dollars a day.

Prior to a new tentative agreement being reached, members of one union rejected a different tentative deal with the largest U.S. freight railroads Wednesday, while two ratified agreements and three others remained at the bargaining table.

About 4,900 members of the International Association of Machinists and Aerospace Workers District 19 voted to reject the tentative agreement negotiated by IAM leadership with the railroads, the union said Wednesday. But the IAM agreed to delay any strike by its members until Sept. 29 to allow more time for negotiations and to allow other unions to vote.

Of the nine that agreed to the deals, two — the Transportation Communications Union and the Brotherhood of Railway Carmen unions — voted to ratify their contracts Wednesday. But IAM members voted to reject their deal. Votes by the other six unions that approved tentative deals are pending.

All the tentative deals are based closely on the recommendations of a Presidential Emergency Board Joe Biden appointed this summer that called for 24% raises and $5,000 in bonuses in a five-year deal that’s retroactive to 2020. Those recommendations also includes one additional paid leave day a year and higher health insurance costs.

Ron Kaminkow, general secretary of the Railroad Workers United labor coalition that includes workers from a variety of railroad unions, said he doesn't think the unions are demanding much at this point — just the kind of things most U.S. workers already enjoy like the ability to take time off without being penalized.

“We have attendance policies that have gotten more and more and more draconian. That offer very, very little leeway for workers who need to take time off for doctor’s appointments, for time with family, to be rested,” Kaminkow said.