A trail of damage marked the path where protesters marched in downtown Chicago Saturday evening, leaving behind broken windows, graffiti and the damaged remains of some of the city's most popular shops.

Flames were seen shooting out of Chicago Sports & Novelty- one of multiple fires set in the city Saturday night.

The city's mayor applauded protesters who remained peaceful but condemned those who "came armed for all-out battle."

The crowd of thousands converged on Chicago's Loop for Saturday's protest march. The demonstration began at 2 p.m. and protesters began marching north about 90 minutes later. 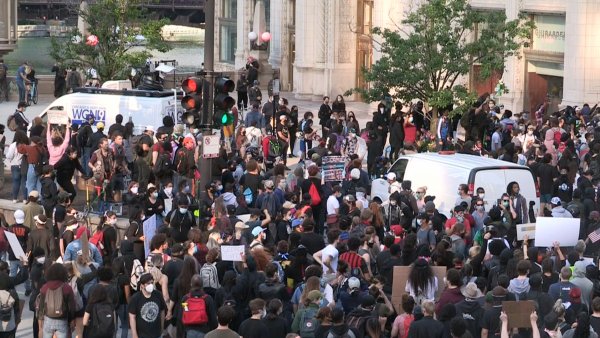 "We will be taking you into custody when you destroy property...when you burn cars, when you break out windows," he said, noting that police officers would be actively enforcing the new curfew.

The demonstration came after Chicago officials, following overnight incidents with protesters that resulted in more than 100 arrests, asked that additional protests remain peaceful. Demonstrations are expected throughout the weekend over Floyd's death.