Five winning tickets were sold in Illinois, three of which were in Chicago and its suburbs

The Illinois Lottery announced Thursday that five winning Powerball tickets, ranging from $1 million to $50,000, were sold in Illinois.

Three tickets, including one for $1 million, were sold in Chicago and its suburbs, according to a release.

"Illinois is full of winners - and including last night’s Powerball daw [sic] - there have now been five new millionaires created in Illinois in the past two weeks," the Illinois Lottery said. "There will be some excited families across the state of Illinois thinking about what to do with their windfall."

Here's a look at where the latest winning tickets were sold: 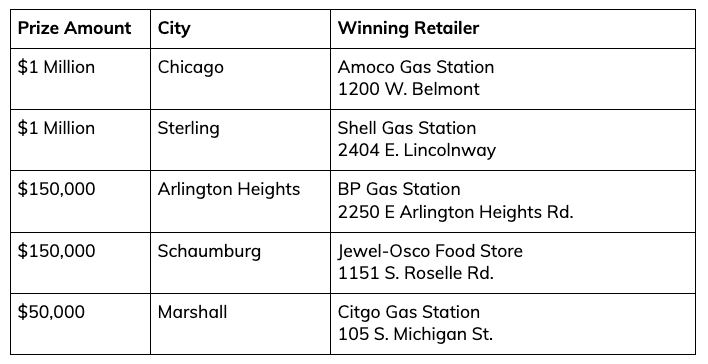 According to the Illinois Lottery, anyone who purchased a ticket from those locations should sign their name on the back of their ticket.

The Powerball jackpot sat at $730 million for the drawing Wednesday night. A winning ticket was sold in Maryland, pushing the new jackpot to an estimated $20 million for the next drawing Saturday.

Exposed to COVID? FDA Recommends Taking as Many as 3 Rapid At-Home Tests, Even if You Aren't Showing Symptoms

Illinois' Sales Tax Holiday Ends Today: Here's How You Can Save

The jackpot was the fourth-largest Powerball prize ever, and it came only a day after nobody won the even-larger Mega Millions prize, which now stands at $970 million.

Illinois residents who would like to participate in the Lottery can purchase tickets online at IllinoisLottery.com or using the Illinois Lottery app.

"When visiting a retailer, the Illinois Lottery reminds players to practice safe social distancing and adhere to the store’s safety measures," a release said.

Mega Millions and Powerball are both played in 45 states as well as Washington, D.C., and the U.S. Virgin Islands. Powerball also is offered in Puerto Rico.