Billie Eilish went full glam in a huge peach ball gown at the pandemic-delayed Met Gala on Monday night, while fellow host of the evening Amanda Gorman was breathtaking in cobalt blue custom Vera Wang with a diamond laurel wreath in her hair.

Rihanna, ever the Met Gala queen, showed up late in a huge black Balenciaga look and hat accompanied by A$ap Rocky in a multicolored quilted coat from ERL. She wore over 267 carats of Bulgari diamonds, including two choker necklaces.

Co-host Timothée Chalamet raced onto Fifth Avenue to take selfies with fans before walking up the steps of the Metropolitan Museum of Art for his entrance after a marching band and gymnast Nia Dennis kicked off the long-awaited evening. Last year's gala was canceled due to the pandemic.

This year's official theme of the fundraiser for the museum's Costume Institute was “American Independence,” leaving plenty of room for interpretation. Just ask Lil Nas X, who did a Lady Gaga-esque strip tease on the carpet in gold Versace, from cape to armor to embellished jumpsuit.

Eilish, the belle of the ball, wore Oscar de la Renta. She told Vogue: “It was time for this. I feel like I've grown so much over the last few years.”

Chalamet had Converse sneakers on his feet but Cartier diamonds on his look. Chalamet called his outfit, including Rick Owens sweatpants, “a bit of everything,” just like America. Alfonso Navas, the fashion editor for Esquire, lauded his fashion choices as a “a smart play on the theme by interpreting American icons in sportwear.”

Gorman's dress, which included more than 3,000 hand-sewn crystals, was made to evoke a starry night sky. She told Vogue she felt like Lady Liberty, reimagined. Her crown, the star poet said, was a nod to publishing. Another of the hosts, Naomi Osaka, wanted to celebrate all her cultures — Japan, Haitian and the U.S. — and picked a Louis Vuitton gown designed in collaboration with her sister, Mari Osaka. It was a swirly blue, aqua and purple print with long black ruffle sleeves and a wide red sash.

If this gala produced a trend, it’s huge statement sleeves, with some stars and stripes thrown in. There was a smattering of red, as in the red, white and blue of the American flag. Karlie Kloss wore red Carolina Herrera with huge ruffles at the neck and sleeves. Jennifer Hudson also chose red sans sleeves. 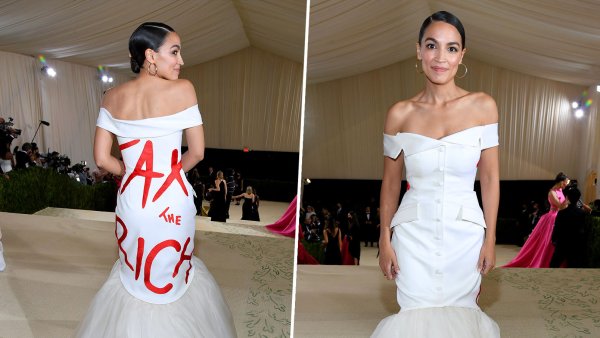 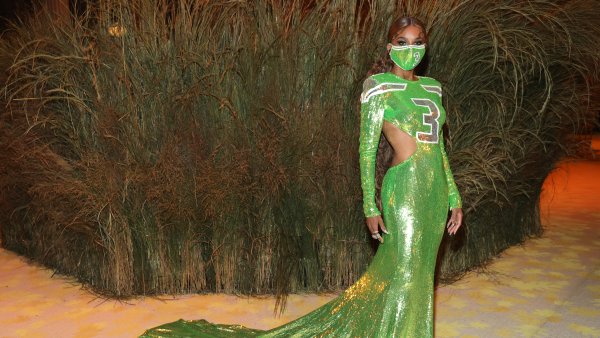 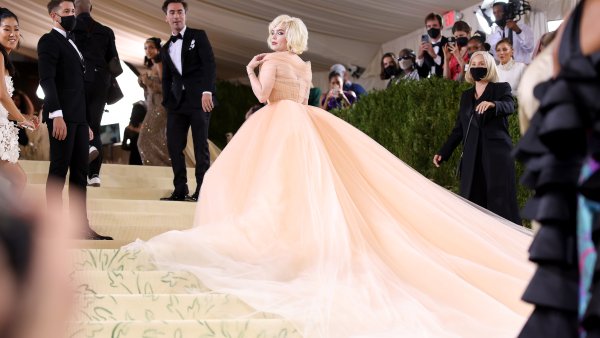 Also in red: Ella Emhoff, the daughter of the country’s second gentleman, Doug Emhoff, and Vice President Kamala Harris. She wore a bodysuit and high-shine trousers by Stella McCartney with a sheer top and a crystal design in all the right places. She wore Adidas by McCartney embellished in red and made partially of a recycled material derived from ocean plastic.

The gala, drawing standouts in fashion, TV, film, sports, tech and beyond, included tiny but mighty Olympian Simone Biles in an 88-pound Area embroidered gown of silver with a top adorned in a firework burst pattern and a huge train carried up the museum steps by six men. The gown was a collaboration with Athleta.

Ralph Lauren dressed Jennifer Lopez in a faux fur wrap with a dark brown crystal and beaded look in her signature plunge at the neck and high slit, a wide-brimmed Western-style hat on her head. She and Ben Affleck smooched with masks on days after their red carpet coming out in Venice.

She may still be Jenny from the Block, but Jennifer Lopez brought a decidedly western look to the Met Gala on Monday.

Dan Levy took the party's theme to the extreme in a blue confection from Loewe. It had, according to the brand, “printed leg of mutton sleeves" on a polo shirt with an applique of two men kissing.

Yara Shahidi wore silver custom Dior complete with a light hood. She said she was inspired by Josephine Baker. Harris Reed, in collaboration with Dolce & Gabbana, put Iman in a huge golden feathered head piece and equally adorned skirt of crinoline with a jacquard bustier.

Blake Newby, the style and beauty editor for Essence, called Iman's look “both massive and angelic.”

Gala overseer Anna Wintour arrived early with a wave to the crowd accompanied by her pregnant daughter, Bee, in a floral design with ruffles at the neck.

Along with oh-so-many jumpsuits, there were plenty of classic red carpet looks and a wave of gold, the latter including a Peter Dundas look worn by Mary J. Blige. It plunged to the belly button and beyond at the front and back.

MJ Rodriguez, the “Pose” star and first transgender performer to pick up an Emmy nomination in a major acting category, wore an old glam, black-and-white corseted look from Thom Browne. The designer called it a modern-day twist on classic American sportswear. She attended the gala with purpose.

“Not a lot of trans girls like myself get this opportunity," she said. "The human condition is what I'm here for.”

U.S. Rep. Alexandria Ocasio-Cortez brought a political message along with her outfit to the Met Gala Monday night.

U.S. Rep. Alexandria Ocasio-Cortez showed up in an Brother Vellies by Aurora James gown of white with a message splashed in red across the back: “Tax the Rich.”

“It's really about having a real conversation about fairness and equity in our system, and I think this conversation is particularly relevant as we debate the budget and reconciliation bill,” she said.

The evening had its share of what-the-heck moments, like a couple of horse heads on dresses and a green-haired Frank Ocean carrying a fake baby with a green face to match. Thom Browne gave the walking fashion statement Erykah Badu an extra-tall top hat with a bulky black look, a bunch of crystals and chunky bling around her neck.

Her purse was a black leather dachshund.

The fashion girls represented, Gigi Hadid in classic white Prada fresh from a slew of runway walks at New York Fashion Week, and Kendall Jenner in glittery, revealing silver by Givenchy. Jenner's look was inspired by “My Fair Lady.”

Kim Kardashian took masking to a new level at the Met Gala, donning a black dress complete with a full face mask.

The entrance of Jenner's older sister, Kim Kardashian West, caused a stir as fans wondered whether her estranged husband Kanye was the masked man at her side. It was none other than Demna Gvasalia, the creative director for Balenciaga who created her get-up: A black face covering worn with a T-shirt dress, catsuit and boots.

Newby told the AP the easiest and most obvious ways to stay true to the evening's theme is by wearing American designers. Many of the greats, including Michael Kors, showed up, along with smaller brands.

Lorde wore a custom upcycled gown with detailed beadwork and embroidery by Emily Bode, a New York designer who repurposes fabrics and garments for her menswear line.

“Her exquisite gown may have done more to make the case that upcycled fashion can be fabulous than a hundred sustainability summits,” said Erik Maza, style features director for Town & Country.

There were hair statements as well.

After 18 months in sweats, it was “clear that celebrities were beyond thrilled to give it their all," said Sara Tan, beauty director for a millennial-focused lifestyle site Refinery29.com.

They did in clothes, but also accessories and beauty, she said, noting Gorman's sparkly jewels across her face and Eilish's short, curled bob and classic winged liner in a definite ode to Marilyn Monroe.

"Not only did Gorman wear an American designer, Vera Wang, but she also nailed the ‘American Independence' dress code with a book-shaped clutch that read ‘Give Us Your Tired’ in reference to the Emma Lazarus poem featured on the base of the Statue of Liberty.

The gala, which raises money for the museum's Costume Institute, was pushed last year from its traditional May berth and morphed this year into a two-part affair marking the institute's 75th anniversary. It coincides with the opening of “In America: A Lexicon of Fashion,”the first of a two-part exhibition at the Met's Anna Wintour Costume Center.

Organizers invited 400 guests, less than the number that usually attend.