Gov. Pritzker Says a Bears Move Out of Chicago Would Be ‘Disappointing'

"Let me begin by saying I'm a Bears fan, and I know that it would be disappointing for me if the Chicago Bears moved outside of the city of Chicago. I know I share that view with many other Chicago Bears fans," Pritzker said during an unrelated press conference Thursday. "But I think this is a, you know, a private business, the Chicago Bears - as I have said before."

Pritzker said while the state has no intentions of intervening on the situation, he thinks "the Bears and the city of Chicago need to work out their differences in order for us to, you know, end up with the Bears staying in the city."

"Or not," he said. "That's not something that we're looking at." 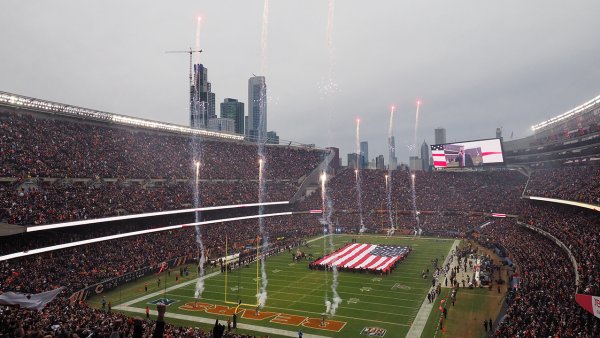 "Finalizing the PSA was the critical next step in continuing our exploration of the property and its potential," Bears President and CEO Ted Phillips said in a statement.

Phillips noted "much work remains to be completed" before the transaction is closed, however, leaving room for debate on whether the team is still considering staying in the city.

Pritzker said that, as a fan, traditions are important.

"I've been watching them at Soldier Field for, you know, an awfully long time and... there's something about having them in the city and nearby that's, you know, that's attractive to me and something I care about," he said.

"There's a tradition I think that we all feel, many of us about the city, Chicago," he added.

Mayor Lori Lightfoot on Wednesday called on the team to "come to the table" if they want changes made to Soldier Field, but she made clear the city's iconic stadium will remain - with or without a football team to call it home.

Lightfoot noted the Bears have a contract with the city through 2033, but said Soldier Field is an "incredible asset" regardless.

"I know that they've got a contract with us that runs through 2033 and, as I said to [George McCaskey], I'm not about breaking that contract and if they want to get out of it early, they're gonna have to pay us for it, but bottom line is, I want to talk to them," Lightfoot said during a press conference Wednesday. "I want to do what we can. I'm a Bears fan first and foremost. I want them to stay in the name city. And if we can keep them here we'll keep them here and we're gonna make every effort to do so. But as I said, stepping back from that, we've got to do a deal, that makes sense for the taxpayers of this city."

The mayor acknowledged the shortcomings with Soldier Field, the oldest stadium in the National Football League, including limited seating capacity and access difficulty, but said she believes there are "a lot of things we can do to enhance the fan and visitor experience that will obviously enhance the revenues for the Bears."

"But I'm not going to bargain against myself," she said. "They've got to come to the table and put their lists of asks on the table. I can't do anything about what their issues were from 20-plus years ago. That's not a productive conversation. What would be productive, is for them to come to the table now with a set of realistic asks and we will work with them to meet them where they are, but do it in a way that obviously is fiscally responsible for the taxpayers of the city."

The owners of the Arlington Heights horse racing venue, Arlington Park, had announced earlier this year that they intended to sell the property for redevelopment, and recently held what will likely be the final weekend of racing at the iconic venue.

“We recently submitted a bid to purchase the Arlington International Racecourse property,” Phillips said in a statement at the time. “It’s our obligation to explore every possible option to ensure we’re doing what’s best for our organization and its future. If selected, this step allows us to further evaluate the property and its potential.”

The biggest stumbling block for any potential Bears relocation is their lease with the city of Chicago at Soldier Field. The team could opt out of the lease in 2026, with a financial penalty of more than $80 million to do so.