Ukrainian leaders accused Russia of seizing 15 rescue workers and drivers from a humanitarian convoy trying to get desperately needed food and other supplies into the bloodied port city of Mariupol, which also came under naval attack after weeks of air and land strikes.

Ukrainian President Volodymyr Zelenskyy estimated that 100,000 civilians remained in Mariupol, the scene of some of the war's worst devastation, as Russia presses a nearly month-old offensive by bombarding cities and towns. Those who made it out described a shattered city.

“They bombed us for the past 20 days,” said 39-year-old Viktoria Totsen, who fled into Poland. “During the last five days, the planes were flying over us every five seconds and dropped bombs everywhere — on residential buildings, kindergartens, art schools, everywhere.”

Zelenskyy, speaking late Tuesday in his nightly video address to his nation, accused Russian forces of blocking the aid convoy despite agreeing to the route ahead of time.

“We are trying to organize stable humanitarian corridors for Mariupol residents, but almost all of our attempts, unfortunately, are foiled by the Russian occupiers, by shelling or deliberate terror,” Zelenskyy said.

The Red Cross confirmed a humanitarian aid convoy trying to reach the city had not been able to enter.

The convoy's attempt to deliver assistance came as Russian navy vessels joined in what have been weeks of Russian air and land strikes into Mariupol, U.S. officials said.

A senior U.S. defense official, speaking on condition of anonymity to give the Pentagon’s assessment, said Russian ships in the Sea of Azov added to the shelling of Mariupol. The official said there were about seven Russian ships in that area, including a minesweeper and a couple of landing vessels.

The hands of one exhausted Mariupol survivor shook as she arrived by train in the western city of Lviv.

“There’s no connection with the world. We couldn’t ask for help," said Julia Krytska, who was helped by volunteers to make it out with her husband and son. "People don’t even have water there.”

U.S. President Joe Biden is due to head to Europe for an emergency NATO summit Thursday on Russia's invasion and increasingly hostile stance toward the West, where NATO members and other European allies are strengthening their defenses. 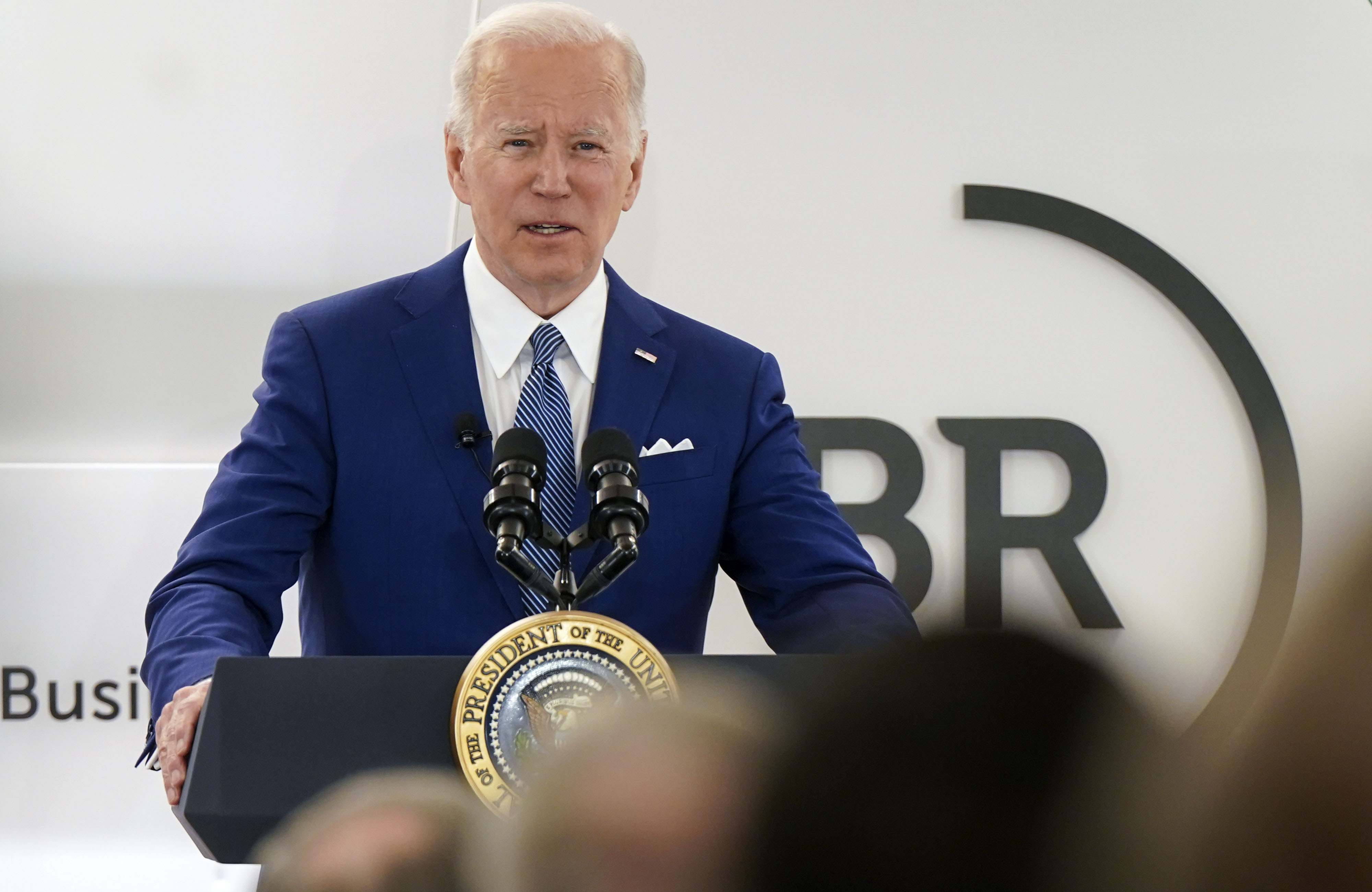 Biden to Announce New Russia Sanctions While in Brussels

Biden is traveling to Brussels and Poland, which has received more than 2 million Ukrainian refugees since the Feb. 24 invasion. He is expected to seek continued unity among Western allies and to announce more sanctions in a punishing series of economic and financial penalties on Russia.

Asked on CNN what Russian President Vladimir Putin had achieved in Ukraine, Kremlin spokesman Dmitry Peskov said: “Well, first of all, not yet. He hasn’t achieved yet.” But he insisted that the military operation was going “strictly in accordance with the plans and purposes that were established beforehand.”

Putin’s aims remain to “get rid of the military potential of Ukraine” and to “ensure that Ukraine changes from an anti-Russian center to a neutral country,” Peskov said.

In Ukraine's capital, Kyiv, explosions and bursts of gunfire shook the city, and heavy artillery fire could be heard from the northwest, where Russia has sought to encircle and capture several of the capital's suburbs.

A video posted by Ukrainian police showed them surveying damage in Makariv, including to the town’s police station, which an officer said took a direct hit to its roof. The police drove by destroyed residential buildings and along a road pocked by shelling. The town appeared all but deserted.

A Western official, speaking on condition of anonymity to discuss military assessments, said Ukrainian resistance has brought much of Russia's advance to a halt but has not sent Moscow's forces into retreat.

“We have seen indications that the Ukrainians are going a bit more on the offensive now,” Pentagon spokesman John Kirby told reporters separately in Washington. He said that was particularly true in southern Ukraine, including near Kherson, where “they have tried to regain territory.”

Russia's far stronger, bigger military has many Western military experts warning against overconfidence in Ukraine's long-term odds. Russia's practice in past wars in Chechnya and Syria has been to grind down resistance with strikes that flattened cities, killed countless civilians and sent millions fleeing.

But Russian forces appeared unprepared and have often performed badly against Ukrainian resistance.

More than 2.8 million people have evacuated Ukraine since Russia's invasion began, and 1.7 million have taken refuge in Poland, Ukraine's western neighbor. Poland is trying to disperse the large crowds by adding more train routes heading west into Europe, like to Germany and the Czech Republic. But as Jay Gray shows you from the Polish-Ukrainian border region, many people want to stay near Ukraine in case they need to go back, or catch up with relatives who haven't crossed yet.

The U.S. estimates Russia has lost a bit more than 10 percent of the overall combat capability it had at the start of the fight, including troops, tanks and other materiel.

The invasion has driven more than 10 million people from their homes, almost a quarter of Ukraine's population, according to the United Nations.

Thousands of civilians are believed to have died. Estimates of Russian military casualties vary widely, but even conservative figures by Western officials are in the low thousands.

Putin’s troops are facing unexpectedly tough resistance that has left the bulk of Moscow’s ground forces miles from the center of Kyiv, and they are making slow progress on apparent efforts to cut off fighters in eastern Ukraine. The Russians increasingly are concentrating their air power and artillery on Ukraine’s cities and civilians.

Talks to end the fighting have continued by video. Zelenskyy said negotiations with Russia are going “step by step, but they are going forward.”

“From my outreach with various actors, elements of diplomatic progress are coming into view on several key issues,” and the gains are enough to end hostilities now, he said. He gave no details.

The Western official, though, said that there were no signs Moscow was ready to compromise.

In the last update from Mariupol officials, they said on March 15 that at least 2,300 people had died in the siege. Accounts from the city suggest the true toll is much higher, with bodies lying uncollected. Airstrikes over the past week destroyed a theater and an art school where many civilians were taking shelter.

Zelenskyy, in his address, said more than 7,000 people were evacuated from Mariupol on Tuesday. Those who remain suffer “in inhuman conditions, under a full blockade, without food, without water, without medicine and under constant shelling, under constant bombardment,” he said.

Perched on the Sea of Azov, Mariupol is a crucial port for Ukraine and lies along a stretch of territory between Russia and Crimea. The siege has cut the city off from the sea and allowed Russia to establish a land corridor to Crimea.

It’s not clear how much of the city Russia holds, with fleeing residents saying fighting continues street by street.

Beyond the terrible human toll, the war has shaken the post-Cold War global security consensus, imperiled the world supply of key crops and raised worries it could set off a nuclear accident.

Anna reported from Lviv, Ukraine. Associated Press writer Yuras Karmanau in Lviv, and other AP journalists around the world contributed to this report.

Follow the AP’s coverage of the war at https://apnews.com/hub/russia-ukraine