Blake's mother, father and three sisters all spoke at a press conference Tuesday, describing their son and brother as a family man fighting to survive

Jacob Blake's mother issued an impassioned plea for people across the country to "take a moment and examine your heart," saying her son would be "unpleased" by the unrest sparked from his shooting by police over the weekend.

"Citizens, police officers, firemen, clergy, politicians: do Jacob justice on this level and examine your hearts," Julia Jackson said Tuesday, days after her son was shot multiple times in the back by Kenosha police officers. "We need healing. As I pray for my son's healing - physically, emotionally and spiritually - I also have been praying even before this for the healing of our country."

Jackson pleaded with all races and said she was praying for "all police officers and their families."

Blake's mother, father and three sisters all spoke at a press conference Tuesday, describing their son and brother as a family man fighting to survive.

At one point, Blake's father broke down in tears and walked away from the family's press conference.

Attorneys said Blake was rushed into surgery just before they spoke Tuesday afternoon.

"He's in surgery now and it won't be his last surgery," said Attorney Patrick Salvi Jr., of Chicago.

Salvi Jr. said bullets struck Blake's spinal cord, resulted in the near-complete removal of his colon and small intestine and damaged his kidney and liver.

Attorneys said Blake was paralyzed by the shooting but it remains unclear if that will be permanent.

"We are going to hope and pray for as good of a recovery as we can possibly get," Salvi Jr. said. "That type of rehabilitation and recovery, it's not free."

Salvi Jr. said he plans to file a civil lawsuit in the case.

Minutes earlier, Wisconsin Gov. Tony Evers declared a state of emergency in the midst of ongoing protests across the state following Blake's shooting. Evers had already increased the presence of the Wisconsin National Guard earlier Tuesday.

Blake's case has garnered national attention, with political leaders calling for a full investigation of the incident.

Attorneys for Jacob Blake and his family laid out demands for police in a Tuesday press conference and plans to file a civil lawsuit in the case.

Police said they were responding to a call about a domestic dispute when they encountered Blake on Sunday. They did not say whether Blake was armed or why police opened fire, they released no details on the dispute, and they did not immediately disclose the race of the three officers at the scene.

Video posted on social media appears to show three officers shouting and pointing their weapons at Blake as he walked around the front of a parked vehicle. When he opened the door and leaned inside, an officer grabbed his shirt and then fired into the car.

The governor said he had seen no information to suggest Blake had a knife or other weapon, but that the case is still being investigated by the state Justice Department.

The officers were placed on administrative leave, which is standard practice in a shooting by police. Authorities released no details about the officers and did not immediately respond to requests for their service records.

Crump said "the facts haven't been confirmed yet."

"What we are demanding is transparency," he said. "If there's dashcam video, we want you all to get it because this family has already asked for answers and gotten none."

Attorneys on Tuesday said Blake's three sons were in the car at the time of the shooting, one of whom was celebrating a birthday.

"These little boys, these three little boys are going to have psychological problems for the rest of their lives," Crump said.

Blake was immediately rushed to the hospital, and violent unrest followed, with vehicles set ablaze in multiple locations and windows smashed at businesses in downtown Kenosha. 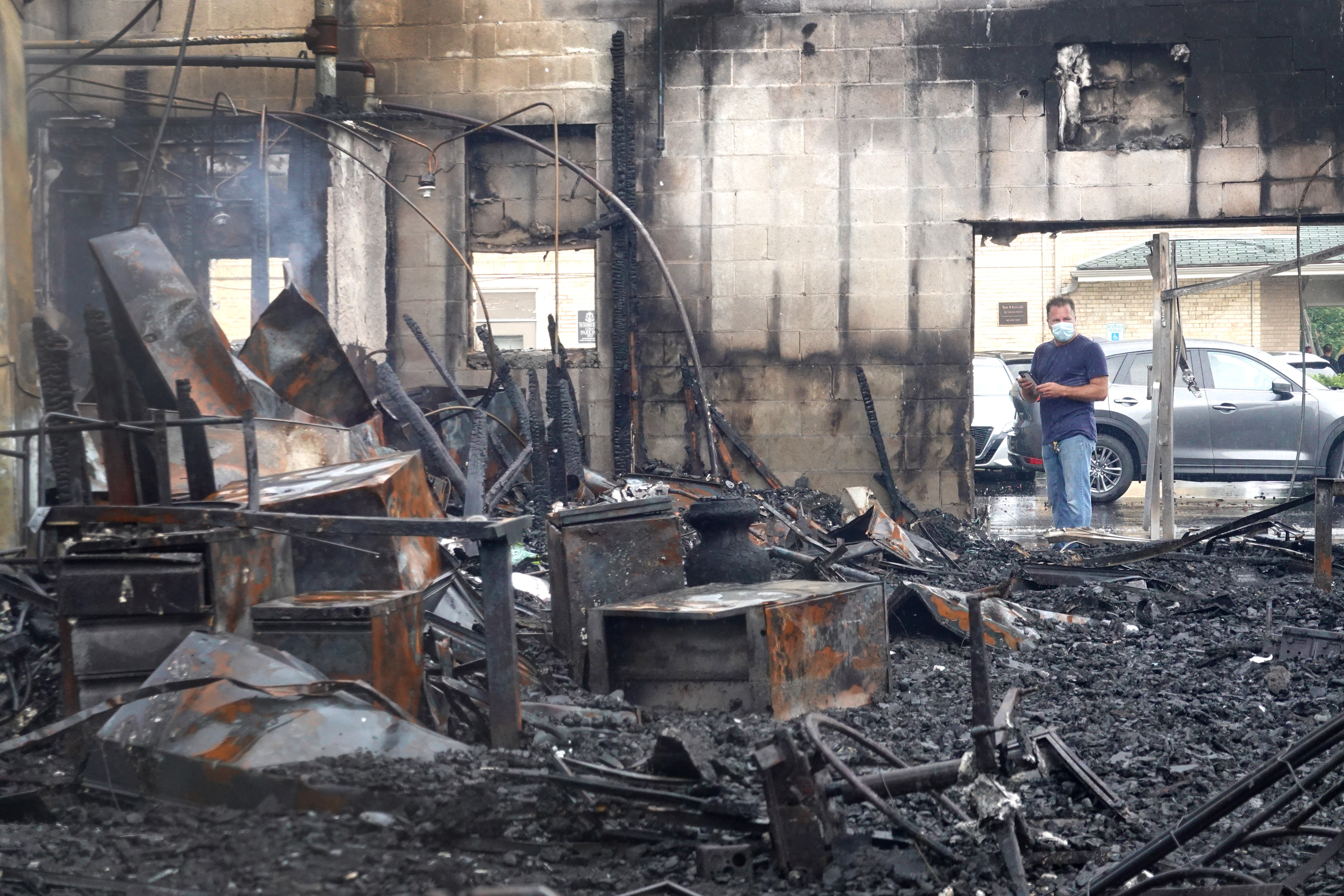 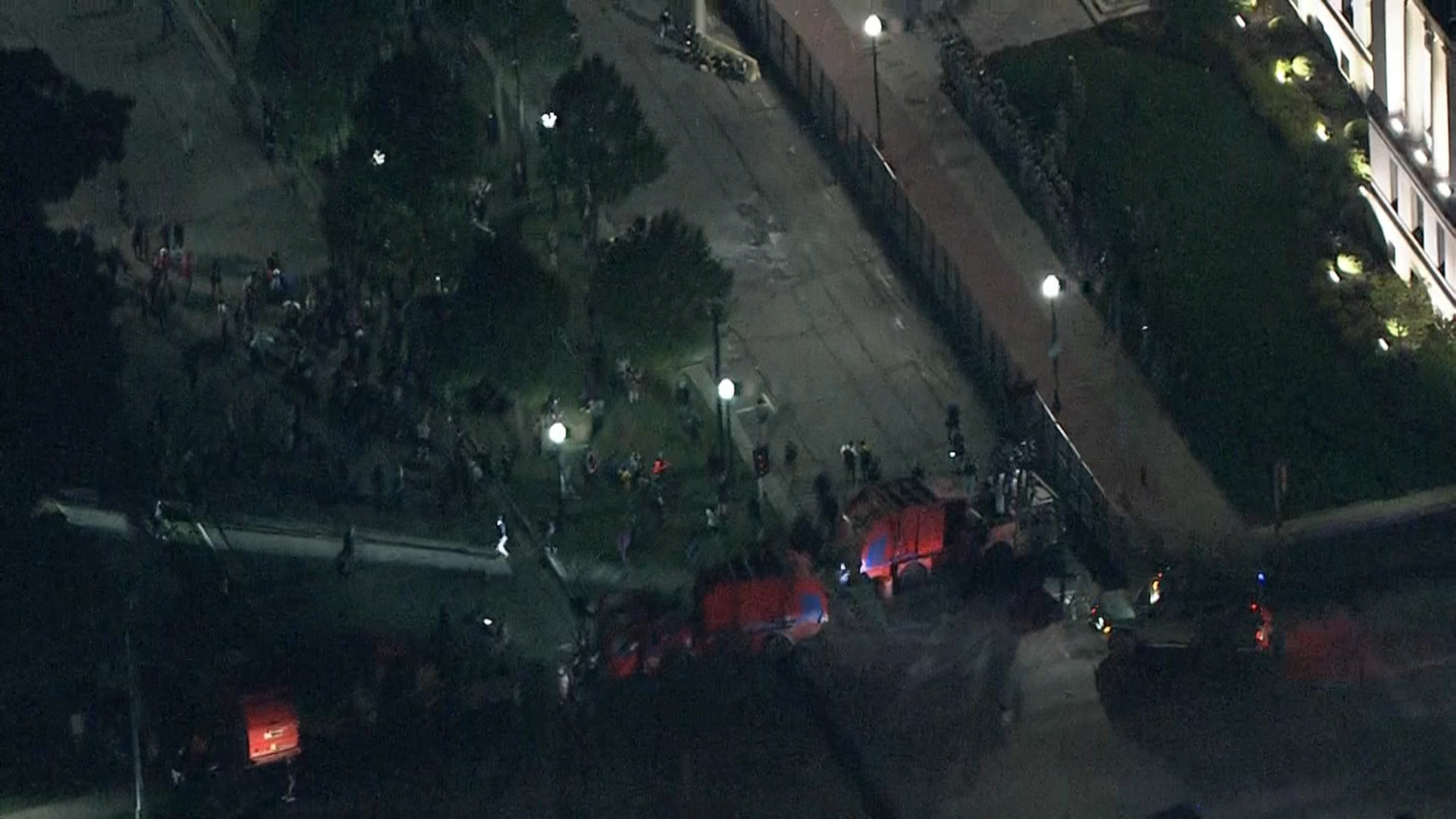 Anger over the shooting of Blake spilled into the streets of Kenosha for a second night Monday, with police again firing tear gas at hundreds of protesters who defied a curfew, threw bottles and shot fireworks at law enforcement guarding the courthouse.

Curfews have also been in place in Kenosha for two consecutive nights.

Jacob Blake’s three sisters spoke out about their anger and hurt following the police shooting of their brother, who they said is more worried about his family right now than himself. Blake was rushed into emergency surgery Tuesday. Doctors told his family that he is paralyzed following the shooting by police in Kenosha, Wisconsin.