When asked about the group of lawmakers' statement on Monday, Chicago Police Supt. David Brown said that in professional law enforcement, "we don't do politics"

A coalition of 10 elected officials came together on Sunday to condemn the Chicago police response to protests the day before, calling it a "continued escalation of surveillance, violence, and detention."

"Chicagoans have been told that it is necessary to spend 40% of the Chicago budget on police in order to prevent violence and promote public safety. Yet this weekend, just 24 hours after a 12-year-old boy was shot and at the same time as another shooting was taking place on the South Side, Mayor Lightfoot and Supt. Brown stationed thousands of officers downtown, where they kettled, pepper sprayed, and beat demonstrators - some of them as young as 17 years old," the group's statement, circulated by the United Working Families political organization, reads in part. 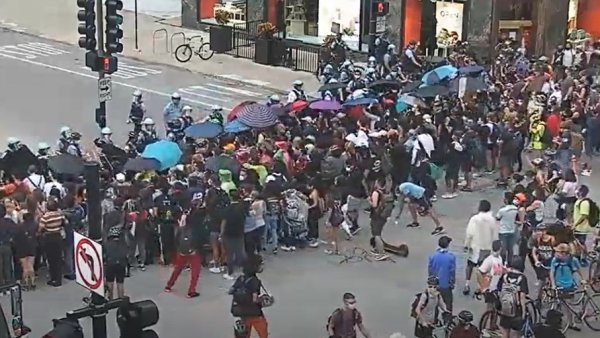 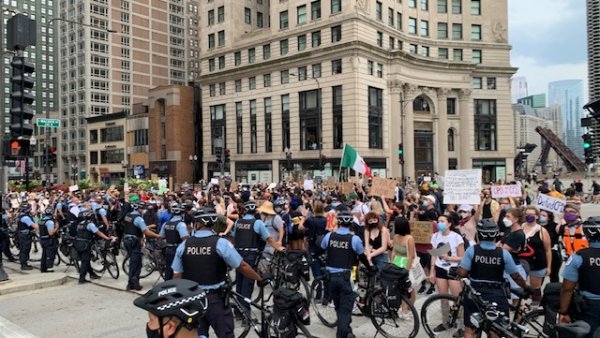 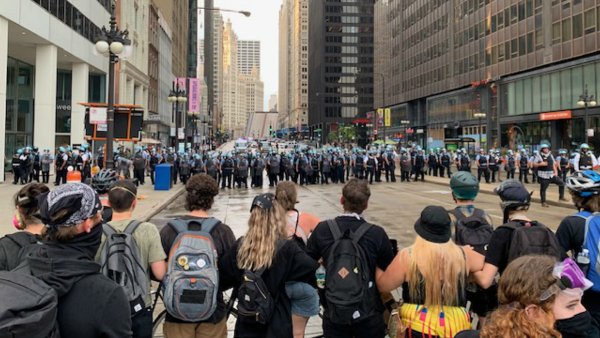 Kettling is a controversial crowd control tactic in which officers corral a group into a small area and surround them on all sides to immobilize them, direct them to a single exit or facilitate arrests, sometimes all of the above.

Videos of the scene downtown on Saturday appeared to show officers cordoning protesters off as the two groups clashed, violently in some instances.

The City of Chicago has been sued over kettling in the past, perhaps most notably reaching a $6.2 million settlement in a class-action lawsuit over use of the tactic to arrest more than 700 people at a 2003 demonstration against the Iraq War.

"Kettling needs to stop," Vasquez tweeted Saturday night, alongside a video showing officers appearing to surround protesters. Vasquez echoed critics of the tactic in adding, "It is what creates the tension. It’s what made things escalate the night of the first riots and it continues to."

When asked about kettling at a news conference on Monday, Chicago Police Supt. David Brown said he was not aware of any claims that officers were kettling protesters on Saturday.

CPD has placed blame on protesters for escalating violence against officers, arresting at least two dozen people, three of whom were charged with felonies as of Monday morning. One of those was a 25-year-old man charged with aggravated battery of an officer after police said he repeatedly hit an officer with a skateboard, releasing surveillance video showing the violent clash.

Chicago police released footage showing a clash between demonstrators and authorities on Saturday in downtown Chicago.

"Well, number one, I haven't heard those allegations that there was kettling going on," Brown said. "And again, there's video captured, people can judge for themselves and you're entitled to your own opinion, but just not your own facts."

"We once again condemn Mayor Lightfoot and Superintendent Brown for their use of police force against these demonstrators on Saturday night, and for the continued escalation of surveillance, violence, and detention of protesters," the elected officials' statement continued.

"We question the logic of spending police dollars on social media surveillance, pepper spray, and riot gear to beat teenagers while the directives of the federal consent decree go unmet and the murder clearance rate remains abysmally low," the group added, referencing the consent decree to enact sweeping reforms of the Chicago Police Department following a 2017 report from the U.S. Department of Justice that found CPD had a history of civil rights violations by officers, including a "pattern and practice" of excessive force and abuse.

Chicago police said at least 24 people were arrested and 17 officers treated for injuries after large demonstrations in the city’s downtown were “hijacked,” some becoming violent as officers were beaten with items like skateboards and pepper spray was deployed.

A June report from an independent monitor appointed to oversee the consent decree revealed that the city had missed more than 70% of the deadlines issued to implement some of those reforms in its first year under the court-ordered agreement.

“We are wholeheartedly with the protestors who have taken to the streets to demand a future free of violence," the elected officials' statement concluded. "Many of these young people are themselves anti-violence activists who, like too many other Black and Latinx Chicagoans, have lost friends and family to gun violence. It is their right to protest, and it is our responsibility to listen. We encourage Mayor Lightfoot and Superintendent Brown to do the same."

When asked about the statement from the group of elected officials on Monday, Brown demurred.

"One of the things I really like about professional law enforcement, we don't do politics. I want to try to keep it that way," he said.