California, which has been suffering through a surge in coronavirus cases, saw a rare bright spot Wednesday as enough northern counties saw their COVID-19 rates fall to allow some reopening.

The state also announced that it is opening vaccinations to all residents 65 and over in a push to accelerate distribution, in line with new guidance from the national task force.

Meanwhile, U.S. Rep. Ayanna Pressley, D-Mass., said her husband has tested positive for COVID-19. He joins three House representatives who tested positive earlier in the week. All four believe they contracted while sheltering at an undisclosed location during the riot at the U.S. Capitol. There were reports that some of their GOP colleagues refused to wear masks, even when asked.

In the sports world, the Phoenix Suns are now the latest NBA team to deal with contact tracing issues related to the coronavirus pandemic, and their game Wednesday against the Atlanta Hawks was called off by the league after it was learned they wouldn’t have enough players cleared to participate.

That was the third game on Wednesday’s schedule to be called, joining Utah at Washington and Orlando at Boston.

Just after 11 a.m., NBC 7 confirmed that some people waiting for their vaccines at the site at Tailgate Park were experiencing delays.

NBC 7 reached out to those running the station; a rep said the delay was about an hour-long due to logistical issues having to do with more doses of the vaccine arriving at the location.

During the county's weekly COVID-19 briefing, Dr. Eric McDonald, Director of Epidemiology for the county, said vaccinations were paused after allergic reactions were detected in six vaccine recipients.

That number was slightly higher than expected for that time period, so the Super Station paused vaccinations and swapped out that "lot" of vaccines out of an abundance of caution, according to Dr. McDonald.

The Super Station has contingencies in place for any type of reaction. It's too early in the investigation to know exactly what caused the allergic reactions, Dr. McDonald said.

The Massachusetts Democrat said in a statement that Conan Harris received a positive test Tuesday evening.

Three House Democrats announced within a 24-hour period yesterday that they had tested positive for COVID-19, prompting concern that last week’s insurrection at the Capitol has also turned into a super-spreader event.

Harris had accompanied Pressley to her swearing-in ceremony last week and was with her in the Capitol complex throughout the January 6 attack, Pressley said.

Harris has shown mild symptoms and remains in isolation, along with Pressley and staff who were in close contact.

“As my colleagues and I sought shelter from the white supremacist mob that violently attacked our seat of government, we were greeted by a different threat — one posed by my callous Republican colleagues who, in this crowded and confined space, repeatedly refused to wear masks when offered,” Pressley said in a statement.

Those who tested positive were among dozens of lawmakers who were whisked to a secure location when pro-Trump insurrectionists stormed the Capitol.

It’s not certain where and when lawmakers caught the illness, but the Capitol’s attending physician notified all House lawmakers of possible virus exposure and urged them to be tested, saying those in protective isolation last Wednesday “may have been exposed to another occupant with coronavirus infection.”

Calls to Reopen Classrooms Grow as Teachers Get Vaccinated

State leaders around the U.S. are increasingly pushing for schools to reopen this winter — pressuring them, even — as teachers begin to gain access to the vaccine against the raging pandemic.

Ohio Gov. Mike DeWine offered to give vaccinations to teachers at the start of February, provided their school systems agree to resume at least some in-person instruction by March 1. And Arizona's governor warned schools that he expects students back in the classroom despite objections from top education officials and the highest COVID-19 diagnosis rate in the nation over the past week.

“We will not be funding empty seats or allowing schools to remain in a perpetual state of closure,” Republican Gov. Doug Ducey said this week. “Children still need to learn, even in a pandemic.”

The nation’s overall death toll from COVID-19 has topped 380,000, closing in fast on the number of Americans killed in World War II. Confirmed infections have reached about 23 million.

President-Elect Joe Biden initially pledged to reopen a majority of the nation’s schools within his first 100 days but recently revised the goal to most of the country’s K-8 schools. He has said teachers should be eligible for vaccinations as soon as possible after those who are at highest risk.

The Phoenix Suns are now the latest NBA team to deal with contact tracing issues related to the coronavirus pandemic, and their game Wednesday against the Atlanta Hawks was called off by the league after it was learned they wouldn’t have enough players cleared to participate.

That was the third game on Wednesday’s schedule to be called, joining Utah at Washington and Orlando at Boston. It also marks the second consecutive time that a team ran into issues after playing in Washington; the Miami Heat lost eight players to COVID-related issues following their road game against the Wizards on Saturday.

The Hawks-Suns postponement was the sixth in the league since Sunday, and the seventh overall this season because of virus issues. The Suns, Hawks, Heat, Wizards and Philadelphia 76ers are among the teams dealing with significant roster depletion in recent days because of either positive tests, tracing — which indicates if someone has been in an unsafe amount of contact with a person who tested positive — or both.

California Sees Bright Spot in 'Most Intense Surge' of Virus

California has lifted a stay-at-home order for 13 northern counties with improving hospital conditions, but most of the state’s population remains under tight restrictions in the deadly coronavirus pandemic.

The state on Tuesday lifted the order in the Sacramento region — a rare turn of good news as the state pushes through what Gov. Gavin Newsom called its "most intense surge” of the coronavirus.

California has seen an enormous surge of cases, hospitalizations and deaths since Thanksgiving.

The order imposed Dec. 10 banned gatherings outside a household and restricted many businesses. With virus cases and hospitalizations more stable, the region can resume outdoor dining and worship services, reopen hair and nail salons and other businesses, and increase capacity at retailers. Gatherings up to three households are allowed.

Texas has reported more than 2 million coronavirus cases since the start of the pandemic, according to NBC News.

On Wednesday, the Lone Star State became the second to reach the grim milestone, following California, which topped 2 million cases back in December.

Texas is the second-most populous U.S. state. California is the first.

Nationwide, the U.S. has seen nearly 23 million cases and 380,000 virus-related deaths, according to a tally by NBC News.

The Texas city of El Paso, which sits on the border with Mexico, has become one of the worst COVID-19 hotspots in the nation, with over 81,000 positive cases. NBCLX talked to locals battling the crisis, including El Paso County Judge Ricardo Samaniego and Dr. Zeinab Mohammad, about what they're experiencing on the ground.

Operation Warp Speed Chief Adviser Dr. Moncef Slaoui has submitted his resignation at the request of the incoming Biden team, under a plan that would see him stay in the role for a month to help with the transition, according to two people familiar with the situation.

Slaoui’s role leading vaccine development for the unprecedented government effort is expected to be diminished after Jan. 20, said the people, who declined to be named because the plan isn’t yet public. It would end by Feb. 12.

It’s not clear who will take the scientific lead for the Biden team focused on Covid vaccines after that, or if someone will be appointed into that role. There are already two vaccines authorized in the U.S., with three more in late-stage clinical trials. Jeff Zients is Biden’s coordinator of the Covid-19 response, while Bechara Choucair will be Covid-19 vaccine coordinator, focused on speeding vaccine delivery.

HHS Secretary Alex Azar announced on Tuesday that the White House coronavirus task force would be advising states to begin to vaccinate the next tier of priority recipients, including anyone over the age of 65 and anyone with a documented comorbidity.

With Season Set to Start, 27 NHL Players Have Tested Positive for COVID

Twenty-seven players in the National Hockey League have tested positive for COVID-19, the league said Tuesday — with 17 of those on the Dallas Stars.

The NHL said in a statement that most of the Stars players are asymptomatic and "are currently recovering without complication." The 27 players who are positive for the illness are across nine teams.

The NHL season starts Wednesday, but it will be a condensed 56-game regular season that ends May 8. Normally, there are 82 regular-season games.

The Stars had been set to open their season Thursday in Florida against the Panthers, but the first three games have been postponed and the next one on their schedule is Jan. 19. The NHL made the announcement Jan. 8 after six Stars players and two staff members had tested positive.

Rick Bowness, the Stars head coach, told reporters Tuesday that they knew with COVID-19 there could be some uncertainty with the roster. "We work with the players that we have," he said, adding that decisions would be made as players return.

While decisions about how to distribute the vaccine are being left to state and local health officials, as of Tuesday morning the CDC reported that more than 9.3 million people had received the first of the two needed doses of the vaccine. In total, more than 27.7 million doses have been administered.

The move to use large venues like stadiums comes as many states are increasing distribution to groups beyond health care workers and nursing home residents, to include senior citizens, teachers, first responders and essential workers.

Pharmacies will soon begin administering shots as hospitals are pushed to the brink. 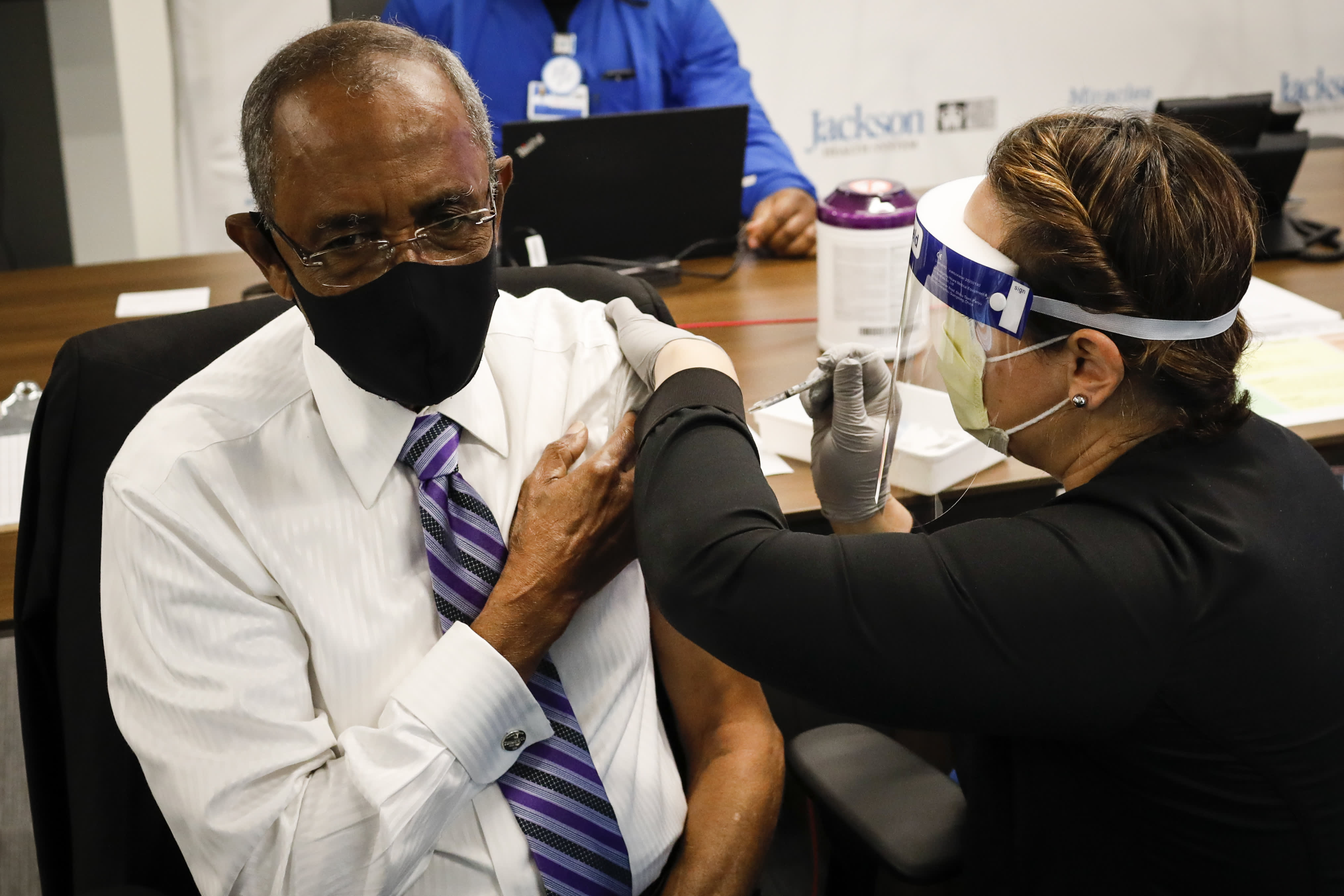 CDC Expands Covid Vaccination Guidelines to Everyone 65 and Older 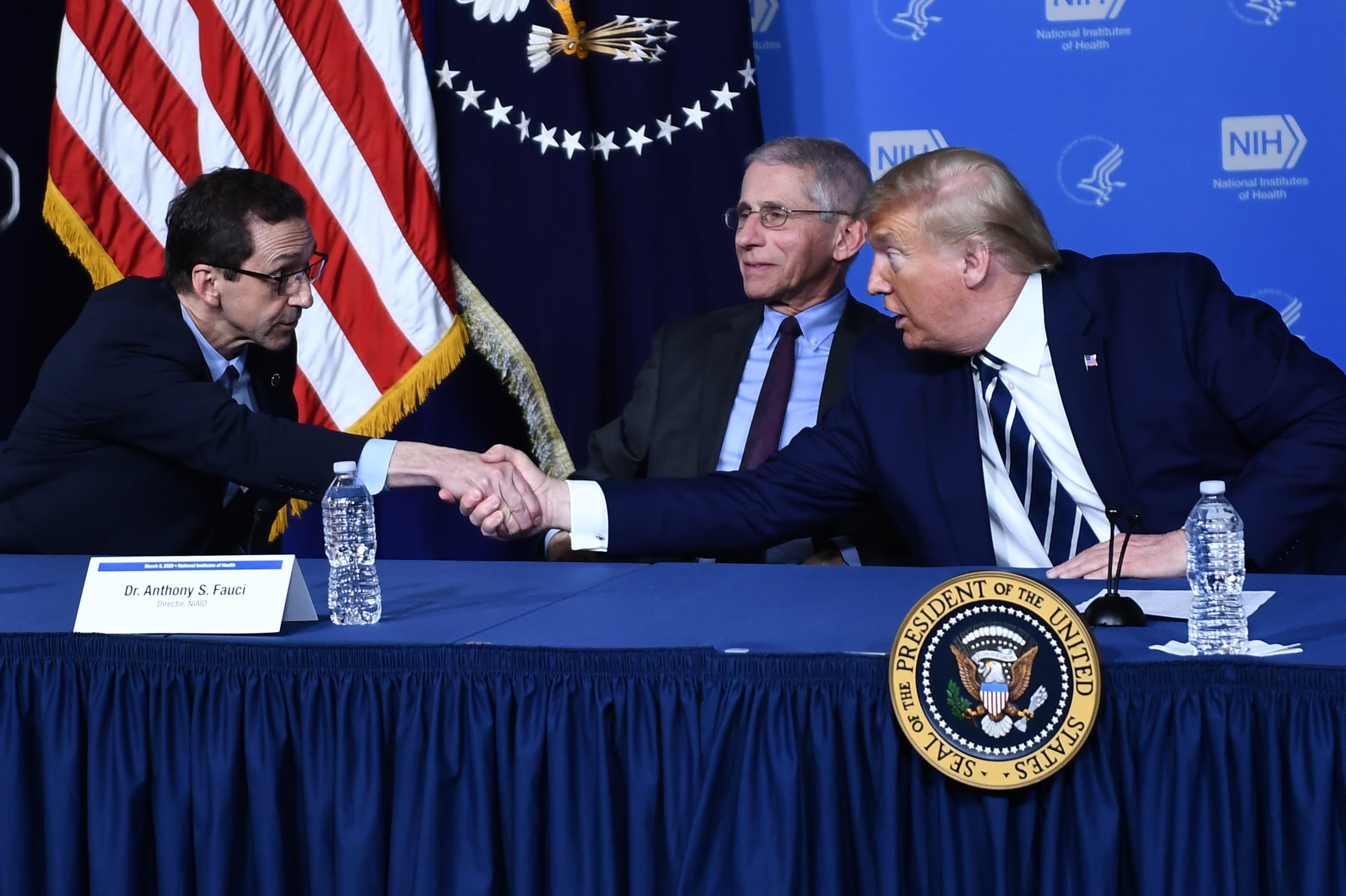