Jimmy Hayes Slotted on Second Line After Hawks Call Up

When Jimmy Hayes was called up to the Chicago Blackhawks yesterday, the assumption was that he would be expected to replace Patrick Sharp in the lineup. Whether he was to be on the second or third line, his size and scoring touch were clearly on the mind of GM Stan Bowman when he recalled the 6’5” forward, but it wasn’t clear which line he would end up playing on.

Wednesday’s practice at Johnny’s IceHouse West revealed the answer to that question, as Hayes skated on the left wing with Dave Bolland as his center and Patrick Kane on the right win. The placement of Hayes on that line allows the other three lines to settle more into their original forms from before the Sharp injury, with Brandon Saad, Jonathan Toews, and Marian Hossa locking down the top line, and Bryan Bickell returning to the third line with Andrew Shaw and Viktor Stalberg.

The move is welcome news to Hawks fans who questioned the wisdom of breaking up that third line in the first place. Bickell has been long looked at as a disappointment not only by Hawks fans, but also by head coach Joel Quenneville himself, but he has really hit his stride this year with Shaw centering a line with him and Stalberg. He has been moving well without the puck, using his physicality a bit more, and really asserting himself as a solid force in the bottom six forwards of the Hawks.

The issue, of course, is that this very well could just be the amplified efforts of a guy seeking a nice contract, as Bickell will be an unrestricted free agent at season’s end. Regardless of what is motivating the improved play, the hope is that reinstalling him on the third line will be one of the steps necessary to getting the ship righted for the Hawks, who have lost two games in a row. 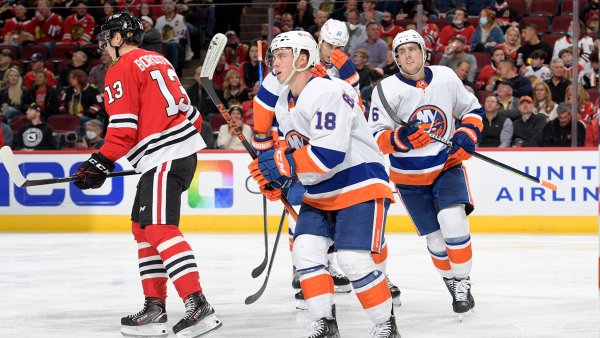 As for Hayes, there will be people who will cite his ability to discourage people from taking runs at Kane as a reason for optimism about his presence on the second line, but it is his scoring touch that should be the bigger addition to the lineup.

Having a guy with Kane that is a legitimate scoring threat is especially necessary this year, when the media has done nothing but lavish attention on the former #1 overall pick’s Hart Trophy-worthy season. Teams are game planning in a big way against him, and Hayes should help to divide the attention a bit to get Kane more open looks.

Thursday night will be the first opportunity for fans to see the new look second line in action, when the Hawks take on the Columbus Blue Jackets in the first game of a four game road trip.