Stormy weather threatens to bring large hail, damaging wind gusts of up to 60 mph and the slight potential for a brief tornado

A stormy Monday evening could bring the potential for severe weather to the Chicago area, with the threat of large hail, damaging winds and possibly even a brief tornado on the horizon.

After a summer-like weekend, Monday started off mostly cloudy, breezy and mild with scattered, light showers. But as sunshine potentially breaks through, it will destabilize the atmosphere as a cold front moves through.

Showers and storms are expected to grow more numerous by the late-afternoon and evening hours, moving in from west to east. Storms that do develop have the potential to become severe, with large hail and damaging wind gusts of up to 60 mph. While the tornado threat remains low across the area, a small risk still remains, meaning a brief tornado can't be ruled out with this system, according to NBC 5 Storm Team meteorologists. 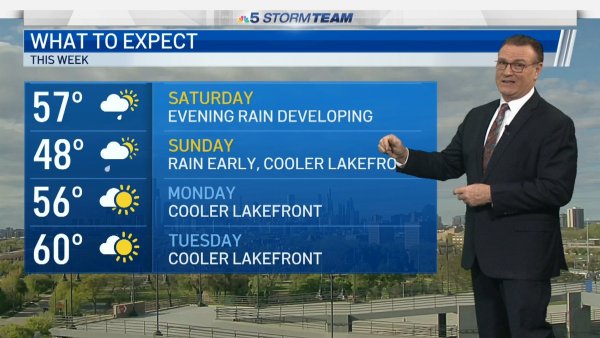 The entire Chicago area is under an elevated risk of severe weather, but the biggest threat will likely be in areas far south and west of Chicago.

The storms will likely end by the late-evening hours, leaving behind a few lingering spotty showers.

Temperature highs Monday will be in the 70s, the highest of the work week and the start of a cooling trend across the area. Conditions are set to dip back into the 60s and mainly the 50s for the remainder of the week.