A winter storm warning continues for several counties until 6 p.m. Wednesday and others through 6 p.m. Thursday

Heavy snow hit much of the Chicago area hard Wednesday morning as the peak of the first of two rounds of snow arrived, making for dangerous travel conditions, closing a number of schools and bringing more than 7 inches of snow in a matter of hours to some spots.

A winter storm warning remains in effect for Kankakee County, along with Newton and Jasper counties through 6 p.m. Thursday.

Chicago and its northern suburbs could see lake-effect snow on Thursday, with some locations potentially seeing significant accumulations, according to forecast models.

Here is the latest on the winter storms and what's happening across the area.

Even as the area digs out from the heavy snow that fell on Wednesday, some locations will once again have to deal with a wintry mess on Thursday, as warnings and advisories remain in effect for numerous communities.

A winter storm warning that began Tuesday in Kankakee County in Illinois, along with Newton and Jasper counties in Indiana, will remain in effect until 6 p.m. Thursday, according to the National Weather Service.

According to the alert, light snow will once again resume on Wednesday night and into Thursday morning, and although only light accumulations are expected, windy conditions will cause significant challenges with blowing and drifting snow, especially on rural roadways.

An additional 1-to-4 inches of snow are possible, with areas south of U.S. 24 being hardest-hit, according to forecasters.

On the corner of Indianapolis Blvd. and Marina Dr. in Hammond, a quiet business center quickly became a traffic nightmare, as numerous cars quickly became stuck in drive-thru's and parking lots.

“I wanted Taco Bell. Do I need to say anything else," Prentice Major said as volunteers worked to move his car out of the fast food restaurant.

Major's day did not get much better, as the restaurant he frequents was closed due to the storm. He did eventually make it out of the snow after three volunteers came to the rescue.

Among them a young man on an ATV retrofitted with a snow plow, clearing a path for drivers, an investment he made two years ago is now paying off.

“A guy at the gas station said somebody was stuck over here… I got gas came over here started helping him out and we got him out,” Margarito Zuniga Jr. told NBC-5 News as he took a break from clearing the roads.

Snow plow drivers continued their hard work after the storm dropped as much as a foot of snow in some locations.

Many schools across the Chicago area will continue remote learning on Thursday as the region cleans up from a winter storm that dumped a foot or more of snow in some locations, but Chicago Public Schools students will be asked to attend in-person learning, the district announced Wednesday evening.

CPS announced that classrooms will be open on Thursday as the system moves out of the area.

“Classes will be in session for all CPS students,” the district said in a social media post.

While Chicago schools will be back in session, many other districts will remain remote on Thursday, including schools in Lyons, Oak Lawn, Palos Park, and Tinley Park.

6 p.m.: Winter Storm Warning Expires in Most of Northern Illinois

A winter storm warning that was in effect for most of northern Illinois has been allowed to expire, according to the National Weather Service.

Some snow may still fall in the impacted areas, but it has largely diminished, according to forecast models.

A winter storm warning does remain in effect for Kankakee County in Illinois, as well as Lake, Porter, LaPorte, Newton and Jasper counties in Indiana, through 6 p.m. Thursday.

A winter storm warning has been allowed to expire for most of northern Illinois, but lake-effect snow could bring significant accumulations overnight and into Thursday for parts of Cook County.

The National Weather Service has issued a winter weather advisory for all of Cook County that will go into effect at 9 p.m., and will run through 6 p.m. Thursday.

The advisory calls for slippery road conditions and “sharply varying visibility,” with blowing, heavy snow possible because of the lake-effect snow.

While it is unclear just how much snow will fall due to the fickle nature of lake-effect snow, the latest High Resolution Rapid Refresh (HRRR) projections provided by the NBC 5 Storm Team currently show the plume of snow hitting northern and central Cook County, with more than a foot of snow possible in a limited area that includes Glencoe, Glenview, and Niles.

Nearly 800 flights at Chicago-area airports have been canceled as a winter storm continues to pound the area.

According to the Chicago Department of Aviation, 701 flights have been canceled at O'Hare International Airport as of 4 p.m., along with 94 flights at Midway Airport.

The heaviest snowfall on Wednesday fell during the morning commute, according to the National Weather Service, but snow bands continued to develop on the backside of the system, causing more accumulations to pile up in areas across the region.

4 p.m.: Heavy Snow Continues to Fall as Nearly a Foot of Accumluation Reported in Some Areas

Some parts of the Chicago area are seeing some eye-popping snowfall totals on Wednesday afternoon, according to the National Weather Service.

In Midlothian, 10.8 inches of snow have fallen so far, according to a trained weather spotter.

In Carbon Hill, 9.8 inches of snow have been reported, according to officials.

Northwest Indiana has also been hit hard, with Morocco reporting 11 inches of snow during the storm. Rensselaer has also reported eight inches of snowfall, as has nearby Remington.

3 p.m.: Museum of Science and Industry Announces Closure Wednesday and Thursday Due to Snow

The Museum of Science and Industry in Chicago said it will close Thursday due to an ongoing winter storm .

"Due to the winter storm in the area and to protect the safety of our guests and staff, the Museum will be closed from 3 p.m. today until 9:30 a.m. on Friday, February 4," the museum wrote on Facebook.

After as much as 10 inches of snow dropped in some Chicago suburbs, winter storm warnings continue for several counties until 6 p.m. Wednesday.

Use the map below to track how much snow fell in your area.

9:45 a.m.: After Storm Dumps More Than 9 Inches of Snow on Parts of Chicago Area, Round 2 is Next

Wednesday morning's heavy snow is expected to taper heading into the afternoon hours, but don't be fooled because another round of snow is just hours away for many in the Chicago area.

Winter storm warnings continue for several counties until 6 p.m. Wednesday, following a morning that saw as much as 9 inches of snow in some Chicago suburbs.

For some counties, particularly south and in northwest Indiana, however, the warnings will linger through Thursday as several additional inches of snow could still fall.

Winter storm warnings continue for several counties until 6 p.m. Wednesday, following a morning that saw as much as 9 inches of snow in some Chicago suburbs.

9:40 a.m. Totals Piling Up, More Than 10 Inches Possible in Some Spots

9 a.m.: Snow fall Rates of More Than an Inch an Hour Continue for Some

Trains on Metra's Union Pacific North line were operating with some delays Wednesday morning after crews had to make "emergency track repairs."

In addition, the Chicago Transit Authority reported significant delays on some lines after "heavy train congestion" as the Howard station.

Reports have indicated blowing snow around some locations, which could also be making for dangerous travel conditions.

7 a.m.: Forecasters Warn 'the Worst Part of This Storm' is Here

You can track the latest statistics throughout the morning at this link from the Chicago Department of Aviation.

Illinois State Police said just before 7 a.m. that "the roadways are deteriorating throughout Illinois."

At least two interstates were being closed due to multiple crashes as of 6 a.m., the agency said.

6 a.m.: Early Snowfall Totals Show as Much as 7 Inches in Hours for Some; Totals Growing Quickly

Officials are warning drivers to stay off the roads as snowfall rates heighten during the morning commute.

In Chicago, the city’s Streets and Sanitation department has deployed its fleet of more than 200 salt spreaders and plows to help keep arterial roads, as well as DuSable Lake Shore Drive, as clear as possible.

The Illinois Tollway is also engaging its entire fleet of snow-removal vehicles and salt spreaders, according to officials.

Even as plows fight to keep roadways clear, residents are still being urged to postpone any unnecessary travel, or to use public transportation when possible.

The Chicago Transit Authority says it is working to keep railways clear, and will continue to deploy resources to assist with the morning commute on Wednesday.

CTA announced most rail service will continue operating Wednesday amid the winter weather conditions, aside from some signaling issues on the Green Line.

Metra said no changes have been made due to weather conditions and schedules will remain in effect. However, Metra noted that some train lines could experience delays.

Track the Storm With Live Doppler 5

We are tracking the arrival of this week's winter storm with Live Doppler 5, and you can stay tuned to the radar at the player above, or via our interactive radar here:

As the winter storm barreling through the Midwest overnight continues into Wednesday, numerous Chicago-area public and private schools have canceled classes or announced switched to remote learning for the day.

Chicago Public Schools announced that all in-person classes will be in session Wednesday, though no decision has been reached on Thursday classes. 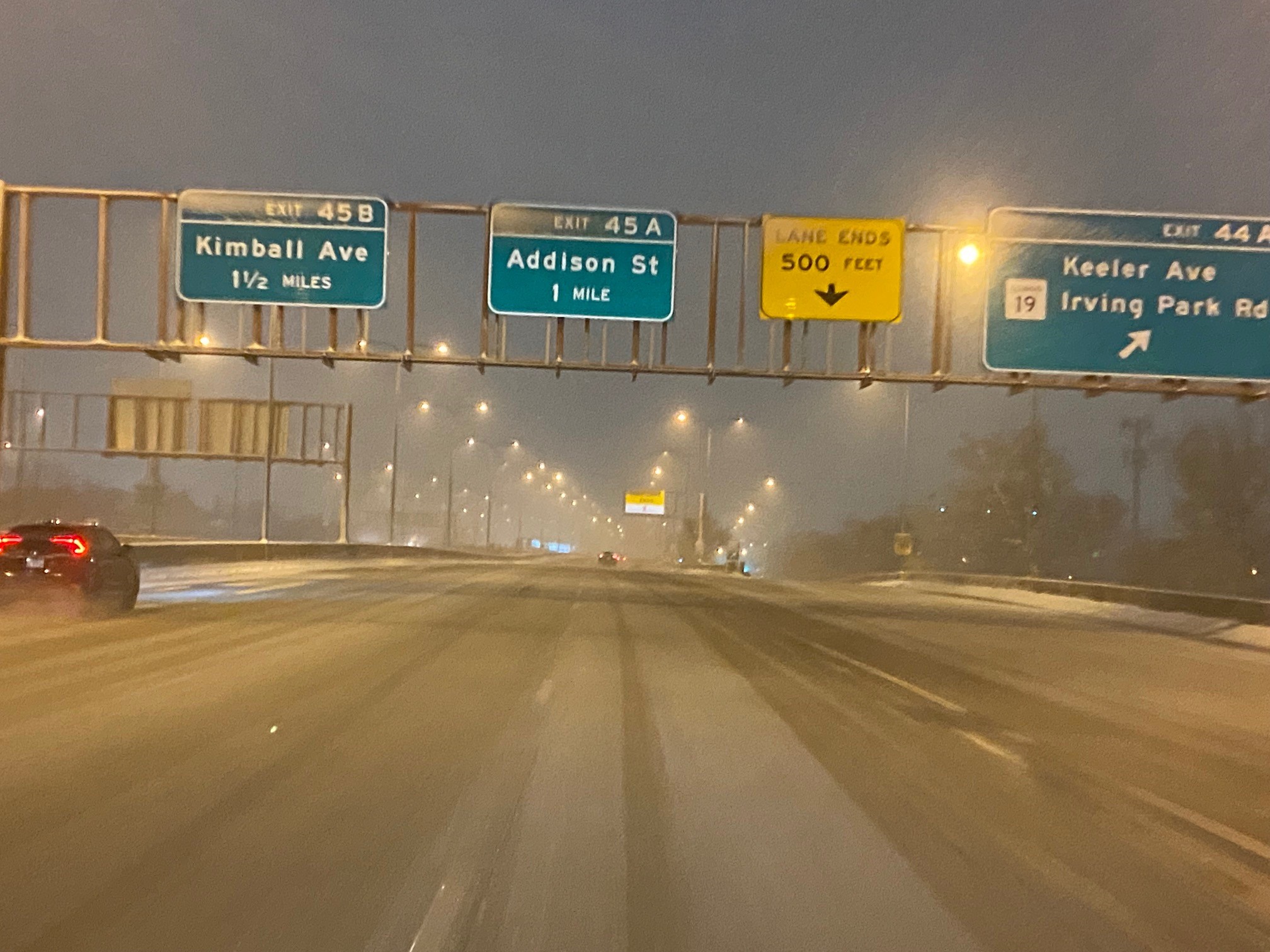 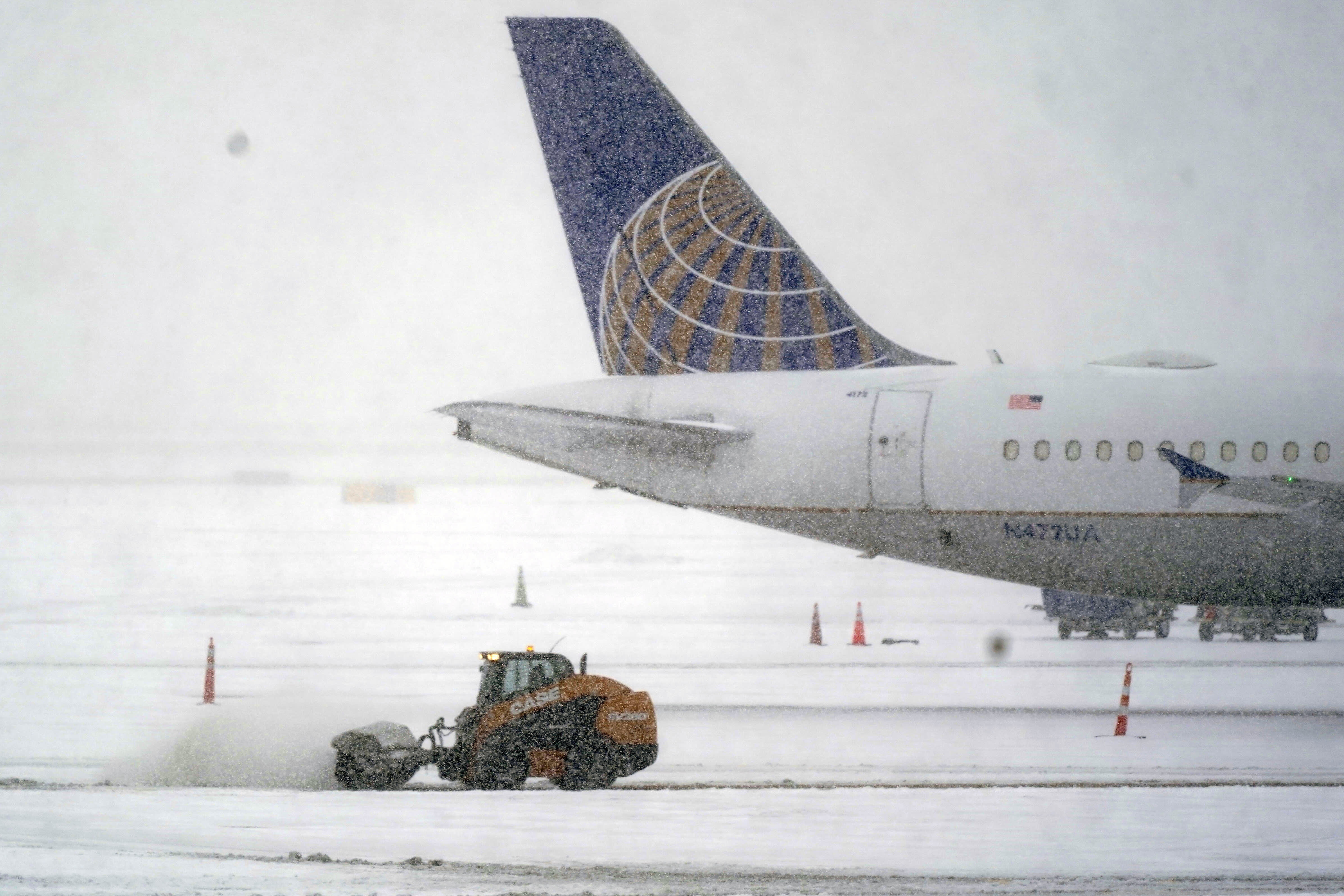 Massive Winter Storm Grounds Thousands of Flights Across the U.S.

Be prepared for your day and week ahead. Sign up for our weather newsletter.