The Chicago area is expecting its most significant snowfall of the season on Monday evening, with 5-to-8 inches of snow possible in some locations.

Areas south of the city may still see some snow, but residents can also expect hazardous travel conditions because of icy precipitation in those areas, according to current forecast models.

Here are the latest weather headlines from Chicago and the rest of the state of Illinois:

As a winter storm begins to move its way into the region, the Illinois Department of Transportation says that the ramp from the inbound Chicago Skyway onto the inbound Dan Ryan Expressway has been closed due to hazardous conditions.

According to a message posted to social media, the ramp was shut down Monday evening as a result of the weather, which is bringing snow, gusty winds and slippery conditions to the region.

Roadways are becoming icy and slippery in Kankakee County as a winter weather advisory remains in effect.

According to the Kankakee County Sheriff's Department, motorists are being asked to stay home unless necessary, with dropping temperatures and mixed precipitation causing hazardous travel conditions.

Kankakee County is one of multiple counties under an advisory until Tuesday afternoon, with icy precipitation and gusty winds both posing a threat to travelers.

Gloves, hats, mittens, shovels and salt flew off the shelves Monday at suburban Chicago stores as the area braced for what could be the largest snowfall of the season so far. NBC 5's Chris Coffey reports.

Schools across the area are shifting to e-learning or closing their doors on Tuesday as a result of winter weather that's expected in the area.

For the most up-to-date information, you can visit the running closures list here.

As a winter storm approaches the Chicago area, more than 150 flights have been canceled at the city’s major airports, according to the Department of Aviation.

According to the CDA website, more than 100 flights have been canceled at O’Hare International Airports, with just under 50 flights canceled at Midway as of 3:15 p.m.

Officials at ComEd are preparing for this week’s winter storm, saying that they are positioning trucks and opening its Emergency Operations Center to respond to any potential power outages.

The storm, which led to a winter storm warning across much of northern Illinois, is expected to challenge the power grid in several ways. With forecasted heavy snow of 5-to-8 inches in some locations, the possibility of freezing precipitation in areas in central Illinois, and with gusty winds expected throughout the area, the utility says that it is prepared to respond to any potential power interruptions.

“We are positioning our people and equipment to respond quickly and safely to any interruptions that result from this storm,” ComEd President and COO Terry Donnelly said in a statement.

City, county and state agencies are activating their fleets of snow plows and salt spreaders ahead of a winter storm that is expected to wallop the state Monday and into Tuesday.

Forecasts are calling for heavy snowfall across northern Illinois, with a winter storm warning in effect for much of the Chicago area, and for freezing rain, snow and hail in central and southern Illinois. A winter weather advisory is in effect for far southern portions of the NBC 5 viewing area, as well as swaths of central Illinois.

The Illinois Department of Transportation, the Illinois Tollway, and the Chicago Department of Streets and Sanitation are mobilizing their fleets of snow vehicles to combat the storm, with salt spreaders and plows set to try to keep roads safe during the storm.

You can track the storm with our interactive radar here, or on this page:

A Rough Timeline of Events Monday

Snow will slowly start to move into the area Monday afternoon, with winter storm warnings taking effect in northern Illinois and winter weather advisories taking effect in areas to the south of the Chicago area.

According to current forecast models, the snow is expected to spread into the Chicago area around 5 p.m., and will become moderate-to-heavy at times.

Areas south of Chicago can expect to see some snow, along with a light, icy precipitation mix, with up to one-tenth of an inch of ice possible in some locations, including Kankakee County.

The big issue with the storm in all areas will be the wind, which will cause limited visibility and hazardous driving conditions. The wind off of Lake Michigan could also cause lake enhancement of the snow, hitting Lake and Cook counties hard.

The snow and precipitation are expected to abate overnight in southern counties, but will likely continue well into Tuesday in Chicago and areas closer to Lake Michigan.

For a fuller picture of the timeline, please visit the NBC Chicago app. 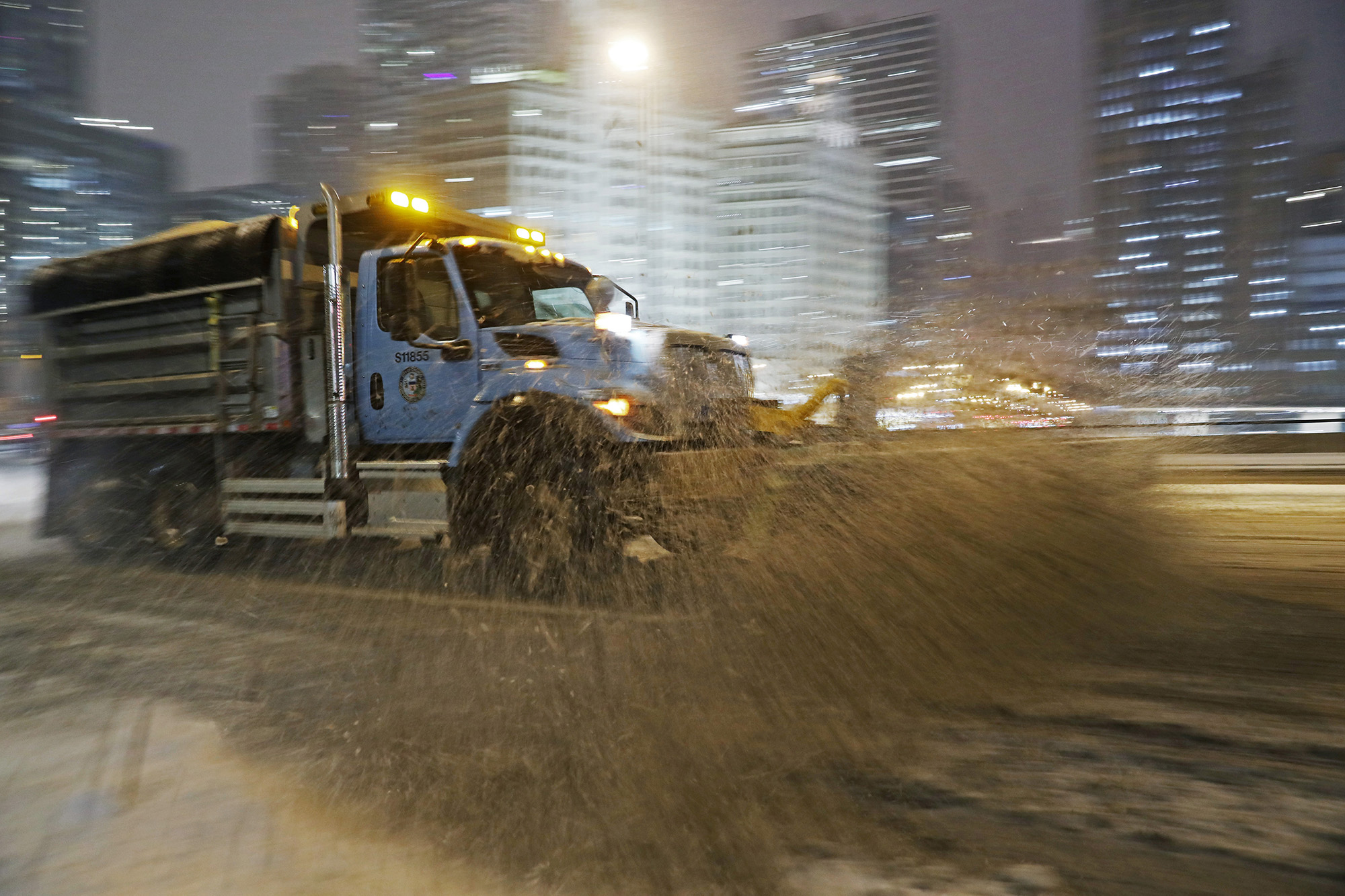