The Chicago area woke up to a blast of winter weather on Wednesday with snowfall blanketing the area and chilly temperatures in store. But how long will the winter weather last? The short answer is: Get cozy for the next few days.

The Chicago area was under a Winter Weather Advisory through 10 a.m. Wednesday, as snow continued to fall across the area. That left roads icy and slick, causing dozens of crashes including a nearly 60-car chain of pile-up collisions on the inbound Kennedy Expressway at around 5 a.m.

Video shows the scene where nearly 60 cars were involved in a massive pile-up on the Kennedy Expressway during snow in Chicago.

The snow was expected to continue tapering off through the morning, leaving 1 to 2 inches of accumulation behind as clouds break for more sunshine. But a mix of sun and clouds in the afternoon could also see a few light lake effect snow showers and a lake breeze, with high temperatures in the upper 30s to low 40s.

Temperatures drop into the mid 20s inland and low 30s in the city Wednesday night, with clear to partly cloudy conditions.

Thursday looks to be mostly sunny and cold in the morning before clouds increase and skies turn overcast in the afternoon. Highs reach the 40s, with rain expected to develop in the evening, later mixing with snow. That snow will likely stay steady overnight, though the storm is developing and conditions may change, so monitor the forecast for updates. 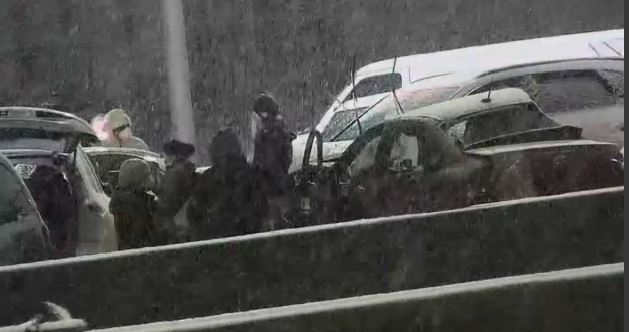 The steady snow is expected to continue in the morning before tapering off, with initial projections showing about an inch of accumulation far north to between 5 and 6 inches in far southern counties. Clouds break for partial sun in the afternoon but temperatures will still be on the cool side with highs in the low 40s north and upper 40s south.