Chicago emergency officials urged residents to prepare for the winter snowstorm expected to head into the area within hours Saturday.

The Office of Emergency Management and Communications and the Department of Streets and Sanitation held a press conference Saturday at 11:30 a.m. to give warning of the winter storm expected.

The OEMC warned of a winter storm warning to take place across the Chicago area Saturday into Sunday, with heavy periods of snowfall. Officials said people should check in with family members and encouraged residents to call 311 to request a wellness check.

A Lakeshore Flood Advisory is also in effect, the OEMC announced, as of 9 a.m. Saturday and will remain active until Monday at 3 p.m. Emergency officials said there could be "minor flooding" along the Lake Shore Drive bike path. 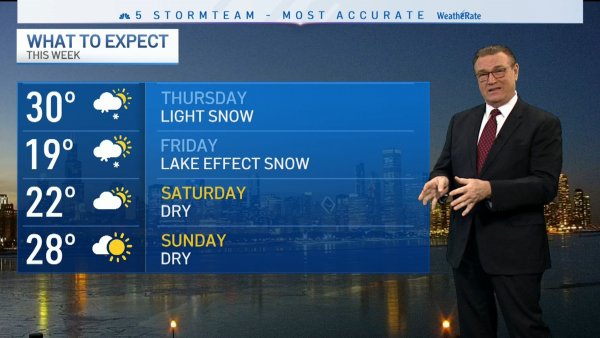 On Friday, the Illinois Emergency Management Agency urged people in a release to take time before the major anticipated snowfall to prepare families, homes and vehicles for a storm.

“This weekend, if weather impacts your area, please take a moment to check on your neighbors,” IEMA Director Alicia Tate-Nadeau said. “46% of individuals expect to rely a great deal on people in their neighborhood for assistance within the first 72 hours after a disaster. Send a text or make a call to ensure they have everything they need to survive this winter storm.”

The IEMA recommended that residents do the following to prepare:

According to the NBC 5 Storm Team, snow will develop later in the afternoon. It may start as an icy mix initially then become steady heavy snow in the evening.