It had to be José Abreu. 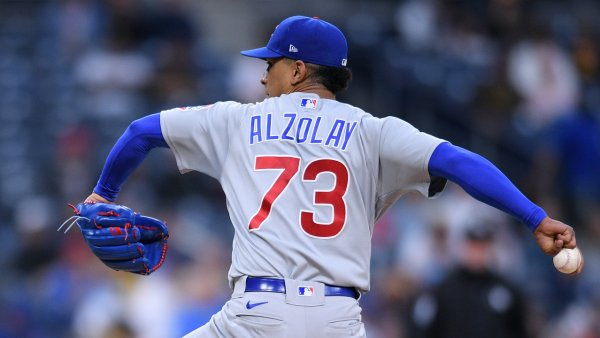 It's a play like that that makes you believe in the oft-invoked baseball gods.

Abreu, still sporting bandages on his face from Friday's nasty-looking collision, stood at third base in the bottom of the ninth of a tie game — actually, he had a hefty lead — and waited.

"He knows, 'If I can score, we win,'" White Sox manager Tony La Russa said. "Ball in the dirt, and he reacts instinctively. He’s thinking, 'Win, win, win.'"

All thanks to the MVP.

"You don't see too many first baseman his size, when a (wild pitch) doesn't get to the grass (behind home plate), and he's ready to go," White Sox right fielder Adam Eaton said. "He's thinking the game, he's on top of it, he's not going to let a moment pass.

"I didn't need to see it to know what type of guy he was, but it kind of reiterates the ballplayer he is."

Not that anyone in the scope of South Side baseball had any doubts, but if there was a weekend where Abreu reinforced the "valuable" in his Most Valuable Player Award for all to see, this was it.

Friday's collision in the first game of a doubleheader was scary. La Russa, who's taken in as much Major League Baseball as just about anyone on the planet, said he never heard — that's right, heard — anything like it. Abreu, coming in to make a play on a pop up, slammed into Hunter Dozier, making his way toward first base. The two stayed on the ground for a good amount of time. Dozier, it turned out, was concussed. Abreu was not, but he still wobbled his way off the field with assistance.

The fear was that he was heading to the injured list to join Eloy Jiménez and Luis Robert, the White Sox down not one, not two but suddenly three of their most important hitters. And none of them are more important than Abreu.

But in the moments that followed, he showed exactly why that's the case, not through a big hit or yet another RBI — those came later — but by being himself, by being the leader this team cherishes so much. He said he could keep playing, laughable considering his bruised knee wasn't allowing him to walk properly. He said he wanted to play the second game of the doubleheader. He insisted on playing Saturday.

La Russa said he didn't think there was a chance Abreu would be ready to go after going through what he went through Friday. But there was Abreu, batting cleanup and playing first base. He got the all-clear from the training staff and took the field — not that there might have been any stopping him, knowing how much he loathes days off. His dedication is a constant talking point, the example he sets on a daily basis with his work ethic. Here it was in all its glory.

Oh, and he homered. Because of course he did.

Then Sunday. After what happened the previous two days, it had to be him to stand 90 feet away from a victory after his locker buddy Yoán Moncada blew through Joe McEwing's stop sign at third base, thrown out at home a play earlier. Abreu, to borrow a phrase from La Russa, played the scoreboard, knowing the White Sox needed just one run. His lead was ample, his instincts on point, and somehow, he was safe.

The ebullience in the home dugout said it all. This wasn't just a White Sox winner. This was an Abreu winner. And those guys love them some Abreu.

"He raises everybody up," Eaton said. "A guy like that, that has won MVP and has the accolades that he has, he's going out there every single day, he's putting the effort and the love into the game. Who are you to not do that?

"It raises the guys that are younger, that are trying to feel their way through the game. Guys in the middle and the older guys too, it brings everybody up. It brings everybody on that playing field (up) and makes everybody better. You see that and it's contagious. And if it's not contagious, you kind of stick out like a sore thumb.

"He's a beautiful guy to have on the team."

The biggest smiles, the biggest hugs, weren't necessarily limited to Abreu's group of mentees, though that group is basically just down to Moncada with Jiménez and Robert on the shelf. It was Andrew Vaughn wrapping his arms around Abreu in the dugout. It was Billy Hamilton leaping over the railing. It was Lucas Giolito with the same look on his face he had when he threw that no-hitter last summer.

The verbal praise for Abreu comes so fast and so frequently that it can somehow be lost just what he means inside that clubhouse. Sunday's walk-off base-running special provided some visual evidence to go along with all the talk.

"This guy, he’s a great player," La Russa said. "I was saying yesterday about his toughness. How do you explain how committed he is to playing? What happens the other night, he comes back and plays yesterday and performs. Then you look at this game today, and that’s why he offers you so many examples of his greatness. And the one that nobody sees is what happens in the locker room and the back of the plane.

"What’s the highest compliment I can give him? He stands right next to Albert (Pujols) for me."

A high compliment, indeed, the Hall-of-Fame manager invoking the future Hall of Famer, one of the best players in baseball history — and an Abreu friend.

Like Pujols drove the bus for La Russa's championship St. Louis Cardinals clubs, Abreu sets the bar for this White Sox team, a team by the way that's sitting in first place in the AL Central and chasing a World Series championship of its own.

Abreu showed this weekend how they can meet their sky-high expectations, by following his lead.

"He raises the bar everywhere," Eaton said. "It’s a ripple effect, it really is. ... He’s the same guy every single day coming in here. He’s banged up, still playing through it.

"There’s a standard here, and he is the standard. If you don’t meet that standard, you’re going to glare. That’s a beautiful thing. Everyone’s got to get up to that standard and play at a high intensity."