Opening kickoff of the 2021 NFL season is just days away.

The Dallas Cowboys and defending Super Bowl champion Tampa Bay Buccaneers will start things off Thursday night on NBC. The Week 1 action continues Sunday with a 14-game slate followed by the Baltimore Ravens against the Las Vegas Raiders on Monday Night Football. 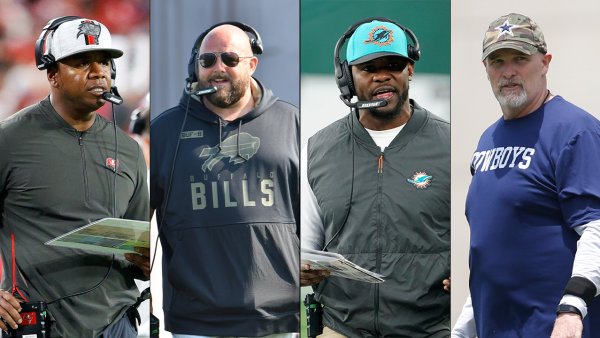 With all 32 teams set to embark on the league’s inaugural 17-game season, which ones will be able to surpass their projected win total? And who will fall short?

Here are the eight best over/under win total bets, with odds provided by our partner, PointsBet.

The Houston Texans could be 17 games away from being on the clock for the 2022 NFL Draft. Houston went 4-12 last season, and that was with Deshaun Watson playing every game. While he’s on the active roster, it seems like Watson has played his last down as a Texan. The fifth-year QB is currently being investigated by the NFL due to the 22 civil lawsuits and 10 criminal complaints of alleged sexual misconduct that he’s facing. If he suits up at all in 2021, he’ll likely do so in a different uniform.

That leaves veteran Tyrod Taylor as the starter with a lackluster group of weapons at his disposal. Considering an already-below-average Texans defense lost J.J. Watt, it’s easy to see Houston struggling to stay in a lot of games. They probably need to win all three of their combined meetings against the Jacksonville Jaguars and New York Jets to have a chance at the over. And even that seems like a tall task for this team. Advice to Texans fans: Watch three hours worth of quarterback prospect highlights on Sundays instead.

The Detroit Lions won five games last season, but it’s difficult to see them reaching that total in 2021. They downgraded from Matthew Stafford to Jared Goff at quarterback, lost Kenny Golladay and Marvin Jones Jr. in free agency and didn’t make substantial upgrades to a defense that surrendered the most yards per game and points per game in 2020. Goff has D’Andre Swift, T.J. Hockenson and a strong offensive line around him, but also what might be the worst group of receivers in the NFL.

Combine all that with the fact that the Lions are tied for the sixth-hardest strength of schedule based on 2020 records, and this has the makings of a rough first season for head coach Dan Campbell.

The NFC East hasn’t had a repeat champion since the Philadelphia Eagles in 2003 and 2004. There’s a good chance that streak comes to an end in 2021. The Washington Football Team only needed seven wins to claim the division crown last season. They did so with Dwayne Haskins, Kyle Allen, Alex Smith and Taylor Heinicke playing quarterback. In the playoffs, Heinicke and Washington even put up a strong fight against the eventual Super Bowl champs.

The Football Team upgraded from all of their 2020 signal callers by signing Ryan Fitzpatrick. Fitzpatrick is by no means a star, but Washington doesn’t need him to be. With an elite defense, Fitzpatrick just has to spark an offense that ranked in the bottom eight in yards per game and points per game last season. He showed he had the ability to do that at age 38 last year with the Miami Dolphins.

The NFC East won’t be as bad as the trainwreck that it was in 2020 and Washington’s out-of-division slate features matchups against six 2020 playoff teams. But the addition of Fitzpatrick to a Ron Rivera-coached team with a dominant defense makes me optimistic they can finish above .500.

The Carson Wentz era in Indianapolis has gotten off to a rocky start. The former No. 2 overall pick suffered a foot injury early in training camp that required surgery, and his return to practice was delayed after landing on the reserve/COVID-19 list. Having trouble staying on the field isn’t anything new for Wentz. The only seasons he’s finished healthy were in 2016 and 2020 -- and in the latter he was benched due to his atrocious play.

The Colts won 11 games with Philip Rivers under center last year, and reaching double-digit victories in 2021 will not only require Wentz staying healthy, but bouncing back in a big way. And if Wentz can’t stay healthy or continues to perform like one of the league's worst quarterbacks, Indy has 2020 fourth-round pick Jacob Eason, rookie Sam Ehlinger (injured reserve) and Brett Hundley (practice squad) as backup options.

The Colts have a good head coach and roster, but the quarterback position has real potential to hold them back. Despite five combined games against the Texans, Jaguars and Jets, I don't have much faith in Wentz to lead this team to 10 wins after what happened last season.

Sticking in the AFC South, the Tennessee Titans won the division last season at 11-5 thanks to a bruising rushing attack led by Derrick Henry. They averaged 168.1 yards per game on the ground, second-best in the NFL, while putting up over 30 points per game. The Titans were a bottom-10 passing offense but could have a more balanced attack in 2021 with the addition of future Hall of Famer Julio Jones. Tennessee also landed Bud Dupree, Denico Autry and Janoris Jenkins in an effort to bolster a defense that gave up 27.4 points per game.

The Titans went 5-1 in the division last year, and they should be able to match that mark in 2021, or better yet go undefeated. That alone would get them at least halfway to 10 victories. The remaining schedule is far from a walk in the park, with battles against the San Francisco 49ers, Seattle Seahawks, Buffalo Bills, Kansas City Chiefs, Pittsburgh Steelers and Los Angeles Rams. But this Titans team is good enough to find a way to double-digit wins.

While there was some drama this offseason, all Russell Wilson and head coach Pete Carroll have done together is rack up wins. Since Wilson became the starter, the Seahawks have won at least 10 games in eight of nine seasons. They’ve won at least 11 games five times, including the last two seasons. The one year Seattle failed to reach double-digit victories? They won nine games.

The Seahawks are coming off a 12-win campaign that ended with an ugly playoff loss to the Rams. It capped a season that was a tale of two halves for Wilson and Seattle’s offense, who dropped off after a red-hot start. Former Rams passing coordinator Shane Waldron has come aboard as offensive coordinator, and there’s hope he can help revitalize that unit.

The Seahawks lost a few key players on the other side of the ball, with K.J. Wright and Shaquill Griffin among the departures. They also play in what looks to be the best division in football and have several tough out-of-division games. Still, it’s hard not to just believe in Wilson and Carroll’s impressive track record here.

For most of the offseason, it appeared Aaron Rodgers’ time in Green Bay was over. But Rodgers wound up agreeing to a restructured deal that will keep him in a Packers uniform for at least one more year. With questions about the reigning MVP’s future temporarily put aside, Green Bay now eyes a Super Bowl run after losing in the last two NFC Championship Games.

While Rodgers, Matt LaFleur and Co. have fallen short of a Super Bowl appearance, they have been a dominant regular-season team, recording 13 victories in each of the previous two seasons. Green Bay lost All-Pro center Corey Linsley in free agency but is returning most of the starters from last year’s squad.

Just like the aforementioned Titans, the Packers should roll through their division. The rest of the schedule includes showdowns against the Seahawks, Chiefs, 49ers, Steelers and Cleveland Browns. But even if Rodgers takes a step back from his MVP form, it’d be surprising if his potential farewell tour as a Packer resulted in 10 or fewer wins.

There’s not much to say here other than the Chiefs have Patrick Mahomes and are very, very good. K.C. has won at least 12 games in each of the three seasons since handing the reins over to Mahomes, making two trips to the Super Bowl. They have an .822 regular-season winning percentage (37-8) when Mahomes starts during that span. That winning percentage would equate to 13.9 wins over a 17-game schedule.

The Chiefs revamped their offensive line in the offseason, signing guard Joe Thuney, trading for left tackle Orlando Brown Jr. and drafting center Creed Humphrey in the second round. With an improved front for Mahomes, Kansas City sets out on a redemption tour following a disappointing Super Bowl LV loss to the Bucs.

While there are no pushovers in the AFC West, the Chiefs are still head and shoulders above the rest of the division. Their schedule does include matchups against the Ravens, Packers, Browns, Titans, Steelers and Buffalo Bills. But that doesn’t seem all that daunting when you have the best player in football on your side.