In just the last two games, Justin Fields has thrown three interceptions on downfield passes intended for Allen Robinson and had another one nearly picked off in the end zone because the defender didn’t get his feet inbounds.

Naturally, a big conversation this week has been about the chemistry that seems to be lacking between the rookie quarterback and the Bears’ No. 1 wide receiver. 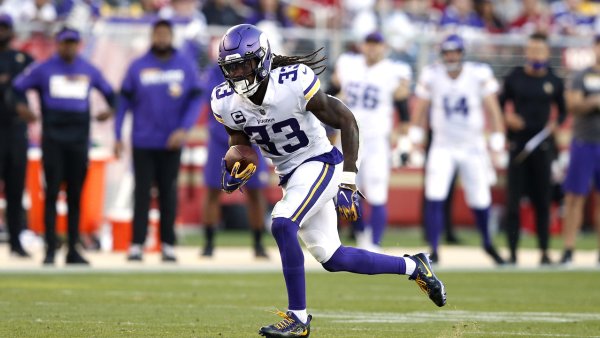 “There weren’t many snaps we took throughout training camp and stuff like that,” Robinson said, referencing the Bears’ questionable plan to have Andy Dalton take nearly all the reps with the starters in training camp. There were some exceptions, but the amount of targets between Fields and Robinson in training camp can probably be counted on one hand — two hands tops.

“We have solid chemistry,” Fields said Wednesday. “We, of course, need to get better. It’s not the best in the country, of course, but we’re growing each and every day, so I mean, me, him and some other receivers are going to start meeting on Zoom by ourselves and kind of start getting our own thing together.”

That revelation from Fields was interesting because it points to a positive, decisive initiative every NFL team wants their starting quarterback to show, but it also raises more questions about the offensive scheme. Fields said he’ll meet with the wide receivers “as much as needed” and specifically mentioned “maybe changing the routes on certain plays or something like that.”

Whatever it takes. It’s obvious Fields hasn’t been on the same page with Robinson and, in general, his pass catchers haven’t helped him out enough. Fields made mistakes on all three interceptions against the Buccaneers Sunday, but it’s not like all the blame went on the quarterback. Let’s take a look:

This play was just a disaster from start to finish. After offensive coordinator Bill Lazor told Fields in his headset that he might be able to catch the Bucs with 12 men on the field, the quarterback rushed to snap the ball at the line scrimmage. At the point of the snap, the following were all true:

It was a mess. First, Fields looked left to throw to Goodwin, who, again, did not know the play. Once Fields pulled the ball down, he had to spin out of a sack because right tackle Lachavious Simmons was left singled on Jason Pierre-Paul and got beat on a spin move. Not throwing the pass and avoiding the sack were two things Fields did well on this play.

But then the scramble drill started and this has been something the Bears have been struggling with.

That defender is circled in red below. Robinson is circled in yellow. Herbert is actually the deepest receiver and his defender peels off him to make the interception after Fields tries to throw the ball over Robinson’s opposite shoulder.

“I actually didn't think he threw it to me because as I'm rolling he wasn't really looking at me, he looked like he was looking further downfield and then once I saw the ball thrown I just tried to turn back and make a play,” Robinson.

Robinson fell down trying to turn around and the ball was picked off.

This one is a lot easier to break down. Fields had time to throw, but his pass to Darnell Mooney on the short comeback route was just a touch too high and fast. That said, it hit Mooney in the hands and he needs to make the play.

Throws like that are going to happen for any quarterback regardless of their experience. That's not excusing Fields, but receivers also get paid to help their quarterback look good.

At first glance, this just looks like a go-route that is severely under thrown. But even when watching live from the press box at Raymond James Stadium, I could tell that this was more than just an under thrown pass. Fields and Robinson did not look like they were on the same page.

“Yeah, so on that one it's off-coverage. I'm running a go-ball,” Robinson said. "The defender was at about like 10 yards or so.”

Often times, the coverage can dictate the ball placement, and Matt Nagy confirmed that his players weren’t on the same page.

“Sometimes that's gonna be one where you throw it up and A-Rob's gonna kind of like jump over top of him, make a great catch,” Nagy said. “Or the guy's pressed and normally is downfield more, and that one was the one that was a little gray. When those two guys get together and start watching that exact situation -- that play and that route versus that defense -- they'll fix that and they'll be able to make sure that that doesn't happen. In worst case, it would be an incompletion.”

In this case, Robinson had no chance to knock the ball down and it was picked off by Pierre Desir.

“As I close the cushion to him and then I get a step on him, I'm still digging for the go ball. You know what I'm saying? So then once I look back, the ball was in the air, I tried to slam on the brakes and maybe come back but at that point in time it was too late for me,” Robinson said.

It’s almost as if Fields was trying a back-shoulder throw, which can work against either press or off-coverage when the receiver drives the defender downfield.

Just another example of how/why Fields needs to get on the same page as his receivers.

“That’s probably some of the stuff that we're going through, that we need to make sure, 'OK, hey, are we doing everything we can as coaches and are they doing everything they can as players?,'" Nagy said. "And that's where we've got to say, 'OK, is it best for us to do that, or we gotta try something else?’”

Based on these new Zoom meetings between the quarterback and wide receivers, it sounds like Fields is taking matters into his own hands. And it sounds like they’re going to try something else.

Mooney described the meetings like this: “Watching the game together and seeing things on the other opponent, something that we can pick on and maybe audible and get a key on what they’re doing in the game. And then when we get in the game … we get a play where we know what’s going on and try to audible off what they’re doing.”

The best offenses in the NFL work when the quarterback has the ability to scan the opposing defense at the line of scrimmage and check/change a route/assignment if necessary to create an advantage.

Perhaps Fields is too inexperienced to do that. Or perhaps he is, and he’s not being given the freedom to do so.

Either way, it sounds like that’s changing this week.

(As always, for more detail on the grading system, click here.)

— Justin Fields has two negative grades on the season — against the Browns and against the Bucs. As a whole, his season grade is 2.00, which is just on the fringe of starting caliber.

— It almost doesn’t seem fair to put Lachavious Simmons on here given that he wasn’t put in a very good position to succeed. He found out he was starting at right tackle just a few hours before the game and Jason Peters revealed that Simmons didn’t get any reps at right tackle during the week. That said, part of the job is being ready to go and performing when you get your opportunity. Simmons was consistently beat in 1-on-1 situations and was eventually benched after allowing the second of two strip-sacks on his quarterback.

— The right tackle position has been a huge problem for the Bears, but Elijah Wilkinson (2.67) provided a significant upgrade over Germain Ifedi (-0.43) before landing on the COVID-19 list. Rookie Larry Borom returned to practice Wednesday and if he’s ready to play by Sunday, there’s a decent chance he’ll start at right tackle. If that happens, Wilkinson could join running back Damien Williams as unvaccinated players who had some success filling in for injured starters, but then lost playing time to a rookie after ending up on the COVID-19 list. Williams shared the backfield with rookie running back Khalil Herbert after David Montgomery got hurt, but after Williams missed the Packers game because of COVID-19, Herbert took over as the clear lead-back.