Green Bay Packers quarterback Aaron Rodgers made his second appearance on the “The Pat McAfee Show” in the last five days on Tuesday and said it would be his final stint on the show where he discusses his vaccination status.

The Green Bay Packers lost their last game against the Kansas City Chiefs on Sunday without Rodgers, with the QB sidelined after he tested positive with COVID-19 on Nov. 3. 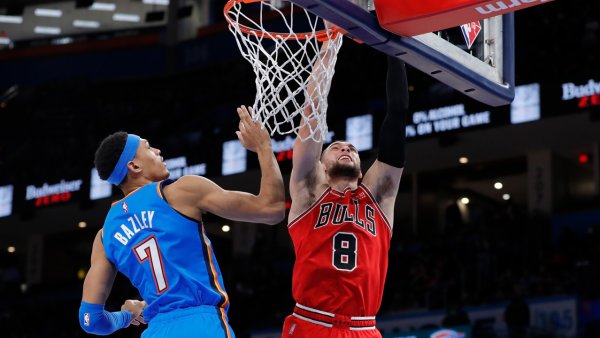 10 Observations: Bulls Hang on for Needed Win Over Thunder

Rodgers, who is unvaccinated, talked a little about backup quarterback Jordan Love’s first career start with McAfee but primarily was asked about criticism and reaction to his Nov. 5 appearance on the show.

"I made some comments that people might have felt were misleading," Rodgers expressed on the show.

"I take full responsibility for those comments … I have a ton of empathy for people going through pandemic, lives lost and the lives forever changed," he said.

Aaron Rodgers on The Pat McAfee Show: "I made some comments that people might've felt are misleading. To anybody who felt misled by those comments, I take full responsibility for those comments."

The conversation did turn ahead to the Packers' upcoming game against the Seattle Seahawks and how Rodgers plans to be under center for Green Bay on Sunday.

"I'm an athlete, I'm not an activist, and I'm going to get back to doing what I do best, and that's playing ball," Rodgers said, wearing a "Star Wars: The Rise of Skywalker" T-shirt.

Back on the @PatMcAfeeShow, #Packers QB Aaron Rodgers says these will be his final public comments on the vaccination issue.

"I'm an athlete, I'm not activist, and I'm going to get back to doing what I do best, and that's playing ball."

During the interview, he also apologized for some of the things he said last week but ultimately said that he “respects everybody’s opinion.”

Rodgers stated that he "just shared his point of view, and now he’s being crucified for it."

At times, the QB said he felt he "definitely was tested," but the Packers organization has been supportive through this ordeal.

"Hardest part is being away from those guys,” Rodgers said about his Green Bay teammates.

The Packers signal caller has realized that everything that he said on the show rubbed the NFL community the wrong way. Many fans expressed their disappointment and media members around the league also showed that they didn't agree with Rodgers' comments.

Rodgers seemed committed to staying clear of future controversy surrounding the NFL’s COVID-19 protocols and said that playing football for the Packers is his primary focus.

“Further comments I’m going to keep between myself and my doctors,” he said