Because I'm a miserable person, I could easily sit here anc point out and rant and rave about the Hawks turning off the ignition in the 3rd. But I'm not going to, nor do I feel I should. This was the 5th game in seven nights, on the road against the other hottest team in hockey. There were going to be passages of play that got away from the Hawks, so whatever. It's Saturday night, the Hawks have righted themselves, so why don't we just feel good? Awesome, thanks for coming with me on this.

-You know, if he really works hard and puts the time in, and a few bounces go his way, this Jonathan Toews has an excellent chance to be a useful player one day.

Oilers vs Blackhawks 1 hour ago 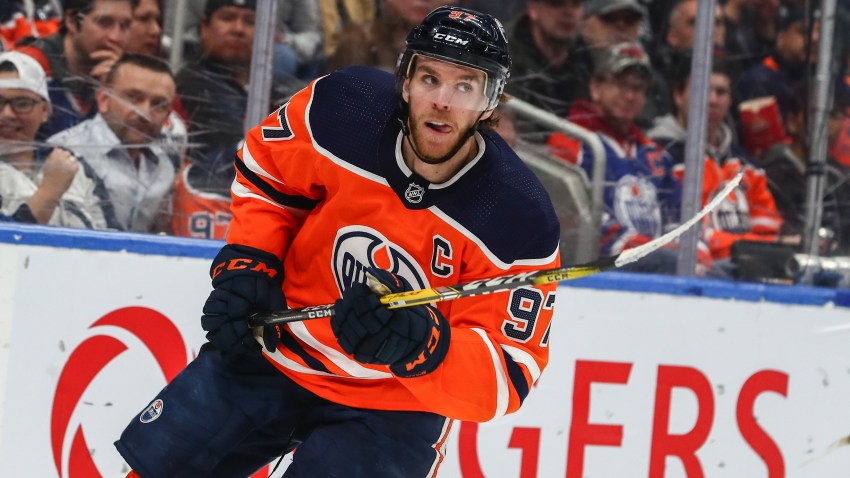 Oilers vs Blackhawks 20 hours ago

-The Hawks got goals from all four lines tonight, and when they do that no one is going to beat them. And yes, I realize that this means that they've scored four goals at least and they should win anyway, but you get what I'm trying to say. Or maybe you don't, but again, we should be in a good mood so I'm not going to quibble.

-Happy to see Viktor Stalberg get one in his return to Toronto. Though Leafs fans were excited to get Kris Versteeg, a lot of them told us they liked Vik and hoped he would do well. After an iffy middle part of the season Vik has really settled into a nice role on the 4th line, using his speed on the outside and finally taking advantage of that 6-4 frame. He won't be the 20-goal guy I thought he could be, at least not this year, but he's helping the team a lot and is just as big of a factor as Ryan Johnson as to why the Hawks can roll four lines right now.

-A lot of people at Second City Hockey.com have accused me of waging an unfair war against Nick Leddy. I don't blame Leddy for losses or anything like that, and he's been put in an impossible position. He's not ready to be a full-time NHL'er, and yet he's here and being counted on for big minutes. It's not his fault. And after a great 1st period, he had two woeful mistakes, one that led to a goal and one that led to a penalty shot that could have made this game pretty hairy. Though Leddy continues to grow every game, and his good patches get better, his mistakes that he should be making in the AHL or college or junior are still there. When April rolls around and he's still being counted on for minutes and the opponent is targeting him with weapons that can hurt you, those mistakes can be fatal. And it again won't be his fault.

-The penalty kill went 5-for-5. The last time that happened I think Nixon was in the White House, or at least that's how it feels.

-When the Hawks stay in straight lines as they did tonight, few can stick with them. When they deny their own blue line as well as they did, that list gets shorter as well.

-Pat Foley is the soundtrack to most of my childhood. So the fact that he's turning into a hockey version of Hawk Harrelson disappoints me greatly, with endless pontificating on this feel good story or this guys poise or whatever it is that goes on for enough time to miss half a period of action. What's really galling is that if you heard his call of the Wings and Wild on NBC a couple weeks back, it was old Foley. Immaculate. Has he discovered yet that the fourth Hawks goal was changed to Stalberg? I don't know why this is, I wish it would stop.