The Rodeo Comes To Philly

Well, it was always going to be a tasty affair, wasn't it? Just didn't see that one coming.

In a game that featured defending that would make a Mites coach laugh, or possibly cry, the Hawks did just enough to have their hearts broken. It's the same story about this team's flaws that we've talked about all year. Their special teams will let them down, they have major problems with teams that have size at forward, they can get knocked around too easily. This game also demonstrated why the Hawks are still among the contenders in the league, that is superior offensive talent, a pretty sizable heart, guts, or something lower if you like that means they're almost never beaten, and the ability to score in spurts. Thankfully, the latter is more permanent than the former flaws, as those can be easily fixed.

The Flyers had far too easy of a time pinning NIck Leddy and Nklas Hjalmarsson down when getitng the puck behind them. Both of them are afraid to engage physically and constantly turned the puck over. When scrambles began off of rebounds from Ray Emery, they both looked on as a poet might look on to the downfall of society. Instead of helping they just wondered how we ever got to this point. It's been a familiar refrain. It didn't help that all the Flyers goals stemmed from moving Ray Emery side-to-side, which he doesn't do well. But when faced with 46 shots, there was only so much he was going to do.

Quest for the Cup Aug 10 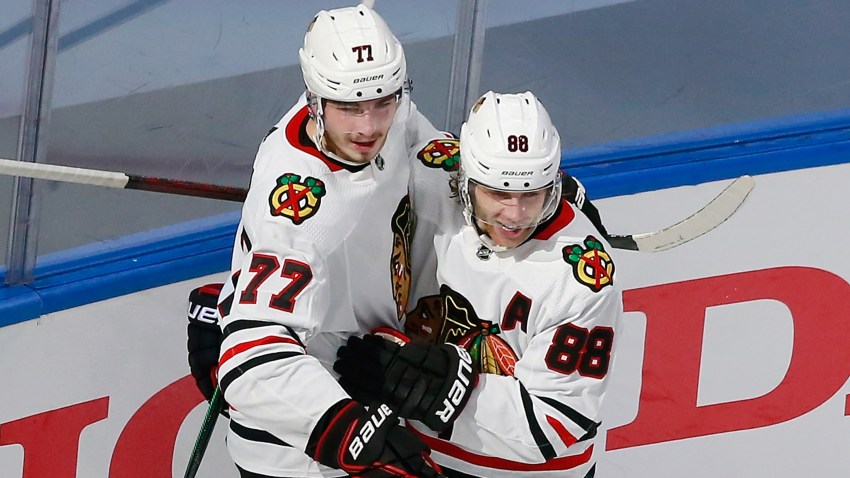 Again, the penalty kill let the Hawks down, in the most gut-wrenching fashion. With 30 seconds to go, Jamal Mayers decided it was ok to let the league's leading scorer in Claude Giroux paint a portrait of the scene at the blue line instead of attacking him while the Flyers were changing and had one other guy on the ice. He found Scott Hartnell, who found a streaking James Van Riemsdyk coming from the bench. Curtains. Another mistake on a facet of the game the Hawks can't get right.

There were plaudits, and rightly so, for kids Andrew Shaw and Jimmy Hayes. Both showed no fear at this level. Especially Shaw, whose size will probably turn him into goo by February if he's still here. Only one game, but we wouldn't blame anyone who'd like to see a few more from them.

The Hawks biff another test against one of the league's elite, but proved why they're one as well. It's a mini-skid, and they'll get the chance to stop it right there again tonight. But the warts need solving, and soon.