Chicago Blackhawks Shut Out in Edmonton for 4th Straight Loss

Mikko Koskinen made 40 saves for the Oilers

Mikko Koskinen is off to a nice start in his return to the NHL, as he made 40 saves for his first career shutout, Drake Caggiula scored twice and the Edmonton Oilers beat the Chicago Blackhawks 4-0 on Thursday night.

The 30-year-old Koskinen became the sixth goaltender in franchise history to record at least 40 saves in a shutout performance. Not bad for a player whose previous NHL experience consisted of four games for the New York Islanders during the 2010-2011 season.

After playing primarily in the KHL, Koskinen signed with Edmonton as a free agent this summer. He earned a 5-3 victory in Nashville last Saturday in his only other appearance while backing up Cam Talbot.

"He was outstanding," Oilers forward Leon Draisaitl said. "That is what good goalies do. He hasn't played much, but he was able to stay confident. It's pretty impressive to see him come out with two performances like that." 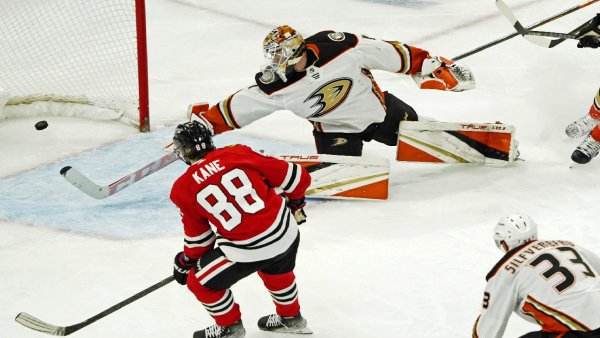 Koskinen said he always wanted to come back to the NHL and prove himself.

"It was always on my mind," the 6-foot-7 goaltender said. "I had opportunities, like, three, four years ago, but I always decided to stay. I thought I could still get better there (in St. Petersburg), and my setup there was great.

"But I always had it in my sight, to come back and try to be a goalie here."

Jason Garrison and Alex Chiasson also scored for the Oilers (7-4-1), who have won four of five.

"I don't know if the frustration level is high," Chicago captain Jonathan Toews said. "At the end of day, though it doesn't look good on the scoreboard.

"But for the most part, we're involved and we're in the game giving ourselves a chance to win for the majority of 60 minutes."

Koskinen made 15 saves during a scoreless first period and Edmonton jumped in front 18 seconds into the second. Caggiula showed some deft hands in front, spinning around and then shoveling home his third of the season while being knocked to his knees from behind.

Koskinen made some exceptional stops to keep Edmonton in front, denying Toews on a short-handed breakaway with six minutes left in the middle period, and then Alex DeBrincat in tight later on during the same sloppy Oilers power play.

Edmonton went up 2-0 with 37 seconds left in the second. Garrison scored on the power play for his first goal with the Oilers.

Edmonton added to its lead with a short-handed tally in the third. Jujhar Khaira did a good job to get it to Caggiula, who froze Ward on a deke before scoring at 6:49.

Edmonton got another midway through the third when Chiasson scored his fifth goal in his last six games.