Representing the Chicago Bears to announce the club’s selection in the first round of the 2021 NFL Draft was Carlos Nelson, the CEO of the Greater Auburn-Gresham Development Corporation. When he visualized walking to the podium in Cleveland that night, he thought it would be to announce the 20th overall pick. 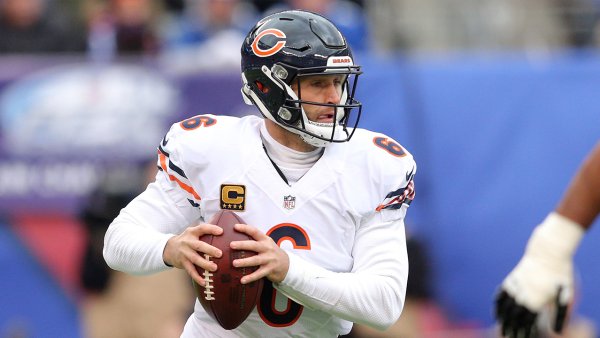 So, he sat down backstage and patiently waited to be called a few hours into the evening.

However, as the draft started to unfold and Fields slid down the draft board, Bears general manager Ryan Pace was working behind the scenes to move up to select Ohio State quarterback Justin Fields. Both Pace and Bears head coach Matt Nagy identified Fields as the man to end the Bears' decades-long drought at the most important position in professional sports.

Pace made trade offers to the Carolina Panthers, the Denver Broncos, the Dallas Cowboys and the New York Giants, who owned picks No. 8, 9 , 10 and No. 11 respectively. The first three teams rebuffed Pace but all three passed on Fields, despite Carolina and Denver having some level of uncertainty at the QB position.

There was some concern when Dallas traded their pick to the Philadelphia Eagles who had been at No. 12, but Philadelphia had fallen in love with Alabama’s Heisman Trophy winning wide receiver DeVonta Smith.

That opened the doors for Giants GM Dave Gettleman to field trade offers for his No. 11 pick and Pace pounced.

Pace swung a deal that gave him a do over for the biggest mistake of his career, trading up to draft Mitchell Trubisky in 2017 over Deshaun Watson and Patrick Mahomes.

When the trade with the Giants was announced the Bears fan base was on the edge of their seats. Would the Bears actually be getting another shot at a franchise quarterback? Would they choose Fields or Alabama’s Mac Jones who began the night thinking he might go as high as No. 3 to the San Francisco 49ers but was still on the board.

Nelson was unaware a trade was going down when he heard NFL officials yelling his name and rushing him towards the podium.

“The Bears have just traded for the 11th pick and they are taking Justin Fields," he was told. We have to go right now.”

Carlos Nelson, @c_gagdc, joined @kapjhood to talk about what it was like when he got to announce that the @ChicagoBears had traded up to pick @justnfields. For the full interview: https://t.co/sxmogifWvy pic.twitter.com/YRVR6w9dHy

“They shoved this card into my hand and I lost all consciousness," Nelson told me and Jonathan Hood on our ESPN 1000 Kap and J-Hood morning radio show. "I was no longer there to represent the Bears and my organization, I was a Da Bears fan.”

So with that backdrop I decided to look at the last time the city of Chicago got that excited over one of their sports teams. It was easy to remember the biggest moment of the last 5 years. That Nov. 2, 2016 night in the same city that this draft was being held. Cleveland, Ohio, the place where the Chicago Cubs defeated the Cleveland Indians in one of the great Game 7’s in sports history.

The Blackhawks? They haven’t made the playoffs since 2016. Nope, they didn’t belong in the discussion. The Chicago Bulls? They made the playoffs in 2017 but lost 4-2 in the first round after leading their series with the Boston Celtics 2-0. Nope. That definitely wasn’t making the cut.

How about the Chicago Cubs who went to the playoffs in 2017, 2018 and 2020. Were they the correct choice? No for a myriad of reasons. The fan base saw the Cubs championship window start to close and while that was happening the club’s front office parted ways with World Series winning manager Joe Maddon amid speculation that the two sides had philosophical differences. Nope, despite some great moments after the World Series run it just didn’t ignite the city as many had thought it would.

Even the 2020 pandemic shortened 60 game MLB season which saw the Cubs and the White Sox both make the playoffs didn’t fire everyone in Chicago up to a fever pitch. Fans weren’t allowed in ballparks and neither team had the look of a champion. Cross another possible choice off of the list.

That narrowed my list down to three other possibilities for the top spot. Chicago is an amazing sports city and there were some solid contenders for the best moment. Both professional and college sports were under consideration.

The trade for then-Oakland Raiders star Khalil Mack in 2018 was tremendous and had Bears fans fired up at the acquisition of a true NFL superstar. However, he was a defensive player and while he came in with impeccable credentials he was joining a team that was still searching for stability at the quarterback position and then Bears signal caller Mitchell Trubisky was a polarizing presence to the Bears massive fan base. Nope. There had to be something bigger.

The Bears made the playoffs in 2018 when the team surprised most of the experts and went 12-4 but that club was still weighed down by the shaky play of Trubisky and at no point did the fan base believe they were looking at a Super Bowl contender. I had bought into the Mitchell Trubisky hype big time. I was very excited when they landed him in the 2018 draft and envisioned him as the franchise quarterback we had long searched for. When the Bears lost in their first playoff game to the Philadelphia Eagles on the infamous “Double Doink” missed field goal to end their season it was a massive disappointment. No shot that this was the most exciting moment since 2016.

All that was left to consider was the surprising run to the Final Four of the 2018 Loyola Ramblers. Yes, it was awesome and cool and much of the city got behind the Ramblers, Sister Jean and their feel good story. But, again no one expected that team to win the national title and no one believed that the Final Four appearance was the dawning of a college basketball dynasty. Again, a great moment but nowhere close to the best since the 2016 World Series.

The Bears, who had a fan base that was somewhere between angry and incredibly apathetic were resigned to another lousy first-round draft pick and a future at quarterback with aging veteran Andy Dalton. Trubisky had moved on to a backup role in Buffalo. And after an 8-8 record and yet another first round exit in the playoffs, there was no real hope that the franchise was headed in the right direction.

Team chairman George McCaskey had a chance to pacify the disgruntled fan base by firing both Pace and Nagy, hitting the reset button. Instead, he elected to stay the course further infuriating Bears Nation.

Then, the 2021 NFL Draft happened. Pace swung big and landed the quarterback that he and his head coach wanted for over a year. Nagy had developed a relationship with Fields and was extremely impressed with his skill set and his aptitude for understanding complex football concepts.

But, would the Bears be able to trade up high enough? The fan base had no real expectation that the Bears could pull it off. And then the deal was struck and Fields was the choice.

Was the announcement that the #Bears had drafted @justnfields the most exciting moment in Chicago sports since the #Cubs won the World Series in 2016?

Not only did they land a standout talent but the franchise had long been questioned for their lack of a Black franchise quarterback. They had passed on both Mahomes and Watson who became far better players than Trubisky and the narrative - fair or unfair - was that the Bears had left two black quarterbacks on the board.

When Fields became a Bear it was an amazing moment. And because it was a quarterback, not a pass rusher or a wide receiver or a linebacker, it registered like a major earthquake on the Richter scale.

And without a doubt it was the most exciting moment in Chicago sports since that incredible night in Cleveland five years earlier. The Bears actually have a QB. If you don’t see that then you don’t understand what this city has been through with their football team for the past several decades.