Blackhawks Earn a B+ at Midterm

It's the midpoint of the second year of the Rocky Wirtz regime, and overall the Chicago Blackhawks are sitting pretty. They're tied for the third most points in the Western Conference, and this team of promising young stars heads to the NHL all-star break with three players (two of which are not yet legal drinking age) on the Western Conference starting line. And just last month, they achieved a franchise record winning streak.

In the called song "Roxanne," Sting instructed her to "put on the red light," which the Hawks have done this season -- although not lately -- thanks to a much-improved special teams unit. Although they've converted a miniscule 4 of their last 42 power play opportunities, they're still tremendously improved on penalty kill and power play conversion percentage from 2007-08.

The Blackhawks are currently among the league's top ten in both categories, and fourth overall in goals per game. Bench boss Joel Quenneville talked about how this team can get back to where they were in December.

"I think we're probably sick and tired of people telling us how good we are instead of how hard we work, and I think that's what's gonna get us out of it," Quenneville said following the last game preceding a long road trip: a 2-0 home loss to the conference cellar-dwelling St. Louis Blues, also the franchise of which he is the all-time leader in coaching victories. Well, I'm done talking about how good the Blackhawks are, for now anyway. With defenseman Duncan Keith out (Coach Q. said he's likely to return after the All-Star break), the Hawks lack of blue-liner depth has been further exposed. Also, forward Patrick Kane hasn't looked himself lately. Captain Jonathan Toews didn't feel like talking up the Hawks. 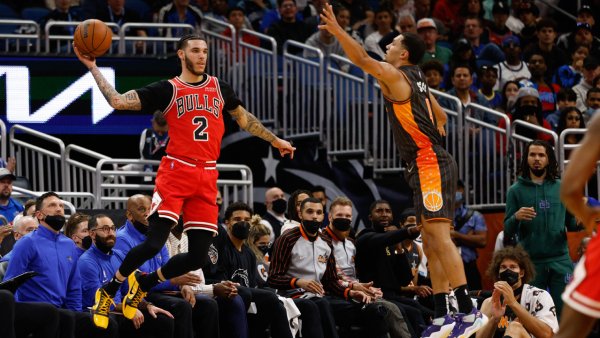 10 Observations: Bulls Get Mojo Back in Bounceback Blowout of Magic

"We have a lot of time to let this crappy feeling sink in right now, so we have a lot of motivation to hopefully come back and play stronger in the second half," Toews said following the final game before the break.

Once the Hawks break out of their 3-4-1 funk and return to their high scoring ways, how about getting a better goal celebration song? They've got to replace that annoying Amstel Light commercial tune, "Chelsea Dagger" by The Fratellis. I would suggest the appropriately titled, but lacking-in-raucousness TLC ballad, "Red Light Special."