When and How to Watch Figure Skating in the Winter Olympics: What to Know Sunday

Team USA enters Sunday having fallen from the lead, but not out of medal contention and Sunday's finale for the team events will see with some notable lineup changes.

Sunday's events will end in the first figure skating medal in the 2022 Winter Games - and Team USA plans to put some big names on the ice, including the return of local sensation Alexa Knierim to the ice.

Here is how you can watch all the figure skating action this weekend and through the rest of the Games.

What is the schedule for figure skating at the 2022 Winter Olympics?

Figure Skating began on Feb. 3 and runs through Feb. 19. The first week of programming will be entirely team events, while the second week will feature individual competition. One of the final events of the Winter Olympics will be the Exhibition Gala, during which fans will get to enjoy more personality-centric performances featuring some of the Games’ most popular skaters.

Sunday marks the third and final events for the competition. Watch live at 7 p.m. CT Sunday on NBC, NBCOlympics.com or Peacock.

Who is competing next for Team USA?

Ice dancers Madison Chock and Evan Bates – a couple on and off the ice – were chosen as co-captains of the U.S. squad for figure skating’s team event at the 2022 Winter Olympics, so it’s only fitting they get to compete as part of the team.

Chock and Bates’ time finally arrives (emphasis on finally, but more on this to come) Sunday night U.S. time as they were announced by U.S. Figure Skating as the team’s entry for the free dance.

They are joined representing the red, white and blue on the third and final day of the team event by Addison, Illinois-native Knierim and her partner Brandon Frazier, who will begin the night in the pairs free skate, and Karen Chen, who ends the team event in the women’s free skate.

Sunday night marks not only the debut of Chock and Bates at these Games but also their debut in any Olympic team event.

Knierim and Frazier also look to continue their own momentum. They were third in the pairs short, behind world and Olympic medalists, but scored a personal best in their short program for the team.

Who is in medal contention Sunday?

Americans are hedging their bets on 22-year-old Nathan Chen from Salt Lake City. Chen, known for attempting high-difficulty jumps, entered PyeongChang with high hopes but ultimately struggled to execute on the ice, leaving with a fifth place finish in the individual event. Since then, Chen has established himself as the clear favorite and the best chance for the U.S. to win an individual medal. 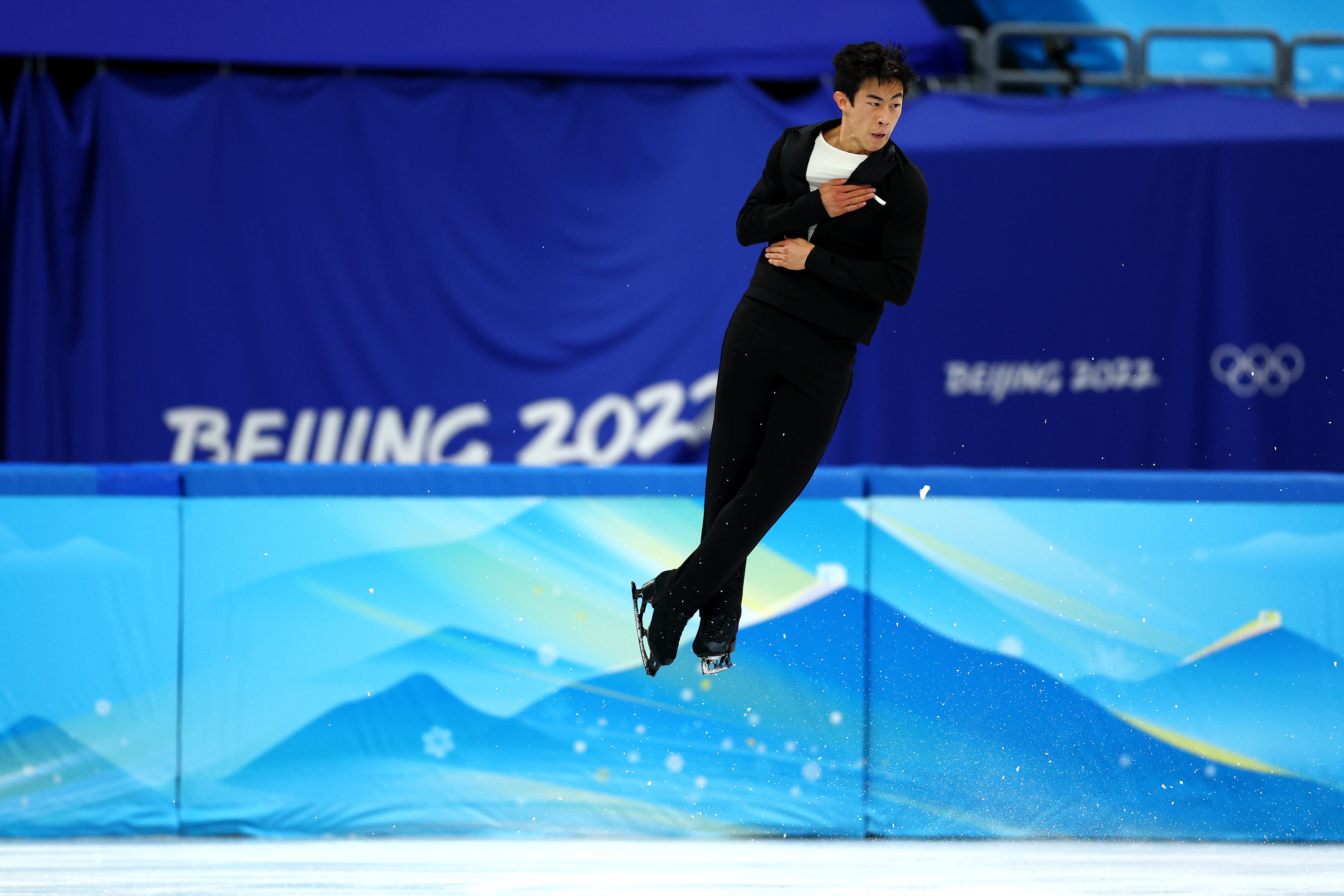 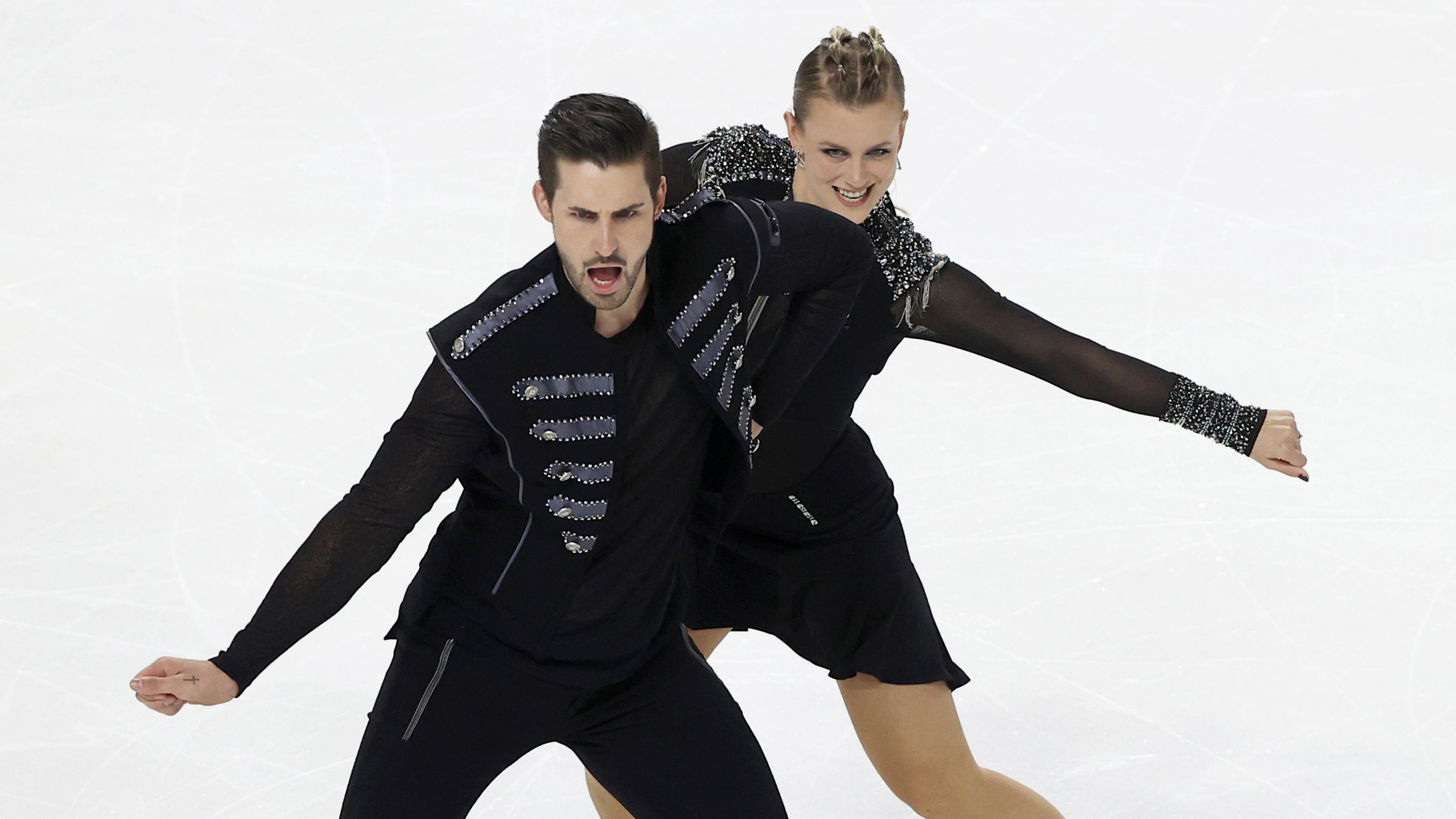 Who are the gold-medal favorites in figure skating?

The Beijing Olympics are dubbed the redemption tour for Chen. In PyeongChang, the then-18 year old posted a strong performance in the team event, but struggled in the individual event, eventually clawing his way back to fifth place after slipping to 17th. Ultimately, his Olympic experience was cut short after contracting the flu.

Since 2018, Chen has established himself as the clear favorite and the best chance for the U.S. to return to the podium in the men’s individual competition. Evan Lysacek’s 2010 gold medal was the last individual medal by an American man in figure skating.

In the women’s competition, Russian women historically dominate the individual event and could easily sweep the podium awards. Meanwhile, China has more gold medals in the pairs competition than any other country. However, the Chinese duo Sui Wenjing and Han Cong will have their work cut out for them with France, the U.S. and the Russian Olympic Committee all expected to enter competitive pairs.