The judge is delaying execution of his sentence while she considers Stone's motion for a new trial.

Roger Stone, a staunch ally of President Donald Trump, was sentenced Thursday to 40 months in federal prison on his convictions for witness tampering and lying to Congress. He was also fined $20,000.

Stone's lawyers had asked for a sentence of probation, citing his age of 67 years, his health and his lack of criminal history. Instead, he drew more than three years and two years of probation.

Stone had no immediate reaction in court when Jackson announced his sentence. Later, he emerged from the courthouse to a crowd exchanging back and forth chants of “Lock him up" and “Pardon Roger Stone." Stone got into a black SUV without speaking to reporters.

His attorney Bruce Rogow said Stone and his team would “have no comment.” The judge delayed execution of his sentence while she considers Stone's motion for a new trial.

The sentencing set off a parlor game of speculation in Washington, with many wondering when — not if — President Donald Trump would grant Stone a pardon. But Trump, who issued 11 high-profile pardons earlier this week, said he was holding off for now.

“I’m not going to do anything in terms of the great powers bestowed upon a president of the United States,” he said during an appearance in Las Vegas. "I want the process to play out. I think that’s the best thing to do because I would love to see Roger exonerated."

But even the prospect that Trump might someday pardon Stone prompted a preemptive rebuke Thursday from critics like Democratic House Intelligence Chairman Adam Schiff of California, who tweeted after the sentencing that, “to pardon Stone when his crimes were committed to protect Trump would be a breathtaking act of corruption.”

But Sen. Lindsey Graham, R-S.C., a staunch Trump ally, signaled early support for such a move, tweeting that Trump has “all the legal authority in the world” to pardon Stone if he chooses.

Stone was convicted in November on a seven-count indictment that accused him of lying to Congress, tampering with a witness and obstructing the House investigation into whether the Trump campaign coordinated with Russia to tip the 2016 election.

Jackson said during the hearing Stone's conduct led to an "inaccurate, incomplete and incorrect" report by the House Intelligence Committee and rejected the defense's argument that his actions didn't have a significant impact on the Congressional probe.

She also pointed to Stone's conduct after he was indicted. Stone repeatedly violated a gag order and was eventually banned from posting on social media for the duration of the trial after he posted an Instagram image of Jackson with what appeared to be crosshairs over her shoulder.

Jackson said Stone's use of social media to stoke public sentiment against the prosecution and the court was intended to reach a wide audience.

"The defendant engaged in threatening and intimidating behavior toward the court," she said. "This is intolerable to the administration of justice."

Stone was the sixth Trump aide or adviser to be convicted of charges brought as part of special counsel Robert Mueller’s Russia investigation.

The sentence came amid Trump's unrelenting defense of his longtime confidant that has led to a mini-revolt inside the Justice Department and allegations the president has interfered in the case. 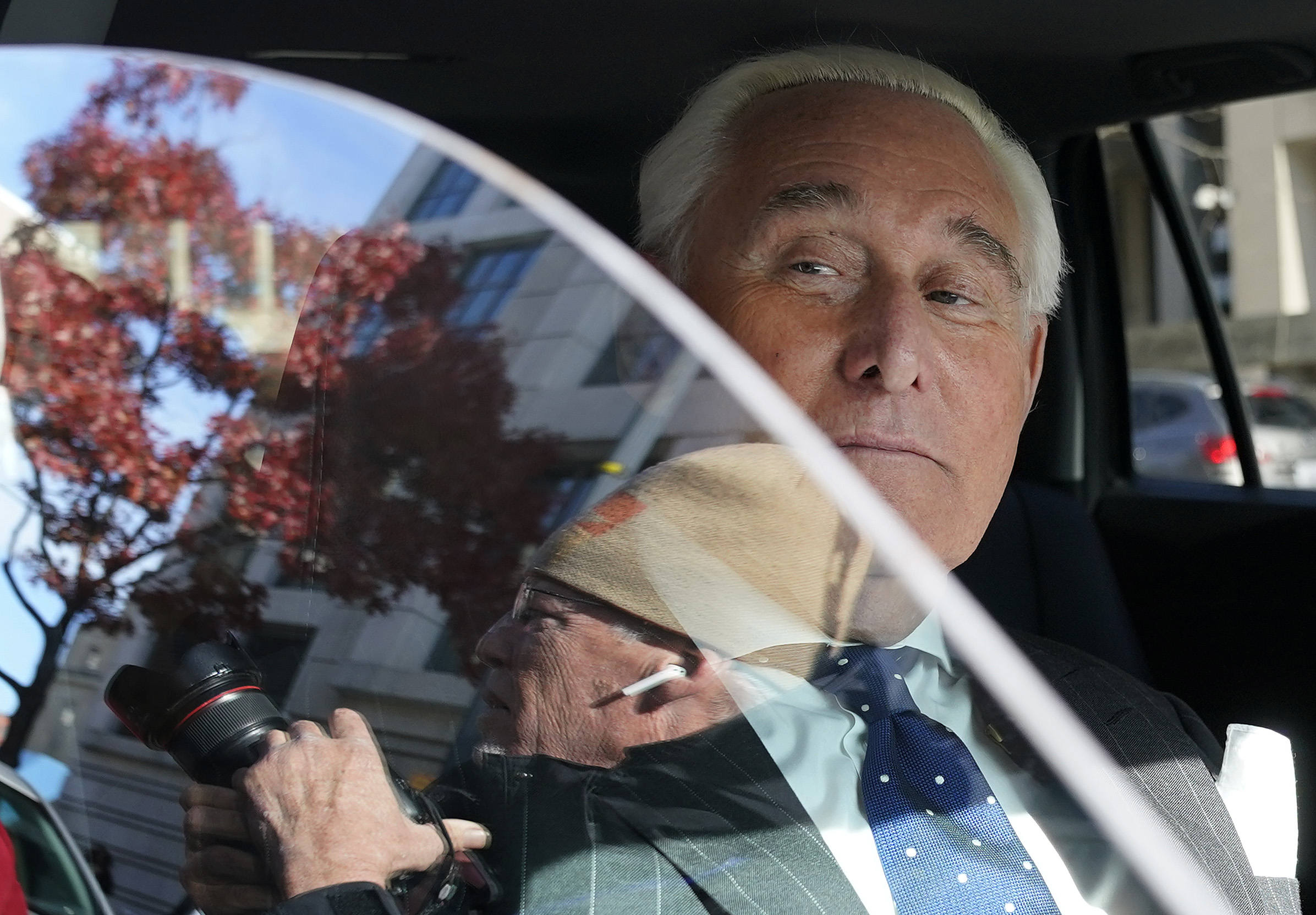 A ‘Dirty Trickster' With a Nixon Back Tattoo: What to Know About Trump Ally Roger Stone 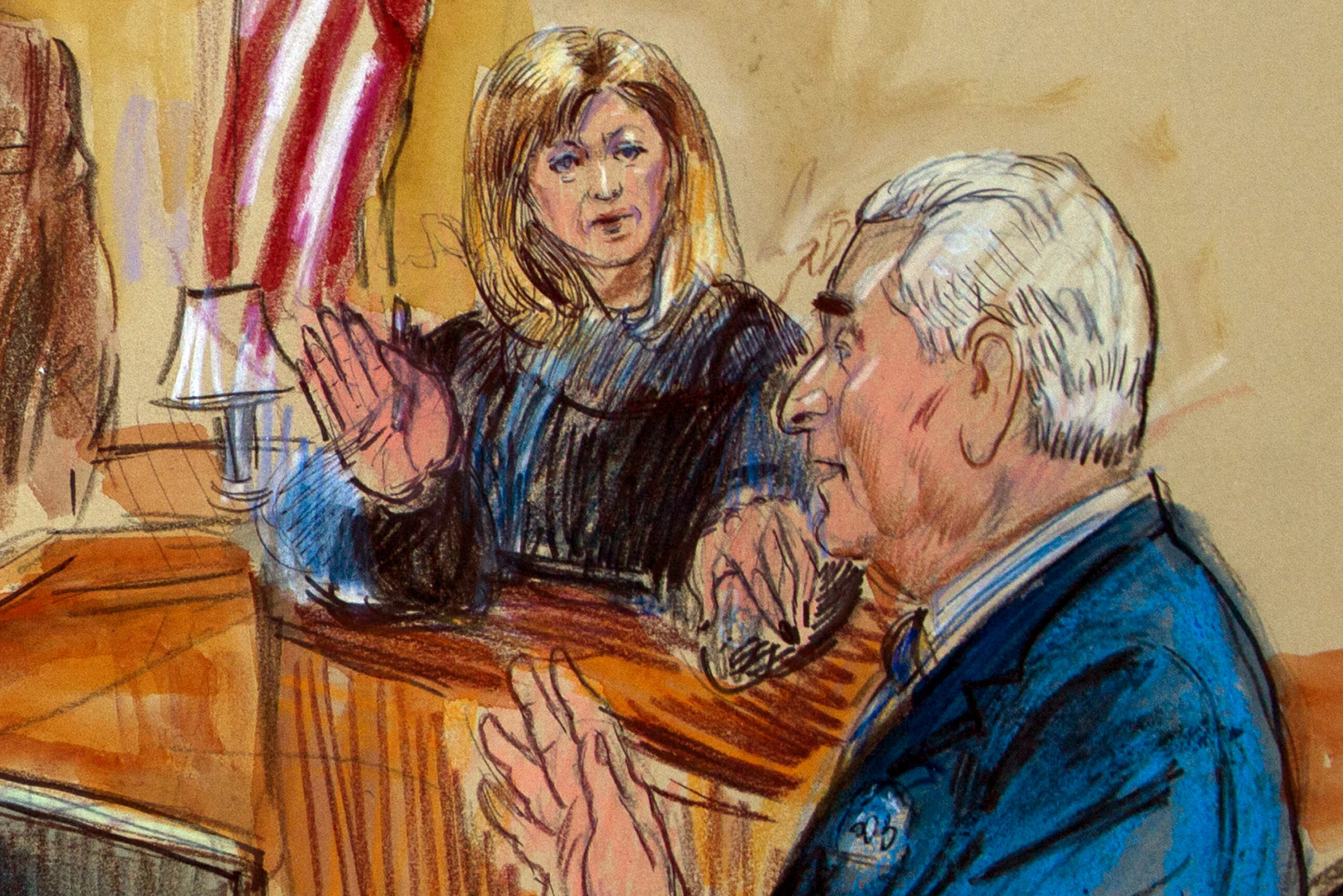 Trump took to Twitter to denounce as a “miscarriage of justice” the initial recommendation by Justice Department prosecutors that Stone receive at least seven years in prison. Attorney General William Barr then backed off that recommendation, prompting four prosecutors to quit Stone's case.

"Why are you the one who is standing here today?" Jackson asked federal prosecutor John Crabb, who took over the case after the original trial team quit.

Taking a direct shot at the department's argument that the initial recommendation was "excessive," Jackson told prosecutors "who may be new to this" and only last week realized sentencing guidelines are too harsh, that defense attorneys and judges have long pushed for a case-by-case approach "and we don't normally get the government to agree."

Crabb said there had been a "miscommunication" between Barr and Timothy Shea, the former Barr aide who now serves as the acting U.S. Attorney in the nation's capital.

Crabb asked the judge to impose “a substantial period of incarceration.”

The jail sentence seems likely to draw a public rebuke from Trump, who maintains that Stone's entire case is just an aspect of the ongoing “witch hunt” against him and his allies by bitter Democrats and the “deep state” inside the FBI and the Justice Department.

The judge angrily denied Stone was being punished for his politics or his allies.

Given Trump's recent clemency spree that saw him commute the sentence of former Illinois Gov. Rod Blagojevich, as well as nearly a dozen others, there has been speculation that Trump could eventually pardon Stone.

“I haven't given it any thought ... but I think he's been treated very unfairly,” Trump said this week. Overnight Thursday, Trump retweeted a conservative cable host's comment that what happened to Stone “should never happen again.”

In Stone's initial sentencing memorandum filed Feb. 10, prosecutors said Stone deserved a prison term lasting seven to nine years, in accordance with federal sentencing guidelines. Such a sentence would send a message to deter others who might consider lying or obstructing a congressional probe or tampering with witnesses, the prosecutors said.

Stone has denied wrongdoing and consistently criticized the case against him as politically motivated. He did not take the stand during his trial and his lawyers did not call any witnesses in his defense.

Trump Associates Indicted or Convicted During His Presidency

Prosecutors had charged in the filing that Stone “decided to double- and triple-down on his criminal conduct by tampering with a witness for months in order to make sure his obstruction would be successful.”

“Stone’s actions were not a one-off mistake in judgment. Nor were his false statements made in the heat of the moment. They were nowhere close to that,” prosecutors wrote in the court papers.

But Justice Department officials said they were caught off guard by the recommendation, even though the acting U.S. Attorney in Washington, D.C., Timothy Shea, is a former top aide to Barr. The attorney general ordered a new memorandum with a less harsh punishment, though it left provided no specifics and left the details to the judge.

Barr later said in an ABC News interview that he had not been asked by Trump to look into the case. In a stunning public rebuke, he said the president's tweets were making it “impossible” for him to do his job. Meanwhile, Barr's actions on the sentencing for Stone prompted the entire trial team to quit.

President Trump is facing rare disapproval from some of his most loyal allies: Attorney General William Barr and Senate Republicans.

The public debacle also prompted a rare statement from the Chief Judge of the D.C. District Court, Beryl A. Howell, who said “public criticism or pressure is not a factor” in judges' sentencing decisions.

The evidence presented in the trial didn’t directly address Mueller’s conclusion that there was insufficient evidence to prove a criminal conspiracy between the Trump campaign and Russia to tip the outcome of the 2016 presidential election in Trump’s favor. But it provided new insight into the scramble inside the Trump campaign when it was revealed in July 2016 that the anti-secrecy site WikiLeaks was in possession of more than 19,000 emails hacked from the servers of the Democratic National Committee.

Witnesses testified that Trump’s campaign viewed Stone as an “access point” to WikiLeaks and tried to use him to get advance word about hacked emails damaging to Hillary Clinton.

Prosecutors argued that Stone had lied to Congress about his conversations about WikiLeaks with New York radio host and comedian Randy Credico.

During the 2016 campaign, Stone had mentioned in interviews and public appearances that he was in contact with founder Julian Assange through a trusted intermediary and hinted at inside knowledge of WikiLeaks’ plans.

Testimony revealed that Stone, while appearing before the House Intelligence Committee, named Credico as his intermediary to Assange and pressured Credico not to contradict him.

After Credico was contacted by Congress, he reached out to Stone, who told him he should “stonewall it” and “plead the fifth,” he testified. Credico also testified during Stone’s trial that Stone repeatedly told him to “do a ‘Frank Pentangeli,’” a reference to a character in “The Godfather: Part II” who lies before Congress.

Prosecutors also charged that Stone had threatened Credico’s therapy dog, Bianca, saying he was “going to take that dog away from you.”