Trump Boosts School Prayer, Faith Groups as He Rallies Base

In a bid to solidify his evangelical base, President Donald Trump took steps Thursday to give religious organizations easier access to federal programs and he reaffirmed students' rights to pray in public schools.

Under orders from Trump, nine Cabinet departments proposed rules intended to remove “regulatory burdens” on religious organizations participating in federal programs by eliminating a requirement that they refer people to alternative providers upon request. Much of that follows through on an executive order Trump from 2018 that aims to put religious groups on equal footing when competing for federal grants and other funding.

At the same time, the Education Department issued its first updated guidance on school prayer since 2003. While Trump promised “big action” this month, the new guidance appears to make few major changes. 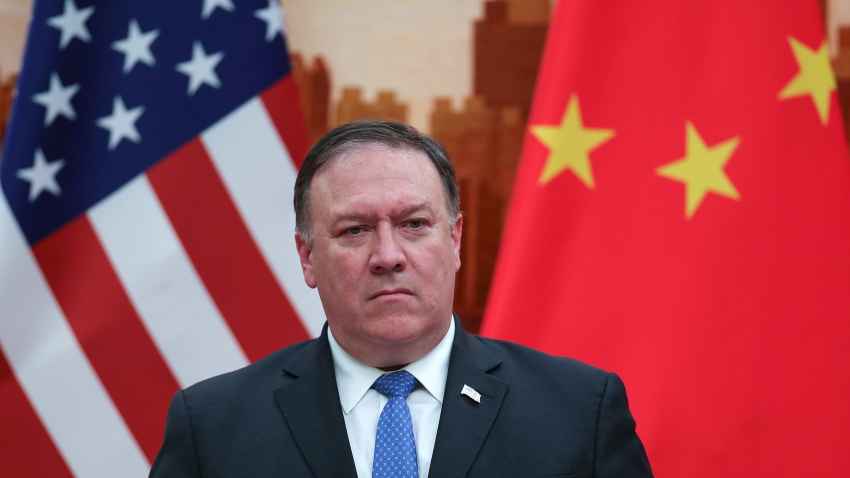 China Hits Trump Officials With Sanctions on Their Way Out

The expansion of faith-based groups’ ability to participate in government programs is a significant show of support for an evangelical constituency long a vital part of Trump’s base and it follows a Christian magazine's call for his removal from office.

Trump planned to announce the guidance on school prayer at a White House event later Thursday. A directive orders states to verify that school districts have no policies limiting constitutionally protected prayer and to refer violators to the Education Department. That's much like the 2003 guidance, but the directive goes further in requiring states to provide ways for making complaints against schools.

Students can pray on their own or together during lunch or other free times, for example, and student speakers can pray at assemblies or sports games as long as they weren't chosen to speak based on their religious perspectives, according to the guidance.

"Our actions today will protect the constitutional rights of students, teachers, and faith-based institutions," Education Secretary Betsy DeVos said in a statement.

Hours before Trump's event, federal agencies announced moves to bolster faith-based organizations. For example, a proposal from the Department of Health and Human Services would eliminate a requirement that religious-based social service organizations inform clients that they can also receive services from groups without connection to a particular religion.

The regulations “will make it more difficult to access critical social services, just because someone is LGBTQ or a different faith,” the American Civil Liberties Union tweeted. “It’s 2020 and religious freedom is STILL not a license to harm others.”

But Johnnie Moore, a member of Trump’s evangelical advisory board, lauded the moves as a fresh sign of Trump’s commitment to religious freedom.

“The White House isn’t saying whether one should pray or to whom or what they should pray to,” Moore said by email. He added that "they are simply making it clear that in the United States students have First Amendment rights also, and our `separation of church and state' wasn’t intended to suppress a vibrant religious life in America but to facilitate it.”

About 8 in 10 self-identified white evangelical Protestants approved of Trump’s performance, according to AP-NORC polling last month. But the president has nonetheless moved to shore up his already strong connection to this bloc since an editorial in the magazine Christianity Today called for his removal from office.

By returning attention to school prayer, Trump could revive a debate that had largely fallen to the periphery of national politics in recent years. Calls for stronger school prayer protections reached a crescendo in the 1980s and 1990s, with champions including President Ronald Reagan.

Public schools have been barred from leading students in classroom prayer since 1962, when the Supreme Court said it violated a First Amendment clause forbidding the establishment of a government religion. Later decisions extended the ban to school graduation ceremonies and, under certain circumstances, school athletic games.

Civil liberties groups say the firewall protects religious minorities and ensures fair treatment of all faiths. But many on the Christian right say courts and schools have pushed too far against the right to free religious expression.

Also Thursday, the White House Office of Management and Budget said in a memo that agencies must work to bring grant-making by entities that receive federal money, as well as their own grant-making, in line with the Supreme Court’s interpretation of the First Amendment.

One prominent secular group, the nonprofit Freedom from Religion Foundation, views the federal regulations for faith-based groups as “a very bad move,” co-president Annie Laurie Gaylor said by email. Gaylor said most of the proposals “appear to cover no real new ground,” but added, "How he portrays the rules may be very different from the reality.”

She spoke of a “missed opportunity” by the administration to provide “guidance about not crossing the line” to schools and teachers on requiring students to engage in activities with a religious component, regardless of potential personal objections.

Binkley reported from Boston and Schor from New York.