Harris, Ivanka Trump Stump in Georgia Ahead of Senate Runoff

Telling a crowd in Columbus that “everything is at stake” in the Jan. 5 contests, Harris said Democratic candidates Jon Ossoff and the Rev. Raphael Warnock would advance Biden policy priorities such as increased funding for schools in low-income districts, a $15,000 tax credit to first-time home buyers, and policing reforms.

“We will need the legislation to be passed,” Harris said. “We will need Jon and Raphael in the United States Senate. These are the things that are at stake.”

Harris’ other planned stop was canceled due to a scheduled Senate vote on a coronavirus relief package.

Speaking ahead of Harris, Ossoff warned that Republicans would block the Biden administration’s agenda if they kept Senate control, stymying a progressive platform to raise the minimum wage, expand access to health care and invest in infrastructure.

“We have too much good work to do, Columbus, to be mired in gridlock and obstruction,” he said.

Over the crowd's shouts of “We love Trump!” and “Fight for Trump!” she implored voters to send Republicans back to the Senate “to protect all that America stands for." She called the runoff the “most important congressional race in history,” and described Perdue and Loeffler as the “last line of defense” against Democrats' agenda and for her father in Congress.

“We need David and Kelly in the Senate to keep our economy going, to keep delivering on the president’s plans, and to keep our schools open,” she said, drawing cheers from the audience.

As she spoke, touting her father's record on unemployment and work on a COVID-19 vaccine, a truck pulling a massive “Trump 2020” sign circled the street, drawing audience members to take videos and selfies. 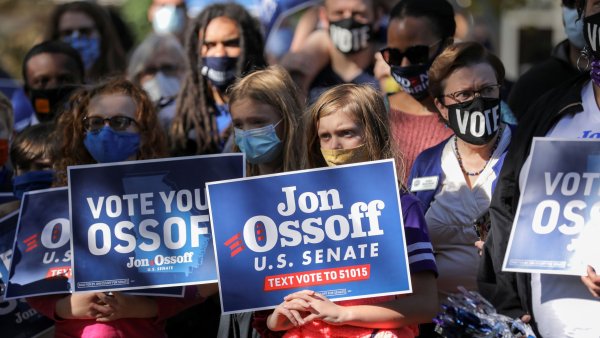 Ron Insana: If Democrats Stage an Upset Win in Georgia, It May Not Be the Market Head Wind You Think 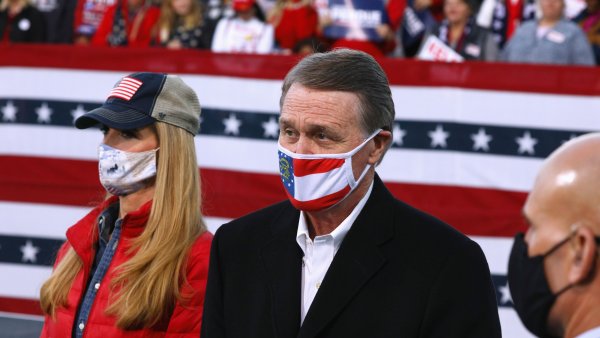 Monday's appearances were part of a string of pre-runoff visits by high-profile surrogates of the outgoing president and the president-elect. Biden himself has already stumped in Georgia, and Vice President Mike Pence has made several visits. President Donald Trump said late Saturday that he would return Jan. 4 for an election-eve rally, just two days before Congress meets to count votes from the Electoral College.

Trump has refused to accept the results of his own election loss, alleging without evidence a conspiracy to throw the election to Biden. In a tweet announcing his Georgia plans, Trump continued to express anger at Republican Gov. Brian Kemp and GOP Secretary of State Brad Raffensperger for certifying Biden's win over him by more than 11,000 votes.

Both Perdue and Loeffler have avoided explicit public acknowledgement of Biden’s win while attacking Raffensperger.

Ahead of Ivanka Trump's remarks, Perdue, who is running against Ossoff, repeated his admonition to Georgians that “the eyes of the world are on us right now.” Loeffler, who is being challenged by Warnock, reiterated her campaign's assertion that the pastor is a radical and socialist. “If we don’t vote, we won’t just lose; we’ll lose the country," she said.

Warnock pushed back at his opponent's repeated digs, which he said hindered his attempts at “a substantive debate about the people of Georgia.”

"My opponent is trying to reduce this race to the kind of empty schoolyard insults made between children who aren’t thinking very carefully on a playground," he said. "I’m trying to have a debate, and she’s engaged in name-calling. That’s all right. As we say in the South, ‘Bless her heart.’”