The agency also said it will make it easier for foreign manufacturers to begin shipping more formula into the U.S.

Under fire from parents and politicians, President Joe Biden’s administration announced steps Monday to ease a nationwide shortage of baby formula, including reopening the largest domestic manufacturing plant and increasing imports from overseas.

The Food and Drug Administration said it was streamlining its review process to make it easier for foreign manufacturers to begin shipping more formula into the U.S.

“The FDA expects that the measures and steps it’s taking with infant formula manufacturers and others will mean more and more supply is on the way or on store shelves moving forward,” FDA Commissioner Robert Califf told reporters.

Califf said the U.S. will prioritize companies that can provide the largest shipments and quickly show documentation that their formulas are safe and compatible with U.S. nutrition standards. The policy is structured as a temporary measure lasting six months.

The imports announcement came shortly after regulators said they’d reached a deal to allow Abbott Nutrition to restart its Sturgis, Michigan-based plant, which has been closed since February due to contamination issues. The company must overhaul its safety protocols and procedures before resuming production. 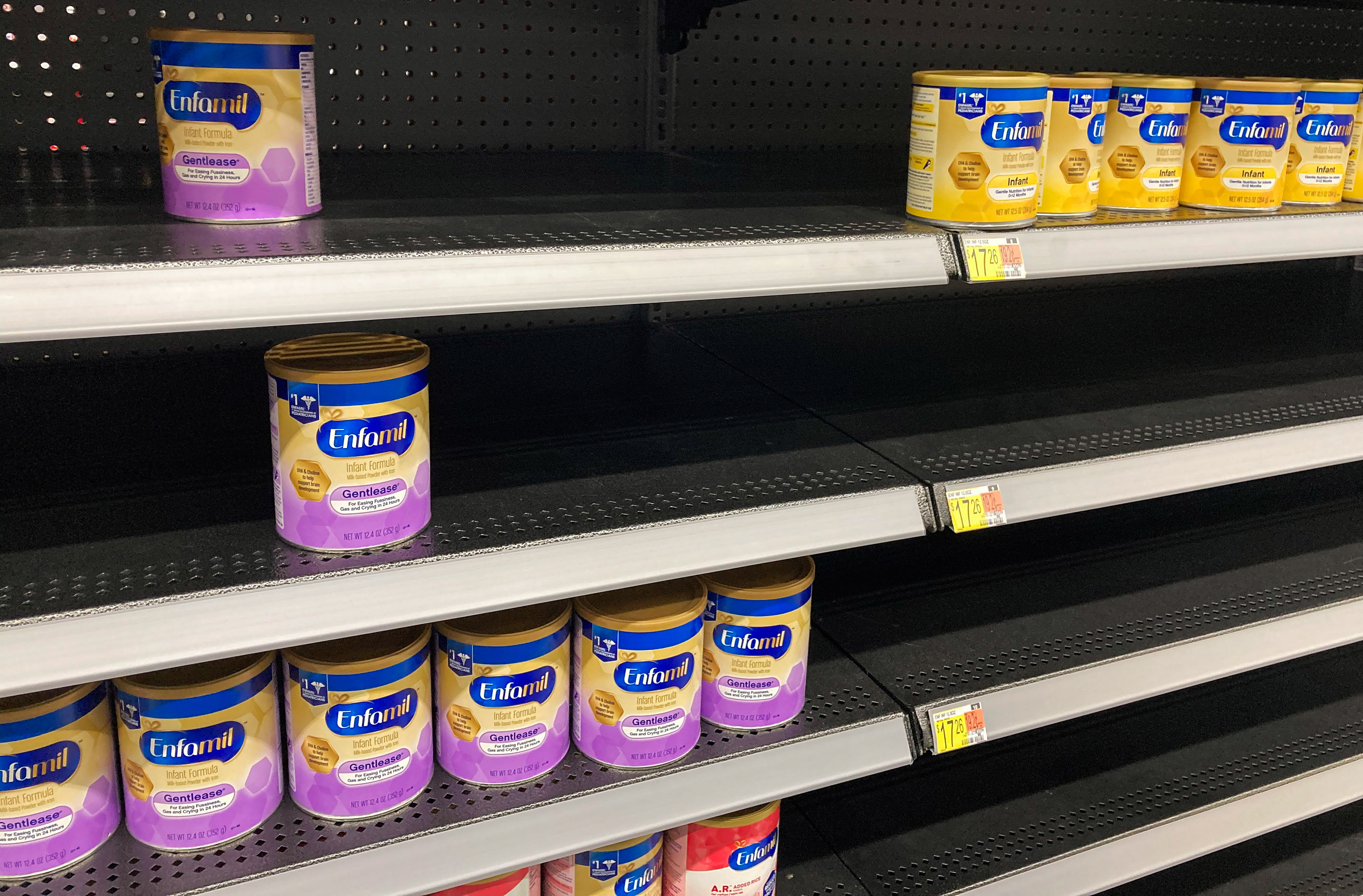 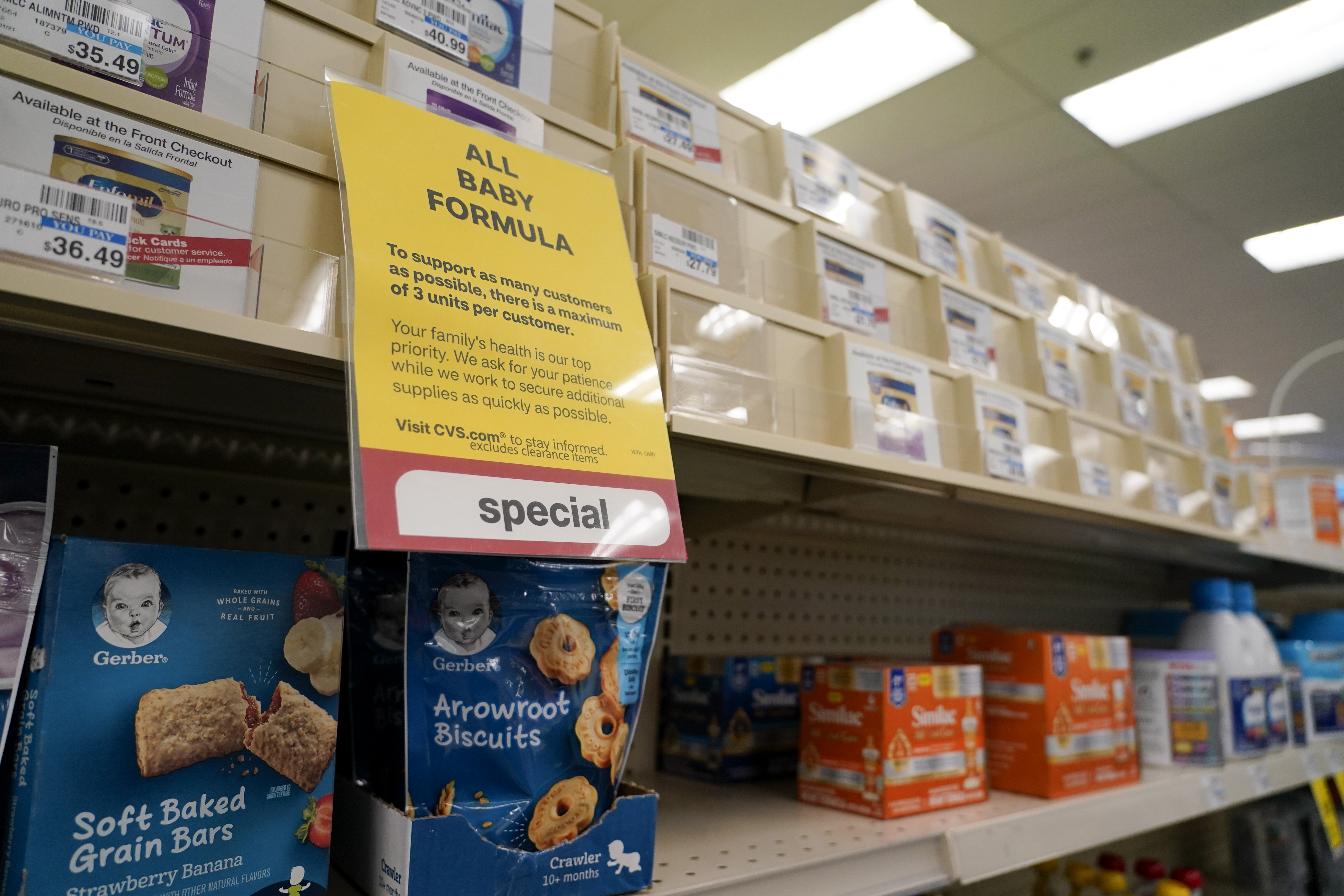 Neither step will have an immediate effect on tight supplies that have left many parents searching for formula online or in food banks.

After getting the FDA’s OK, Abbott said it will take eight to ten weeks before new products begin arriving in stores. The company didn’t set a timeline to restart manufacturing.

Getting imports into the U.S. supply chain will also take several weeks, according to administration officials. Products from Australia, New Zealand and the U.K. are expected to meet the standards needed for importation.

But regulators said national industry data shows most U.S. stores, on average, still have 80% of their formula inventory in stock. They suggested some of the empty shelves seen in recent days may be due to panic buying by parents.

Monday's announcement was previewed last week by the White House, which has been leaning on the FDA and formula makers to quickly find ways to alleviate the shortage. Outrage over the issue has quickly snowballed and handed Republicans a fresh talking point to use against President Biden ahead of November elections.

The shortage stems from a February recall by Abbott that exacerbated ongoing supply chain disruptions among formula makers, leaving fewer options on stores shelves across much of the country. The shortage has led retailers like CVS and Walgreens to limit how many containers customers can purchase per visit.

Abbott’s voluntary recall was triggered by four illnesses reported in babies who had consumed powdered formula from its plant. All four infants were hospitalized with a rare type of bacterial infection and two died.

After a six-week inspection, FDA investigators published a list of problems in March, including lax safety and sanitary standards and a history of bacterial contamination in several parts of the plant. Under Monday's agreement, Abbott must regularly consult with an outside safety expert to restart and maintain production.

If you're running out of powdered baby formula, there are other varieties of formula you can feed your baby, says pediatrician Dr. Anthony Porto. NBCLX storyteller Clark Fouraker spoke with him and University of Miami business dean John Quelch to understand the shortage and help parents through it.

Chicago-based Abbott has emphasized that its products have not been directly linked to the bacterial infections in children. The FDA and CDC said last month that samples of the bacteria found at its plant did not match the strains collected from two babies by federal investigators.

On a call with reporters Monday, FDA staffers noted they were unable to collect bacterial strains from two of the four patients, limiting their chances of finding a match.

“Right from the get-go we were limited in our ability to determine with a causal link whether the product was linked to these four cases because we only had sequences on two," FDA's food director Susan Mayne said.

Fixing the violations uncovered at Abbott’s plant takes time, according to former FDA officials. Companies need to exhaustively clean the facility and equipment, retrain staff, repeatedly test and document there is no contamination.

As part of the FDA's new import policy, regulators said companies would need to provide documentation of their factory's inspections.

Pediatricians say baby formulas produced in Canada and Europe are roughly equivalent to those in the U.S. But traditionally, 98% of the infant formula supply in the U.S. is made domestically. Companies seeking to enter the U.S. face several major hurdles, including rigorous research and manufacturing standards imposed by the FDA.

Before baby formula was mass produced about 100 years ago, many babies suffered from malnutrition if their mothers were unable to breastfeed them, says Carla Cevasco, professor of American Studies at Rutgers University. Today, many moms rely on formula to ensure their baby's health — and may not be able to breastfeed, or their baby may have different nutritional needs that would be addressed with formula.

San Diego father Steven Hyde has faced heart-wrenching challenges finding formula for his medical fragile daughter, who was on an Abbott formula but has had to switch with the recall and subsequent shortages in other brands.

Zoie Hyde was born 19 months ago with no kidneys, a rare life-threatening condition that requires dialysis and a feeding tube until she weighs enough for a kidney transplant.

Hyde said he used an organic brand from overseas until costs and customs hurdles made that too difficult. Friends and strangers from out of state have sent him other brands, but each time she switches requires more blood tests and monitoring, Davis said.

Despite her challenges, Zoie is walking, talking and “doing pretty good’’ on other developmental milestones, Davis said.