Top US Officials Visit Kyiv, Announce Return of US Diplomats to Ukraine

Asked about what the U.S. sees as success, Defense Secretary Lloyd Austin highlighted sovereignty for Ukraine and said "we want to see Russia weakened to the point where it can’t do things like invade Ukraine”

American Secretary of State Antony Blinken and Defense Secretary Lloyd Austin said Monday after a secrecy-shrouded visit to Kyiv that Ukrainian President Volodomyr Zelenskyy is committed to winning his country's fight against Russia and that the United States will help him achieve that goal.

“He has the mindset that they want to win, and we have the mindset that we want to help them win,” Austin told reporters in Poland, the day after the three-hour face-to-face meeting with Zelenskyy in Ukraine.

Austin said that the nature of the fight in Ukraine had changed now that Russia has pulled away from the wooded northern regions to focus on the eastern industrial heartland of the Donbas. Because the nature of the fight has evolved, so have Ukraine's military needs, and Zelenskyy is now focused on more tanks, artillery and other munitions.

“The first step in winning is believing that you can win," Austin said. "We believe that they can win if they have the right equipment, the right support, and we're going to do everything we can ... to ensure that gets to them.”

Asked about what the U.S. sees as success, Austin said that “we want to see Ukraine remain a sovereign country, a democratic country able to protect its sovereign territory. We want to see Russia weakened to the point where it can’t do things like invade Ukraine.”

The trip by Blinken and Defense Secretary Lloyd Austin was the highest-level American visit to the capital since Russia invaded in late February. 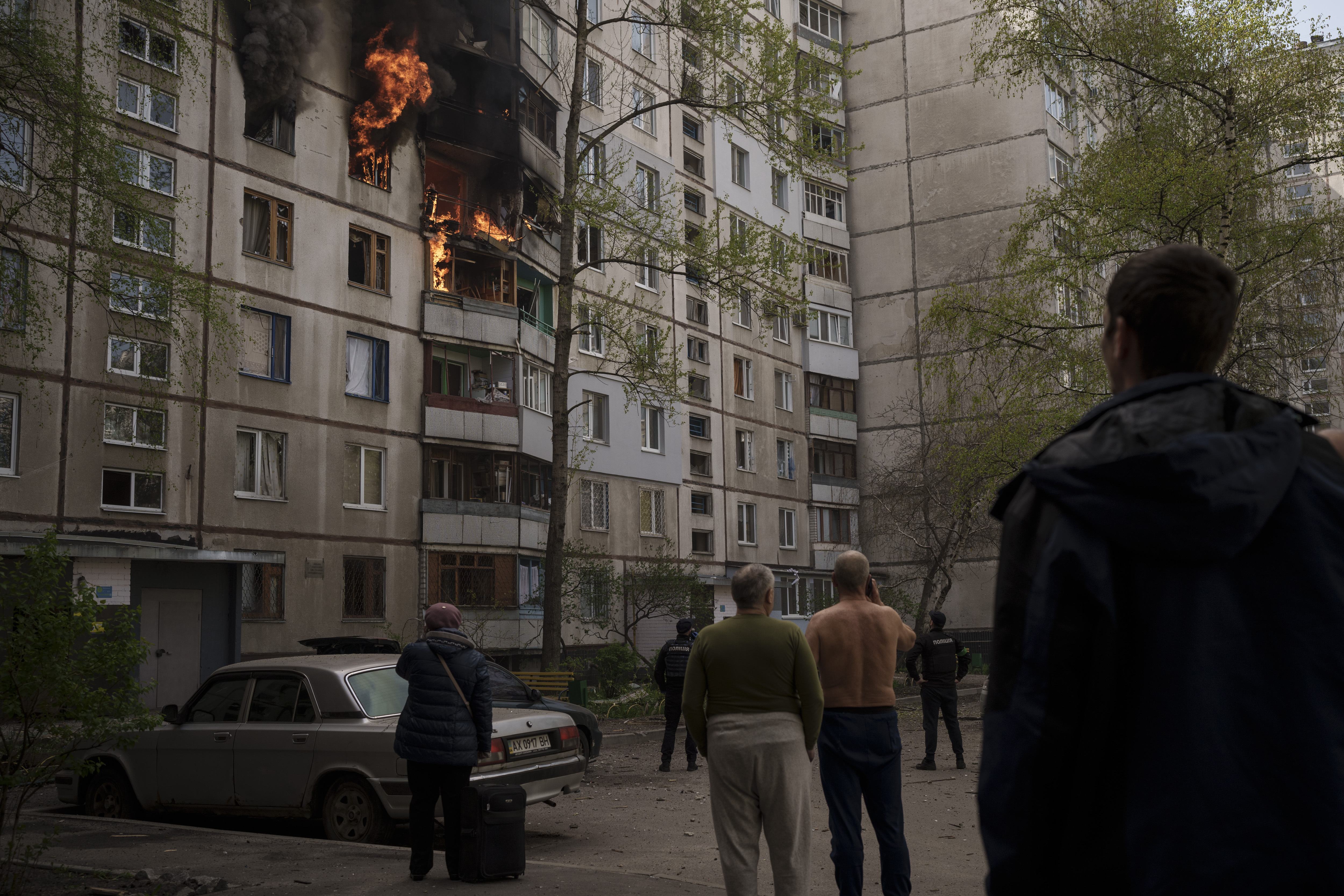 They told Zelenskyy and his advisers that the U.S. would provide more than $300 million in foreign military financing and had approved a $165 million sale of ammunition.

“We had an opportunity to demonstrate directly our strong ongoing support for the Ukrainian government and the Ukrainian people," Blinken said. "This was, in our judgment, an important moment to be there, to have face-to-face conversations in detail.”

Blinken said their meeting with the Ukrainians lasted for three hours for wide ranging talks, including what help the country needs in the weeks ahead.

“The strategy that we've put in place, massive support for Ukraine, massive pressure against Russia, solidarity with more than 30 countries engaged in these efforts is having real results,” Blinken said.

“When it comes to Russia's war aims, Russia is failing. Ukraine is succeeding. Russia has sought as its principal aim to totally subjugate Ukraine, to take away its sovereignty, to take away its independence. That has failed.”

Ukrainian officials say at least five people were killed and eighteen were injured after a missile strike in the city of Odesa, Ukraine on Saturday

As expected, President Joe Biden announced on Monday his nomination of Bridget Brink to serve as U.S. ambassador to Ukraine. Brink, a career foreign service officer, has served since 2019 as ambassador to Slovakia. She previously held assignments in Serbia, Cyprus, Georgia and Uzbekistan as well as with the White House National Security Council. The post requires confirmation by the U.S. Senate.

The announcement comes as American diplomats prepare to return to Ukraine this coming week, although the U.S. embassy in Kyiv will remain closed for now.

Journalists who traveled with Austin and Blinken to Poland were barred from reporting on the trip until it was over, were not allowed to accompany them on their overland journey into Ukraine, and were prohibited from specifying where in southeast Poland they met back up with the Cabinet members upon their return. Officials at the State Department and the Pentagon cited security concerns.

Austin and Blinken announced a total of $713 million in foreign military financing for Ukraine and 15 allied and partner countries; some $322 million is earmarked for Kyiv. The remainder will be split among NATO members and other nations that have provided Ukraine with critical military supplies since the war with Russia began, officials said.

Such financing is different from previous U.S. military assistance for Ukraine. It is not a donation of drawn-down U.S. Defense Department stockpiles, but rather cash that countries can use to purchase supplies that they might need.

The new money, along with the sale of $165 million in non-U.S.-made ammunition that is compatible with Soviet-era weapons the Ukrainians use, brings the total amount of American military assistance to Ukraine to $3.7 billion since the invasion, officials said.

Biden has accused Russian President Vladimir Putin of genocide for the destruction and death wrought on Ukraine. Just on Thursday, Biden said he would provide a new package of $800 million in military aid to Ukraine that included heavy artillery and drones.

Congress approved $6.5 billion for military assistance last month as part of $13.6 billion in spending for Ukraine and allies in response to the Russian invasion.

From Poland, Blinken plans to return to Washington while Austin will head to Ramstein, Germany, for a meeting Tuesday of NATO defense ministers and other donor countries.

That discussion will look at battlefield updates from the ground, additional security assistance for Ukraine and longer-term defense needs in Europe, including how to step up military production to fill gaps caused by the war in Ukraine, officials said. More than 20 nations are expected to send representatives to the meeting.