Michigan and five other states hold presidential contests on Tuesday at a critical point in the Democratic race. During a stop at the auto plant Tuesday, Joe Biden faced off in a testy exchange with a worker who accused him of “actively trying to end our Second Amendment right.”

Bernie Sanders proved his 2016 presidential bid was serious with an upset victory in Michigan powered by his opposition to free trade and appeal among working-class voters. Four years later, the same state could either revive the Vermont senator's campaign or relegate him to the role of protest candidate.

Michigan and five other states already began voting early Tuesday morning in what will be a critical point in the Democratic race.

Former Vice President Joe Biden is looking to quash Sanders' hopes and cement his own front-runner status just a week after resurrecting his beleaguered White House bid with a delegate victory on Super Tuesday. He played up his underdog story on Monday as he campaigned across Michigan, reflecting on his stutter as a child and the deaths of his first wife and young daughter.

And Biden wasn't alone. The former vice president courted the state's influential African American voters alongside the two most prominent black candidates previously in the 2020 race, Kamala Harris and Cory Booker, who endorsed Biden in recent days as part of a broader consolidation of support among party leaders.

Sanders is in an urgent fight to turn things around as the primary calendar quickly shifts to other states that could favor Biden and narrow his path to the nomination. The senator countered the parade of Democratic firepower lining up behind Biden by securing the endorsement of the Rev. Jesse Jackson and deploying Rep. Alexandria Ocasio-Cortez, D-N.Y., on his behalf.

Dozens of Detroit residents voted before the sun came up at a polling place set up inside Greater Grace Temple, a mammoth church in the city that hosted funerals for Aretha Franklin and Rosa Parks.

Among the voters was Tahechia Franklin, a 50-year-old who works in property management.

Franklin, who voted for Bernie Sanders, said the most important issues to her are health care and “I want Trump out.”

Having devoted several days to Michigan, the Vermont senator spent the eve of Tuesday's primaries in Missouri, where he downplayed questions about electability and insisted that the “energy and excitement” of his supporters made him the strongest Democrat to run against President Donald Trump this fall.

Tuesday marks the first time voters will weigh in on the Democratic contest since it effectively narrowed to a two-person race between Sanders and Biden. It will be another test of whether Sanders can broaden his appeal among African Americans. Biden, meanwhile, must show that he can keep momentum going after his surprise Super Tuesday turnaround.

"I like his chances," Michigan Gov. Gretchen Whitmer, who has endorsed Biden, said of the former vice president in an interview.

"He knows Michigan," Whitmer added. "When our back was up against the wall during the auto struggles of the past, it was Barack Obama and Joe Biden who had our backs."

That's a reference to the Obama administration overseeing federal bailouts that helped the auto industry — the lifeblood of Michigan's economy — weather the 2009 financial crisis. Sanders counters that he, too, voted to save the auto industry. He also says that, unlike Biden, he opposed the North American Free Trade Agreement, which he said prompted thousands of Michigan jobs to move to Mexico since taking effect in 1994.

“You’re the best damn workers in the world,” Biden shouted through a megaphone as workers in hard hats chanted “Joe.” “Wall Street didn’t build this country. You built this country.”

Biden ticked off the names of six former presidential rivals who have endorsed him just in the past week during a Monday appearance with Booker in Flint, Michigan, a community that has seen auto industry jobs disappear: "They’ve all come out and endorsed at one time ... the candidate that they think can win."

And later in Detroit, he stood on stage grasping hands with Whitmer, Booker and Harris, a powerful trio of potential vice presidential picks should Biden become the Democrats' presidential nominee.

The large rally was interrupted repeatedly by protesters, however, who railed against Biden's support for the North American Free Trade Agreement and his reluctance to embrace sweeping environmental proposals outlined in the so-called Green New Deal.

In a scuffle with environmental protesters in the midst of Biden’s remarks, senior adviser Symone Sanders was knocked to the ground. She was not hurt. Less than a week ago she tackled a protester who rushed the stage as Biden spoke in California.

During his stop at the auto plant Tuesday, Biden again faced off in a testy exchange with a worker who accused him of “actively trying to end our Second Amendment right.” Biden responded, “You're full of sh--,” and went on to say that while he supports the Second Amendment, “Do you need 100 rounds?” Biden’s gun-control plan reinstates the assault weapons ban and includes a voluntary buyback program for assault weapons, stopping short of a mandatory buyback program that some of his opponents had supported in the primary.

Vice President Joe Biden was involved in a heated exchange with a Fiat-Chrysler worker in Detroit, Michigan. The worker said Biden was trying to strip away his Second Amendment rights. Biden responded that he would call for an assault weapon ban, not a ban on all weapons. 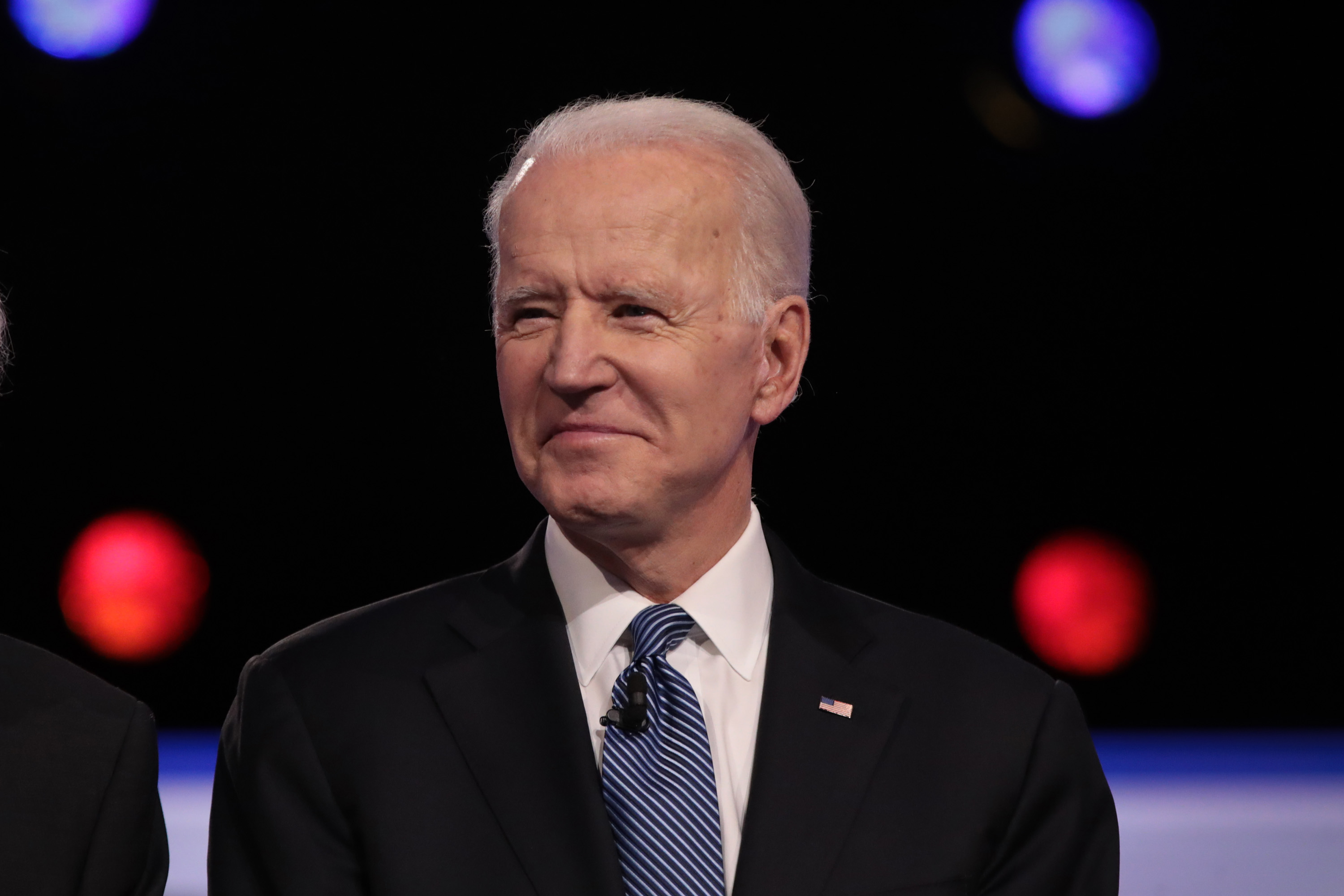 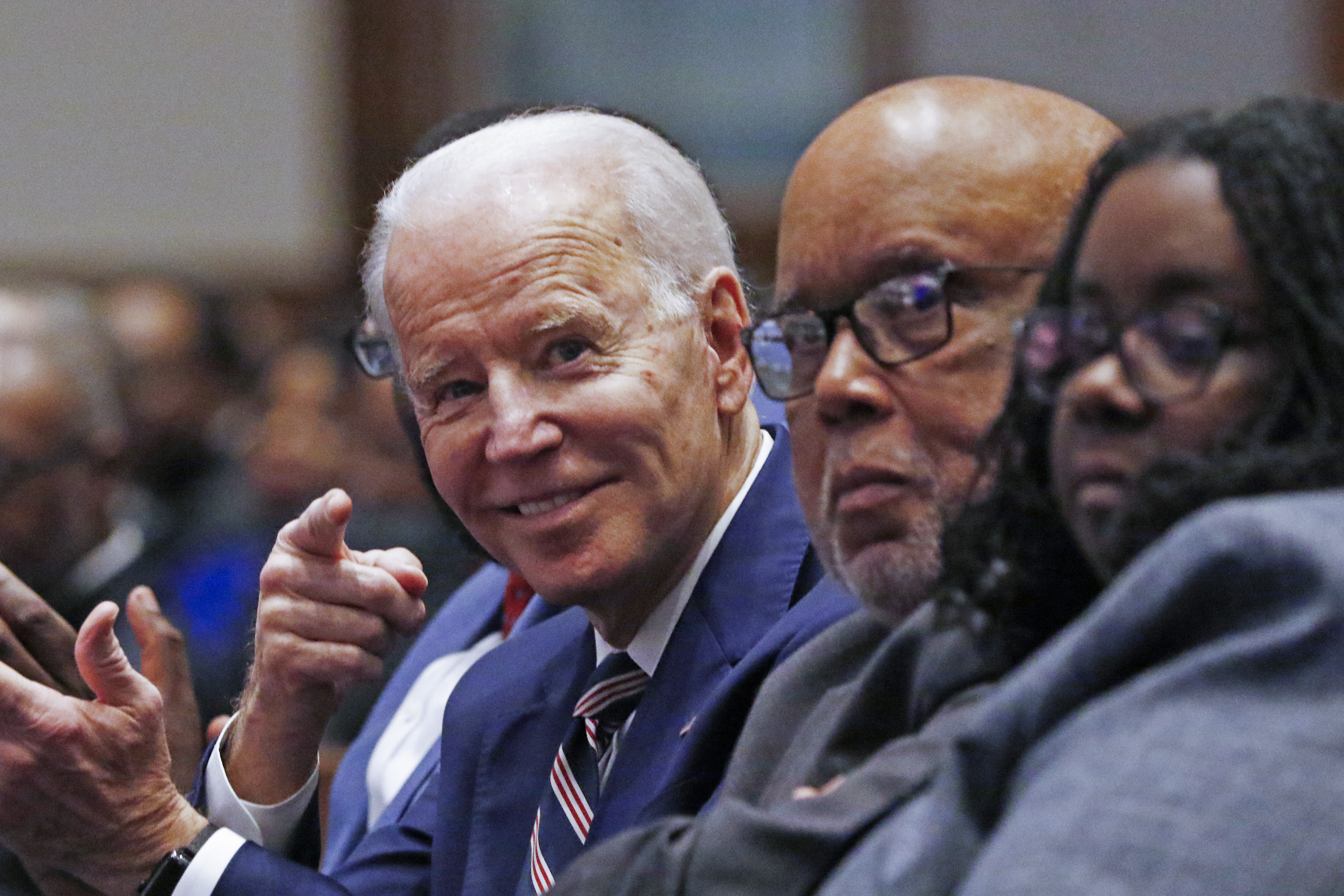 Biden in Mississippi, Sanders in Michigan Before Primaries

Anthony Fauci, the nation’s leading infectious disease expert, stopped short of calling on candidates to put a pause on political rallies. Instead, he said he wouldn’t criticize someone seeking office for putting a pause on big gatherings.

An outstanding question going into Tuesday is whether Massachusetts Sen. Elizabeth Warren, who dropped out of the race last week, will endorse Biden or Sanders. So far, she's declined to back either, an especially frustrating development for Sanders, who could use Warren's help in unifying progressives in much the same way Biden has been able to rally moderates.

New York City Mayor Bill de Blasio, who has endorsed Sanders, called for Warren to join him. He tweeted Tuesday that "if the shoe was on the other foot" Sanders would have endorsed her.

Sanders has scoffed at suggestions he could drop out if he doesn't win Michigan, but his travel schedule underscores its importance. He canceled a trip to Mississippi and instead made five campaign stops across Michigan since Friday.

Sanders won't say if he's personally lobbying Warren for her endorsement. He did manage to secure the backing of Jackson, who said it was no time for centrist compromise.

He jabbed Biden during a Monday appearance in downtown St. Louis, reminding a largely young crowd of the former vice president's long record in Washington. Sanders noted that unlike Biden, he opposed the war in Iraq, Wall Street bailouts after the 2008 collapse and any talk of cuts to Social Security.

"In a general election, which candidate can generate the enthusiasm and the excitement and the voter turnout we need?" Sanders asked. "If you want to defeat Trump, which all Democrats do and the majority of independents do and some Republicans do, we are that campaign."

One of Sanders' highest-profile supporters, Ocasio-Cortez, struck a far more conciliatory tone the day before addressing 10,000-plus on the campus of the University of Michigan on Sunday night, saying, "In order for us to win, we have to grow."

"We must be inclusive. We must bring more people into this movement," she said, urging Sanders supporters to shed "cynicism and exclusion" and "turn with an embracing posture, where all people are welcome in a people's movement."

Sanders is optimistic about Washington state on Tuesday, but could face hurdles in Mississippi and Missouri. Sanders' team acknowledges he will also struggle in next week's Florida primary, where the senator's past defense of Fidel Castro looms large. He also could face long odds in Ohio and Illinois — especially if he underperforms in Michigan. Both of those states also vote March 17.

The wild card next week could be Arizona, where Sanders will be counting on strong Latino support, which lifted him to victory in California.

Sanders advisers are aware that Biden could build an insurmountable delegate lead if he runs up the score in the upcoming contests. They hope to continue doing well in the West before picking up momentum in places like delegate-rich New York, which holds its primary next month.

Moderate Democrats are rallying around the candidacy of Joe Biden ahead of tomorrow's Super Tuesday primaries.

There's no guarantee Sanders could last that long this time, however, given the higher expectations he now faces. Even some of those attending Sanders rallies are beginning to feel it, although his St. Louis audience was optimistic.

Alec McAulay, a 19-year-old college student from St. Louis County, said Sanders has proved that he’s a true alternative to the president.

"I think Biden agrees with Trump too much, more than any Democrat should," McAulay said.