Haitian Deportees Start Over in Country They Don't Recognize

Like many Haitians, Claile Bazile said she departed after the Caribbean nation's previous devastating earthquake, in 2010, because she couldn’t find a job and didn’t want to burden her family

Claile Bazile doesn’t know where she and her 2-year-old son will stay once they leave the hotel where officials temporarily set aside rooms for some of the hundreds of people streaming into Haiti after being expelled from the U.S. in the past couple of days.

“They’re out on the street,” the 35-year-old said late Sunday of her mother, five sisters and brother.

Bazile is among those scrambling to find food, housing and jobs after being deported to a country they left almost a decade ago that is now largely unfamiliar: The president has been assassinated, an earthquake destroyed their relatives’ homes, and gang violence has displaced thousands who now sleep on the floor in temporary shelters.

Like many Haitians, Bazile said she departed after the Caribbean nation's previous devastating earthquake, in 2010, because she couldn’t find a job and didn’t want to burden her family. Others fled because of worsening violence. Many traveled to Chile, where they found work that dried up amid the pandemic, prompting them to head to Mexico in hopes of settling in the U.S.

They're now returning to a nation that is even more violent, impoverished and politically unstable than when they left. US Officials Defend Expulsion of Haitians From Texas Town 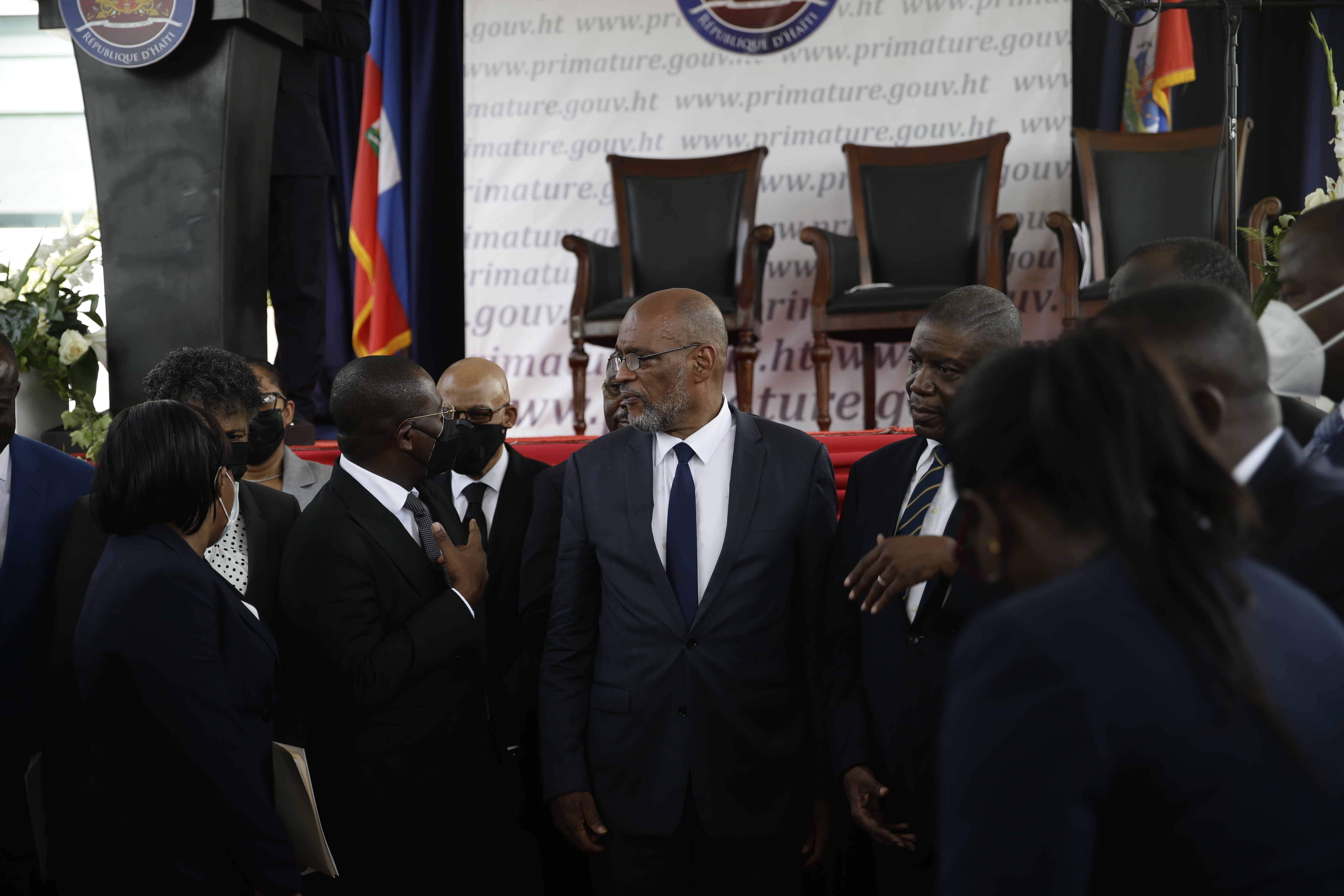 Gangs control roughly a third of the capital of Port-au-Prince, where some traffic circles are littered with burned tires and other materials piled up to be used as barricades. Overcrowded buses known as tap-taps kick dust into air already clogged with columns of black smoke that rise from communities where some warehouses and police stations have been looted.

Garbage is rarely picked up, so street vendors usually burn it themselves at all hours. Dozens of children walk around barefoot, some naked, asking for food and water around the entrances of neighborhoods that gangs recently razed. Women often are forced to walk long distances with heavy buckets on their heads since potable water is a scarcity in much of Haiti.

Even in the more upscale parts of the city, including Petionville, one hour of heavy rain will push garbage and rocks into the street, forcing people to stay home as rivers of sludge flow over broken pavement.

Prime Minister Ariel Henry, who was appointed to the position just weeks after President Jovenel Moïse was killed July 7 at his home, has pledged to help the deportees as other government officials warn that Haiti is not prepared to handle them.

More than 320 migrants were deported to Haiti on Sunday, and two flights arrived early Monday afternoon, with one plane carrying some 130 migrants, according to Haiti’s Office of National Migration. Additional flights with hundreds more migrants are expected this week.

Doctors Without Borders, which recently closed a clinic in one of the capital’s most violent areas, demanded that the U.S. stop deporting migrants based on humanitarian grounds.

“The insecurity that we see today in Port-au-Prince is the worst we have seen in decades,” the aid group said, noting more than half the patients at one of its hospitals suffer life-threatening gunshot wounds. “It is unconscionable to return migrants against their will to this situation of uncertainty and mortal danger.”

For many of the deportees, the only guarantee is a hot plate of rice and meat served at the airport before they must venture into the streets of Port-au-Prince and beyond, some with young children, as they seek shelter or await help from relatives. Some have neither.

Joseph Derilus, 33, had worked cleaning the beach for a seaside hotel near Port-au-Prince before concerns over his financial situation and increasing violence led him to find a construction job in Chile following the 2010 earthquake. He lived there for four years before heading to the U.S.-Mexico border.

Now, he’s back in Haiti with his wife and a son who’s nearly 2 years old.

“I don’t have money. Everything is very complicated,” he said. “There’s no security in Haiti. There’s nothing.”

It’s not just the capital. The country of more than 11 million people is struggling with a nationwide spike in gang activity, soaring inflation rates and dwindling jobs. About 60% of people earn less than $2 a day, and those returning to Haiti will be competing with the tens of thousands of out-of-work locals seeking employment.

“Our families are looking for life because their home does not offer them life,” said Haitian economist Etzer Emile. “We as citizens have a duty to work together to build a home.”

The prime minister said in a statement late Sunday he is doing everything possible to ensure political stability and strengthen the country’s economy to help improve living conditions for all Haitians, including the deportees.

Henry said he has instructed local authorities and officials at embassies and consulates to investigate the deportations and assess the situation “to propose a quick solution to this nightmare while supporting those concerned.”

“These images sadden us deeply and affect the dignity of everyone,” he said of widely viewed photos and video of U.S. border agents on horses pushing migrants away from a Texas town.

Some migrants said they plan to leave Haiti as soon as possible to find jobs elsewhere, but they worry about how they’ll earn money to finance that plan. Others say they will take some time to settle in Haiti and see if they can find a job before making any decisions.

Rollphson Saintelous, 27, said chronic unemployment led him to leave Haiti in May 2016 after finishing his first year at the university, where he planned to study business administration.

“The country really didn’t offer me anything,” he said.

He left for Chile and found work as a ball boy on the tennis courts of a private university. But it was a job that required late hours and left him with no transportation options to return home at night, so he found a construction job and moved up in the field as he learned to become a carpenter and electrician. But those jobs also dwindled amid the pandemic, and he left for Mexico only to now find himself back in Haiti wondering how he will provide for his wife and 2-year-old daughter.

“I don’t know how to get a job, but I know that I can do anything,” he said. “I am open to doing anything.”

Emmanuel Guelomme, 27, said he doesn’t know where he, his wife or 6-year-old stepson will live in upcoming weeks. His family lives in the southern coastal city of Leogane, and he’s not sure how he’ll get there or if there’s room given that his parents, sister, a nephew and several cousins share homes. He also wonders how and if they'll be able to celebrate his stepson's birthday next week.

“We’ve just arrived, and we’re not thinking clearly,” said Guelomme, who was studying to become a civil engineer but left Haiti in 2016 because he needed a job to help support himself and his family.

“I thought I could come back to Haiti as a tourist to visit my family, enjoy ourselves and go back to the U.S.," he said. "Unfortunately, that’s not what happened.”