EXPLAINER: Which Weapons Are Being Used in the Russia-Ukraine War?

The Russian invasion of Ukraine is the largest conflict that Europe has seen since World War II, with Russia conducting a multi-pronged offensive across the country.

The Russian military has pummeled wide areas in Ukraine with airstrikes and has conducted major rocket and artillery bombardments, resulting in large numbers of casualties.

Here is a look at some of the weapons being used in the conflict.

The Russian military has used warplanes and Kalibr (Caliber) cruise missiles to hit facilities throughout the country.

The Kalibr is a precision weapon, but Ukrainian military facilities and government buildings apparently targeted by those missiles in Kyiv and Kharkiv are located close to residential areas, resulting in civilian casualties.

The same applies to missiles carried by Russian warplanes, which targeted military infrastructure in strikes that also involved collateral damage.

To hit key targets, the Russian military also has used Iskander missiles that have a range of up to 500 kilometers (around 300 miles) and carry a much more powerful warhead that can destroy big buildings and some fortified facilities. Some Iskander missiles were reportedly fired from the territory of Russian ally Belarus, which has served as a staging ground for the Russian invasion.

Fire Out, No Radiation Detected at Ukraine Nuclear Plant After Russian Shelling 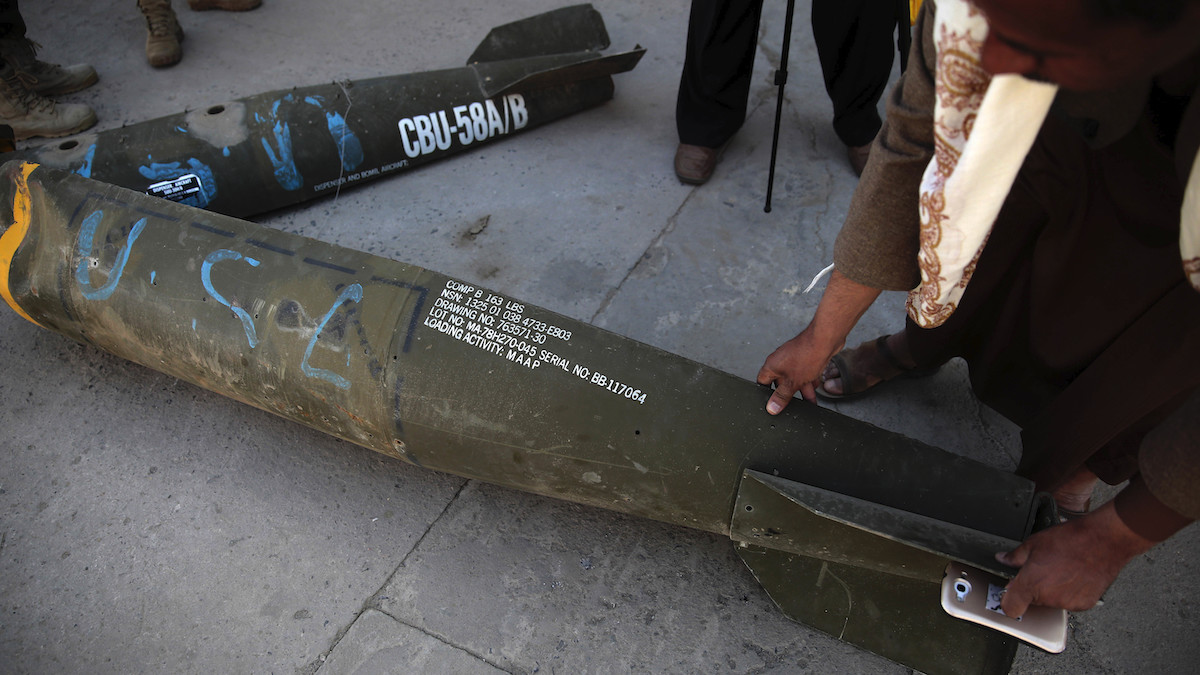 Russia Accused of Using Cluster and Vacuum Bombs in Ukraine. What Are They?

Ukrainian President Volodymyr Zelenskyy and other officials have accused the Russian military of indiscriminately shelling residential buildings, schools and hospitals around the country.

Images from Ukraine's second-largest city of Kharkiv that were verified by The Associated Press showed what appeared to be a barrage of Russian rockets hitting residential buildings in an attack that killed and wounded scores of civilians.

The Soviet-designed Grad (Hail), Smerch (Tornado) and Uragan (Hurricane) multiple rocket launchers are designed to fire a salvo of powerful rockets to destroy concentrations of troops or military equipment. Their use against populated areas inevitably causes heavy casualties and major damage to civilian infrastructure.

The Russian military also has a wide range of powerful Soviet-designed artillery units, which were bizarrely named after flowers, such as self-propelled 203-mm Peony and 152-mm Hyacinth and Acacia self-propelled howitzers.

Moscow has claimed it was only targeting military bases and infrastructure, but the AP has documented massive damage to civilian infrastructure and residential areas in Kyiv, Kharkiv and numerous other cities and towns across Ukraine. Russian officials have alleged that Ukrainian forces have widely deployed heavy weapons in residential areas to use civilians as shields, a claim that couldn't be independently verified.

The U.N. human rights chief, Michelle Bachelet, speaking at the Human Rights Council in Geneva on Thursday, said “most civilian casualties were caused by the use of heavy artillery, multi-launch rocket systems and air strikes in populated areas, with concerning reports of use of cluster munitions striking civilian targets.” She didn't specify which side may have used them.

Such weapons are designed to target enemy troops and weapons over a broad area, and their use in populated areas inevitably would lead to mass casualties among civilians.

Cluster bombs, rockets and artillery shells open in the air, releasing submunitions, or “bomblets,” that are dispersed over a large area and simultaneously hit multiple targets.

Beyond the initial impact, bomblets have a high rate of failure to explode, posing a long-time threat of killing and maiming people for a long time after they were fired.

Thermobaric weapons consist of a fuel container and two separate explosive charges, with the first detonating to disperse the fuel particles and the second igniting the dispersed fuel and oxygen in the air, creating a blast wave of extreme pressure and heat that creates a partial vacuum in an enclosed space. That makes the weapon particularly deadly for people in an enclosed space.

The Pentagon has said that Russian mobile launchers for thermobaric weapons were spotted inside Ukraine, but couldn't confirm their use.

The Ukrainian military has Soviet-era Tochka-U short-range ballistic missiles, which have a powerful warhead but poor precision compared to the latest Russian weapons.

In addition to its aging Soviet-made arsenals, Ukraine has received large shipments of Western weapons, such as U.S.-made Javelin anti-tank missiles and shoulder-launched Stinger anti-aircraft missiles. Ukrainian officials said the country's military has used them to inflict heavy casualties to the invading Russian forces.

The Ukrainian military also has used Bayraktar drones supplied by Turkey before the conflict. It has released a video showing an attack by Bayraktar against a Russian military convoy.

The fire was put out, and there were no victims, according to Ukraine's state emergency service.
Copyright AP - Associated Press